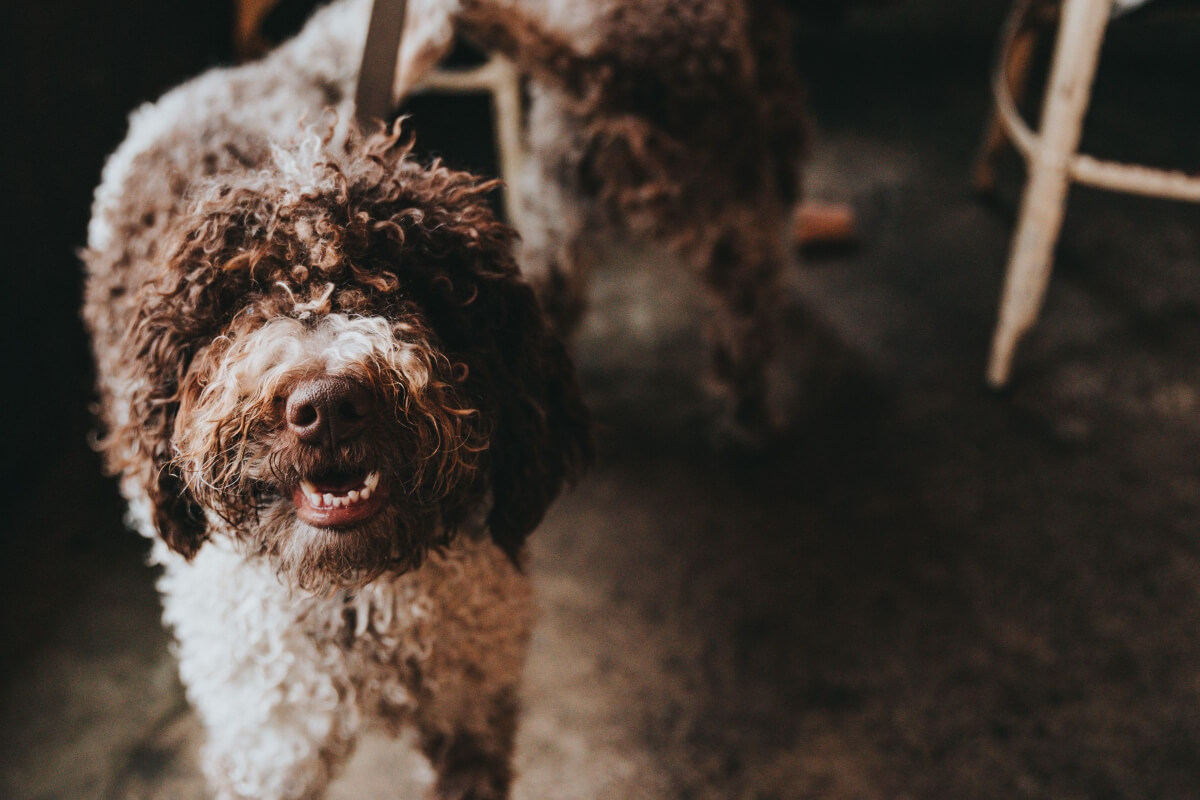 Your new dog will naturally feel anxious and nervous when he is still adapting to his new environment, which is your home. This sense of feeling will intensify during the night as he finds himself alone and lonely in the quiet night.

There are certainly things that you can do to help your dog to keep calm during the night without feeling anxiety while he is going through the adaptation “period” in his new home.

Things That You Can Do to Ease His Anxiety

To calm an anxious dog during the night, you would need to make him tired and ease his anxiety by making him feel that he is not alone. You can place his crate in your bedroom so that you are always within his sight or to make use of aromatherapy and music to give him a sense of relaxation.

Make Him Tired Before The Night

There is a saying that “A Tired Dog Is A Good Dog”. Plan for some games and exercise for your dog during the day so that he will get tired during the night and get to sleep easily.

Just like if you bring your kids out for a play during the day, they would not pester you during the night and would probably be going for a sleep without you having to ask them to do so.

Of course, you have to plan for the “right” activities for your dog, depending on his age and breed. The exercise had to be strenuous enough to make your dog let off his energy and keep his energy level low during the night.

Dogs who are less than 3 years old would typically be considered as “high energy” dogs and you would need to plan for at least 30 minutes of workout time for them.

Games which require a lot of movement from your dog such as Frisbee and Flirt Pole would be ideal choices.

For me, I love to play bubble games with my German Shepherd, and he simply loves chasing those bubbles that are floating in the air.

This simple game would really tire him out, and he would usually take a short nap right after playing this game. I would keep the play session to only 30 minutes to prevent him from over stretching himself.

You should also incorporate some mental games for your dog to make him utilize his brain power!

This is how I PLAN my games for my dog:

1. Get him to engage in some physical games during the day (preferably in the early afternoon) for about 30 minutes. I typically go for “Tug-Of-War”, “Chasing Bubbles” and “Flirt Pole” games.

2. Give him some mental simulation games to “exercise” his brain before his bedtime.

For this, I would give him some food dispensing toys so that he can use his brain power to get the treat out from these toys. He would usually be mentally tired after playing this game and would have no problem getting to sleep.

I would strongly recommend that you incorporate brain games for your dog before his bedtime as this really works wonders in making your dog tired. Just like if you are utilizing your brain power in learning new things, you would get tired easily.

Alternatively, a stroll after his dinner (to further release his energy) could be another option that is worth considering if you are available to take him outside.

He could also do his potty as well during the walk before his sleep.

As I had mentioned in the start of this post, your dog is likely going to feel lonely and get anxious as the night reaches.

You and your family members are going to be sleeping and no one will be with him for the night. This feeling of loneliness will certainly intensify if your dog is used to being with his pack members in the shelter home and now he sees himself alone in an unfamiliar environment.

You would need to help him to overcome this sense of loss and anxiety so that he is able to remain calm over the night.

This is when you should consider using a crate as your dog’s sleeping place.

“Crate” For Your Dog To Ease Anxiety?

Start with his sleeping area. I would recommend that you get a portable crate to act as a sleeping place for your dog.

A crate provides not only a personal place for your dog and can also act as a “hideout” for him whenever he feels that there is a threat, and he needs to protect himself from any harm. It is certainly what I consider as one of the best options for his sleeping and resting place.

Of course, initially your dog might be resistant to stay in his crate and you would need to spend some time crate training him to make him see the crate as his “den”.

The goal is to help him associate staying in the crate with positive experience so that he will be willing to stay in there for the night or even during the daytime when he needs to take a nap.

To accomplish this, you would need to make the crate to be very “luring” for him to be in.

Ensure that you get a crate of the right sizing for your dog. It had to be spacious enough for him to stand up, turn around and lay down comfortably.

I would suggest going for a wire crate as it comes with an “open” view design which will make it easier for you to keep an eye on your dog while he is in the crate and this also allows him to see you so that he would not feel lonely.

The idea is to make him associate good things will happen when he is in the crate and this will deter him from barking in the crate.

You can further reinforce this experience by feeding him in the crate. This will help him to know that when he is in the crate, all his basic needs (shelter, food and protection) are met. He even gets to play with his toys while in the crate.

Leave the crate door opened during the night as you would not want your dog to feel that he is being “trapped” in an enclosed area.

To ease his separation anxiety, you can also place the portable crate in your room (maybe on one corner of the room) so that he could see you from his crate during the night and would not feel lonely.

In case that your dog likes to go out from his crate and sleep on your bed, you would have to close his crate door but still leave the crate in your room so that he could still see your presence.

If you do not favor the option of having the crate in your bedroom, you can leave the crate in other places but place some of your old clothing in his crate.

Your old clothing will carry your scent and by having them in the crate, this will make your dog feel that you are nearby and will ease his anxiety.

Avoid Responding To His Barking Instantly

Never look for your dog immediately if you hear him barking in his crate during the night.

If you attend to your dog instantly when he barks, he will start to associate barking as the way to get your attention and will keep repeating this behavior whenever he feels anxiety and needs your attention.

You would certainly not want this to happen every night, breaking your peaceful sleep.

This is what you should do:

1. Go over to him only when he has stopped barking.

2. Reward him for being calm by giving him a treat or praise and attend to his needs. (maybe he needs to do his potty or feeling hungry).

Only reward him when he has stopped barking and NOT giving him reward to make him stop barking. The idea is to associate not barking with positive reinforcement (getting your attention and reward).

Build His Trust and Confidence

Nothing works better than attaining to your dog mental needs which is giving him your care and love.

As your dog is learning to adapt to your home, it’s important that you show him that you are there for him, and he should give you his trust to take good care of him.

This will certainly help to ease his anxiety and build his confidence level.

Make sure that you spend some quality time with your dog to build the bond and make him “see” you as his pack leader (the one who will take care of all his needs).

Watch On His Diet

Study has shown that excessive protein intake can lead to anxiety for dogs. If your dog is exhibiting signs of anxiety, you should do a review of the foods that you are feeding him and cut down on his protein and sugar intake.

Go for some organic dog foods and feed your dog at least 2 hours before his bedtime. This will give him sufficient time for his food digestion and to do his potty before he sleeps.

If aromatherapy works well for human beings, it will certainly be extremely effective for dogs given that their scent receptors are going to be much superior to us.

Aromatherapy (commonly known as essential oils therapy) works by letting your dog inhale essential oils such as Bergamot, Lavender, Sweet Marjoram and Rose Damask. These oils possess a calming and relaxing effect on your dog.

If you are observant enough, you would see that a veterinarian would apply a few drops of lavender oils on his palm, before he starts to handle any pets.

The lavender oil present in his palm would provide a calming effect on the pet so that he will have a better “control” on him.

Do not let your dog inhale the undiluted oils directly. You can do it by either:

1. Apply the oil on your palm and gently massage your dog’s chest or ear flaps. In fact, by just giving your dog a gentle message before his bedtime, it helps to give him a sense of relaxation and with the use of essential oil, it will provide an even much better effect.

3. Or you can apply 2 drops of the oil on his blanket in the crate where he would be sleeping in the night.

Listening to music is another approach to keep your dog from feeling anxiety or nervous. Go for this option if you are leaving your dog alone in his crate in another room.

By playing some light classical music in the background, your dog will not perceive that “silence” feeling when the night falls and this will certainly help to ease his anxiety.

You can also get him a thundershirt to wear, as this vet will give him a sense of security and offers that “hugging” feeling to him when he is feeling nervous.

Typically, when a dog reaches the age of 7 years old, he will be considered as a senior dog and certain illnesses related to aging will catch up with him.

He might be suffering from sleeping disorder which cause his anxiety during the night and make him restless.

He could also be suffering from what is known as cognitive dysfunction syndrome (similar to Alzheimer’s disease that happens to older folks).

Dogs with this condition often experience confusion and anxiety and medication might be needed to make him calm down.

Reach out to your veterinarian for advice and check up if you suspect that could be the case for your dog.