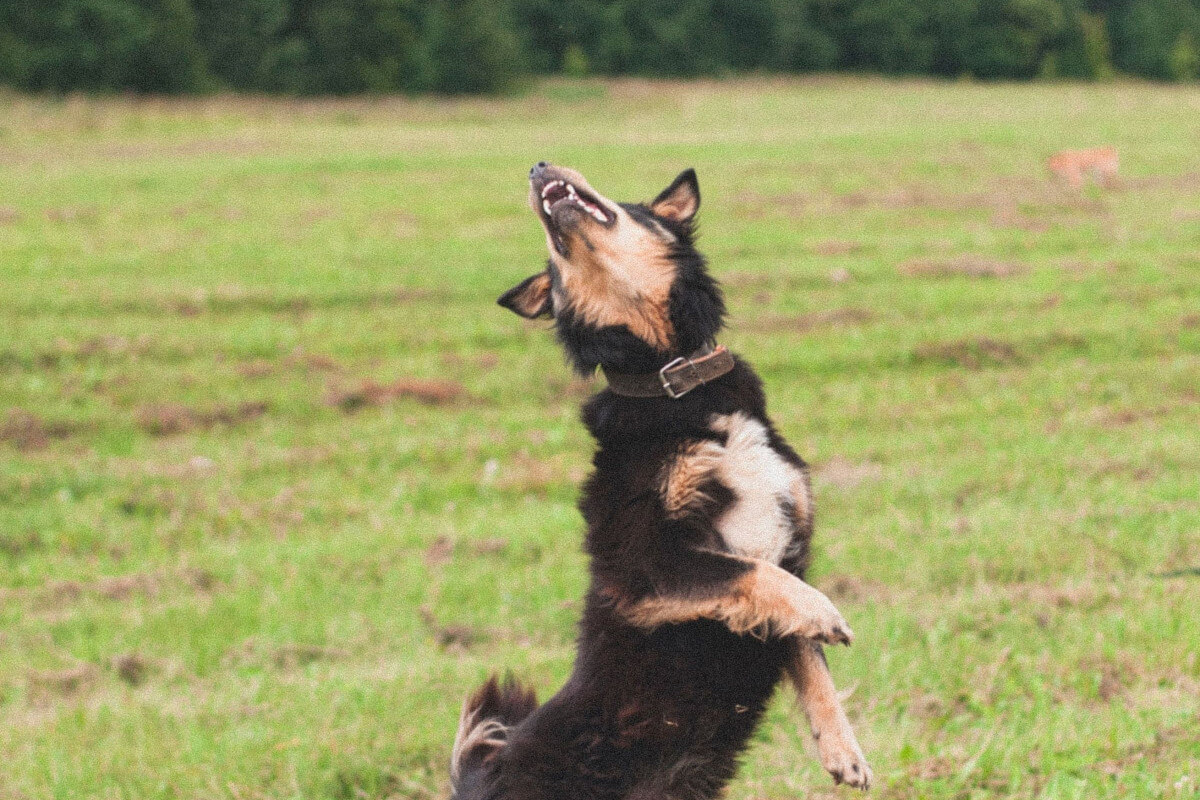 When German Shepherds reach the age of 2 to 3, they will start to calm down and become less agitated. And this is a trend that will continue as they grow up.

It is likely that by the time they are 7 or 8 years old, you will see a notable change in their behavior. While the dogs will still be engaged, they will not be as energetic as they used to be and will prefer to rest more.

Why Is My German Shepherd So Active?

German Shepherds are known to be one of the most hyperactive breeds of dog. This hyper behavior is likely due to the breed’s long history as a herding dog. When GSD are puppies and adults, their hyper behavior is at its peak and usually mellows out with age.

Their alertness and strong sense of curiosity instinct makes them commonly deployed as watchdogs and search-and-rescue dogs, and it is this hyperactive instinct that makes them difficult to calm down.

They have a lot of energy, and often, if they do not have an appropriate outlet to release that excessive energy, they will be restless.

So make sure that you have planned sufficient physical and mental exercise to help your dog release his pent-up energy and that should help to keep his energy in check.

Playing tug-of-war or fetch with your dog are both great physical exercises that can help your dog burn off his energy.

As for the mental simulation exercise, you can go for some obedience training as that will make him utilize his brain power and keep him mentally tired.

Why Is My German Shepherd So Indolent In His Golden Age?

GSD are considered seniors once they reach the age of 8 years old. There is a chance that they will start sluggish at this point as health related ailments start to occur.

These include dental problems, obesity (due to an inactive lifestyle), hip dysplasia, joint problems (their joints begin to stiffen, and it becomes difficult for them to run, jump, and play) and eye problems.

So it’s not unusual for them to become less active as they progress into their golden age. Their pent-up energy seems to have disappeared as they age and becomes more calm and submissive.

Therefore, don’t be alarmed if you find your dog becomes less hyper as he reaches his senior age. It’s perfectly normal for him to go through these changes as he ages.

It’s normal for dogs to become anxious and turn hyperactive when they are separated from their owners. This is especially true for German Shepherds, as they are known to be very protective of their families.

Separation anxiety will trigger a change in your dog’s behavior whenever he finds himself to be alone.

These behaviors are often associated with stress and anxiety, and they include excessive barking, whining, digging, chewing, and scratching.

Therefore, if your GSD becomes very restless, and starts to bark and whine when he finds you leaving the home, it could be a sign of separation anxiety.

Your dog may try to escape from the house when he is left alone, and this can cause him to behave in a very agitated manner.

Lack of confidence, finding themselves in an unfamiliar environment without their pack leader, and not having a safe place to retreat are the main causes of separation anxiety.

You can try to train your dog to be calm and relaxed when you are away through crate training. A crate is a small, enclosed area that your dog can go into when you are away. Your dog will learn to feel safe and comfortable in the crate.

If you don’t already have a crate, you may want to consider buying one. Crates come in different sizes and shapes, so you will need to consider what size will best suit your needs.

There should always be a comfortable bed inside the crate, and it should be an open view design so that when your dog is in the crate, he can still see from inside and won’t feel trapped.

At What Age Do German Shepherds Reach Their Peak of Aggression?

The German Shepherd’s aggressive behavior usually begins around the age of 3 to 6 months.

It appears to intensify during the adolescent stage, which comes between the ages of 6 months and 2 years, as the development of sexual maturity and the changing of hormone levels are occurring.

After they pass through the adolescent phase, which can last up to 2 years, you should expect them to calm down considerably.

Their level of aggression and excitement will never be the same as when they were adolescents.

What Can You Do to Calm A Hyper German Shepherd?

When your dog is hyper, you’ll want to identify the source of the problem. Is your dog hyper because of a medical condition? Is your dog stressed or anxious or simply feeling too bored?

If your dog is hyper because of a medical condition, your vet will be able to treat the problem.

As for the other causes of hyper, try to identify the root cause of the behavior. If your dog is hyper because of an anxiety issue, then you should focus on calming that behavior.

The key to controlling your dog’s hyper behavior is to establish a calm environment. When your dog is excited, you’ll notice that his breathing will become erratic, his eyes will dart around, and he may even pant.

A calm state of mind can help you calm down your dog. Talking to your dog calmly while walking can help him to settle down. If your dog does start to hyper, you can get him to calm down by distracting him with a toy.

Many people are tempted to reward their dog for hyper behavior as an attempt to make them calm down.

However, it can actually make the problem worse. If you reward your dog for being hyper, you are in fact teaching him that being hyper is a good thing. As a result, you’ll be giving your dog the idea that hyper behavior is acceptable.

Thus, you should only reward him for his calm behavior such as sitting and lying down in a relaxed manner.

Is Neutering My German Shepherd Going to Calm Him Down?

Neutering in general could affect a dog’s mood and his likelihood of exhibiting certain behaviors.

In the case of a neutered dog, his sex drive will be significantly lower than it used to be.

And since the stimulation that triggers the aggressive instinct of your dog is reduced by neutering, it is likely that the aggressive nature of your dog will improve. His territorial instincts will also be dulled slightly, and it will not be as frequent as before.

Neutering, however, may also lead to him acting in fear due to the loss of self-confidence, but this is often a temporary reaction.