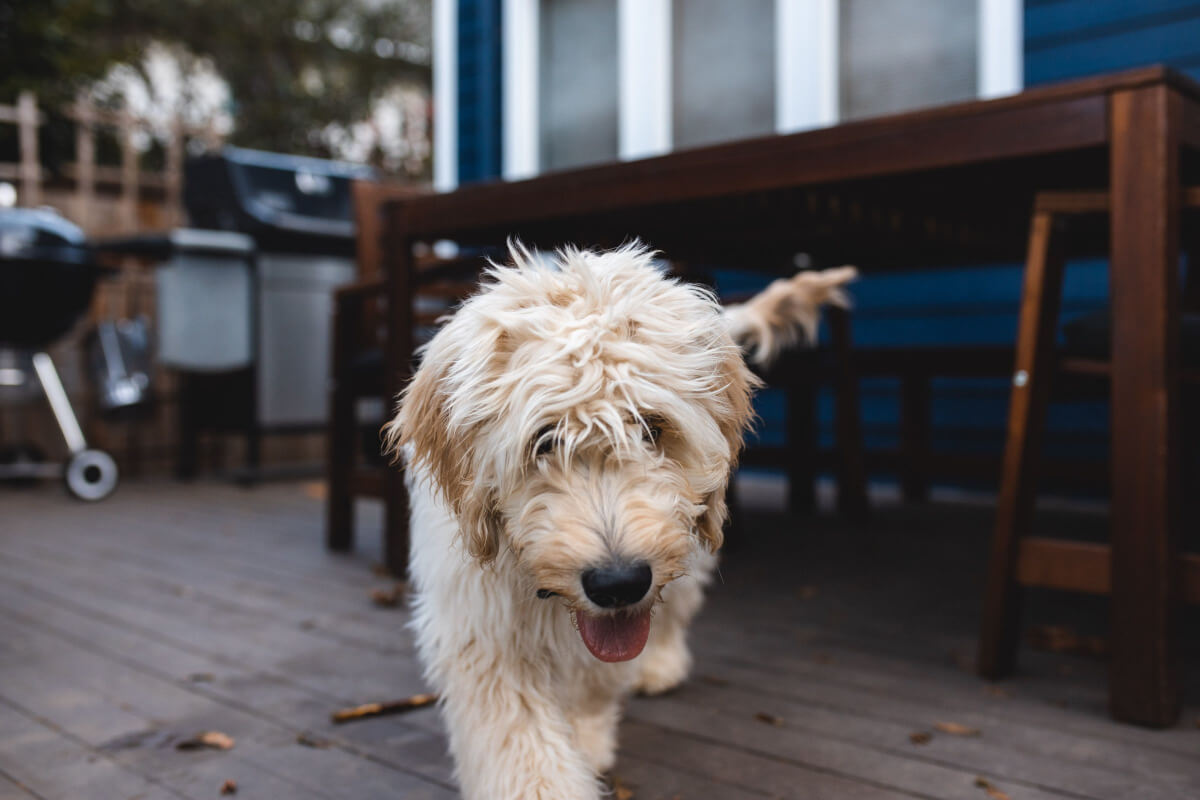 Everyone in your family is so excited when you bring back a lovely dog to be part of your family, but that excitement slowly fades off when the dog starts misbehaving in the house.

Chewing on things that he can have his mouth on, keeps jumping and running around in the home, not coming when you call him, barking at the door, eliminating everywhere and eating his poop becomes his habit.

You would certainly need to correct his behavior soon enough before things get out of control.

Get your dog to behave in the house through obedience and impulse control training. House training is also a necessity if he is not yet potty-trained. Becoming his pack leader will certainly help to gain his trust and have him follow your instructions and guidance obediently, making your training a breeze!

Giving him too much freedom way too early is the number #1 mistake that you might have made when you first brought your dog back home.

You are not controlling his environment and giving him way too much freedom will make him develop bad habits such as digging the trash, potty accidents, chewing up possessions, jumping on you and not coming when you call him.

When your dog is in your house, it doesn’t mean he is in a “controlled” environment. Just like your toddler, you would keep him in a baby playpen to keep him out of trouble when he is still in the learning phase.

You should do the same for your dog. Allocate a personal space for him (a crate might be a good choice to consider) and only bring him out when you are training him and under your supervision.

Bad habits are going to be much more difficult to reverse than simply preventing him from picking them up.

Having him on a leash is one option to restrict his movement. In this way, you can have some control over his action and give him the instance feedback on what you prohibit him from doing.

Of course, you can’t expect to keep your dog in his crate or have him on a leash for the whole day, so the other alternative is to use a pet gate to prevent him from having access to the entire house.

Restrict him to maybe a room where he is less likely to create havoc and you can slowly open up the area once he is well-trained to behave himself.

I would consider a well-behaved dog as one that possesses good impulse control and would follow each and every of your instructions diligently.

If you are hoping to have a well-behaved dog, your very first step would be to train him on some basic obedience commands so that you can exercise some “control” over him when he misbehaves.

Basic commands such as “Sit”, “Stay”, “Down”, “Come”, “Drop it”, “Leave It” are essential for your dog to learn. These are the fundamental commands to make him listen to you.

To make your obedience training a success, you should make use of positive reinforcement to reward your dog when he listens and obeys your instructions. This will help him to associate executing your command with getting a reward (positive experience for him).

So the next time when he misbehaves (jumping around), you can use the “Sit” command to make him sit down and offer him a reward for being obedient.

Or if you find him chewing his bed, you can use the command “Leave It” and reward him if he ceases his chewing action.

Another common scenario will be your dog jumping on you whenever he sees you back from work or jumps on your visitors.

This is often the sign of poor impulse control. Your dog acts on what he likes without considering the consequences. You need to let him know that there would be some negative consequences for the actions that he had taken and this will make him think before he acts.

For this “jumping” case, what you should do is to turn your back against him whenever he jumps on you (he had hoped to get your attention) and move away from him.

This will make him learn that by showing his excitement (jumping on you), he is getting negative consequences (you are leaving him) and this will deter him from repeating this behavior.

You can look for him after he has calmed down and offer him a reward. This will help to associate being calm (without jumping) with positive consequences (getting your attention and reward).

Just like when you have a new tenant, you would probably let him know what are your house rules, the Dos and Don’ts and what to avoid doing.

This applies to your new dog as well. He will be bringing his old habits which he had picked up from the previous shelter or animal home and it’s your duty to retrain him and let him know your house rules.

And one of the BIG topics is potty training. If your dog had the habit of doing his pooping at night, this is certainly going to be a big concern for your family.

Who would like to go around cleaning his wastes and even worse, he might have done his elimination in some “hidden” corners that you would have never thought of!

To start working on potty training for your dog, it’s important to ensure that your dog is not suffering from any health issues (such as Urinary Incontinence) that could potentially cause his potty problem. Bring him to a vet for a medical check up.

Once he is clear from any medical problem, you would need to work on his potty training.

Following are the steps:

1. Workout a fixed routine that includes his feeding, playing and sleeping schedule.This is important as your dog will need to do his potty after he has his meals, after his playing or when he wakes up from a nap. With this schedule, it would help you to plan for his potty.

2. Choose a designated spot outside for his elimination and bring him to this spot for his pee and poo. Remember to reward him as soon as he is done with his potty. This is to help him associate doing his potty in this spot with getting a reward to create a positive experience for him.

3. Keep repeating this training till he is used to doing his elimination in this spot.

4. If you find your dog going round in a circle, scratching at the door, sniffing around or behaving restlessly, it’s his way of telling you that he needs to do his potty. Bring him out immediately to the designated potty spot.

5. In the event that your dog had an accident, do not ever scold or yell at him. Simply clean up the mess and move on.

Remember to use special detergent to clean up the messes to prevent your dog from revisiting this spot for his next potty. The urine scent had to be thoroughly removed to prevent the scent from leading your dog back to the same spot.

This is what I do:

1. Sprinkle some baking soda on the urine spot.

2. Wait for about 5 minutes for the soda to neutralize the urine smell.

3. Clean up the soda using a vacuum.

Be His Pack Leader

There are many benefits of becoming your dog’s pack leader. One of the main advantages is that your dog will trust you and follow your commands obediently.

In the dog’s world, the pack leader holds the highest social structure ranking and all pack members will have to follow and obey him.

So if you make your dog “sees” you as his Alpha, he would be more willing to listen to you and do what you ask him to do.

Just like a kid will behave himself in front of his parents!

To be your dog’s Alpha, this is what you should do:

1. Make sure that your dog sees that you eat first before he has his meal.

2. Make your dog wait at the doorway and you should walk through first before giving him the release clue.

3. Make sure that you are always at a higher level than your dog.(Do not allow him to sleep on your bed).

4. Make eye contact with your dog and hold his graze. Stay in focus till he looks away.

5. Ignore your dog’s attention if he jumps on you upon seeing you. As an Alpha, you will decide when you would want to give him your attention and not when he requests for it.

Let Off His Excessive Energy

As the saying goes “A Tired Dog Is A Good Dog!”. This is certainly something that you ought to work on.

Make sure that you have a routine schedule to keep him engaged with some physical and mental exercise to drain off his excessive energy and make him tired.

Depending on the age and the breed of your dog, you would have to plan the games and exercise in a way that is strenuous enough to release his energy level.

For a dog that is less than 3 years old, he tends to be very energetic and active and if he is a hunting dog breed, this makes him a “natural athlete”. You would have to plan for at least a 30 minutes of workout session for him daily.

I would encourage that you plan for physical games such as “Tug Of War”, “Frisbee”, “Flirt Pole” for your dog as these games would need him to move around, making him release his energy.

You should also incorporate some mental games for your dog as games that need your dog’s brain power will make him tired easily.

Get some food dispensing toys for your dog and let him figure out how to get the treats out from these toys. This will not only train his thinking but also make him wear out.

Obedience training is certainly considered as one of my favorite mental exercises for my dog as he will learn to understand my commands and to know how to execute them. This certainly needs brain power!

Don’t Yell At Your Dog

This is certainly going to do more harm than good. You see, when your dog is misbehaving (maybe he is chewing on your carpet) and you start yelling at him, you might be at the risk of “breaking” the bonds that you have previously built up with him.

Your dog is certainly not going to know that chewing your carpet is not the right behavior when he sees you yelling at him. In fact, this might make him even more excited about his action and will keep doing that behavior.

You should instead remain calm and use his favorite treat to divert his attention to you and give him the reward when he gives up his chewing.

The key point is to make him learn that he is not getting a reward for chewing the carpet, rather he is getting the treat because he stops chewing and doing what you ask him to do!

You can also make him do some obedient commands such as sit or lay down to earn his reward.