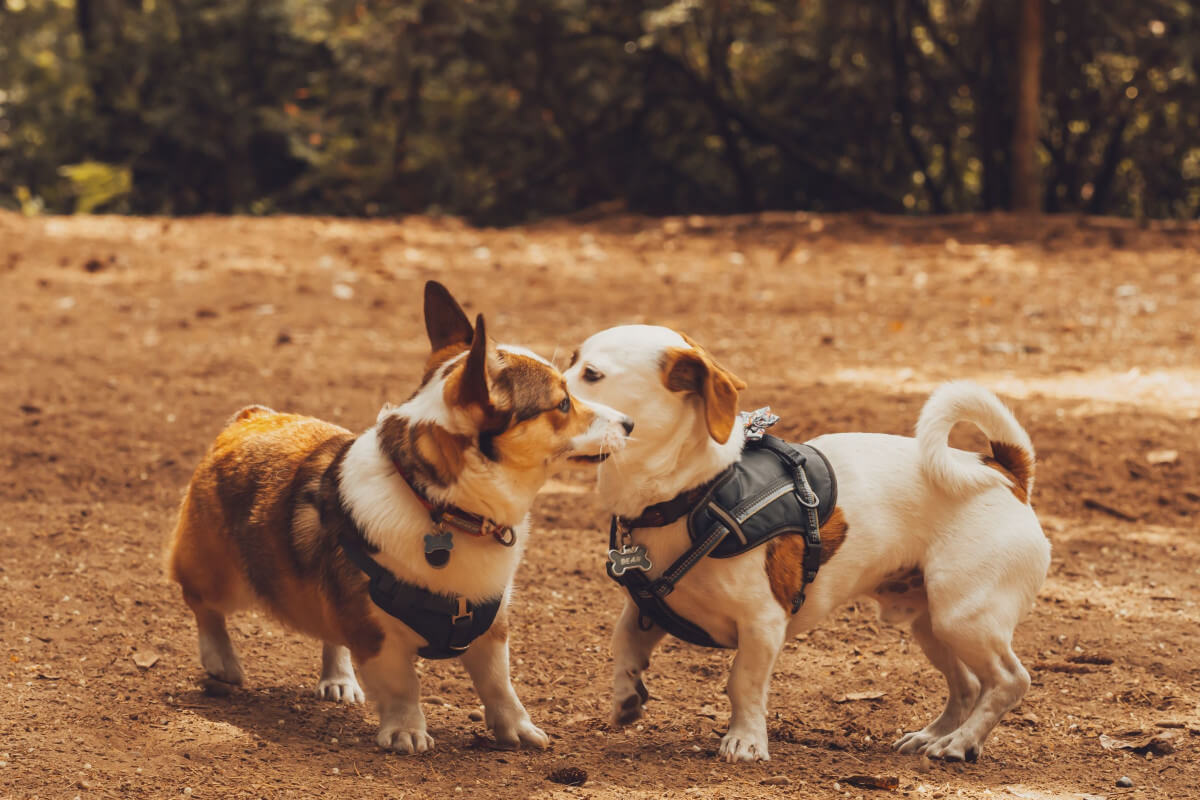 I’m sure that you will find it warming to see your dog enjoying himself so much when he is play fighting with another dog in the park.

But why does he keep sneezing when he is playing?

Is he having a reaction to the dust or dirt during his play that stimulates the membranes in his nose, causing him to sneeze?

Or is there more to that?

Dogs sneeze during their play fighting to exhibit their friendliness and ease their excitement. Environmental stimuli such as dirt, dust mites, pollen and grass could have irritated their noses, or they had a cold. He is sending a signal to his playmate that he needs a break or to cool down the rough play.

This is probably just a “play sneeze” and your dog is showing his playfulness to his playmate.

He is letting the other dog know that he is no threat to him. Everything he does is only for fun!

He feels excited playing with him and enjoys his company.

You will likely see him wagging his tail with a relaxed body that comes with higher pitched barking and running in a figure of 8 chasing after the other dog.

Occasionally, he may roll on his back to express his happiness in the play.

This is your dog’s way of saying hello to another dog and exhibiting his desire to play with him.

He Is Feeling Excited

During your dog’s play, his excitement level will increase and this will cause his chest muscles to contract and lead to an increase in pressure.

And when he sneezes, it helps to relax the muscles and makes him calm down.

So it is common for dogs to sneeze more shallowly and emit a snorting sound when they are feeling excited.

This is their way to relieve their excitement and anxiety.

I’m sure that you will probably have encountered a situation when you walked into a room and found yourself sneezing.

This could be caused by the cold breeze or air freshener in the room that triggers your allergy.

The same situation can happen to your dog.

When your dog is play fighting with another dog, he will be stirring tons of dirt, dust mites, pollen, grass or even small insects from the grass or ground into the air.

These “stimuli” will get inhaled by your dog and cause him to be constantly sneezing as his nasal membranes get stimulated.

His body will naturally try to clear his airways of foreign material through sneezing.

When he sneezes, the air in his lungs is forced out through his nostrils and this helps to expel any irritants such as grass that gets stuck in his nose.

It can be very uncomfortable for your dog, especially if the “stimulus” triggers his allergy conditions, and you will find him with allergic symptoms such as watery or red eyes, itching or running nose, skin irritations, persistent sneezing and even diarrhea.

If you find your dog with either of these symptoms during his play, stop the game and take him to see a vet immediately.

A Signal That He Wants A “Break”

There will be a time when your dog is exhausted from playing and wants to take a break.

Unlike humans, where we can communicate verbally, dogs have to use other alternatives to let their playmates know that they need a break to “recharge” their body.

And the universal language for dogs to communicate that message to each other in their world is through sneezing.

So do not feel surprised when you find their play fighting stops suddenly when either of the dogs sneezes.

They are saying “Enough! It’s time to take a break!“.

To “Cool” Down The Rough Play

Your dog will sneeze when the play gets too “rough” to let the other dog know that the game is out of hand and needs to cool off.

This is a way for dogs to communicate with each other that the situation has gotten too “hot” and to avoid any tension, they should tone down the play fighting.

He Gets A Cold

Just like you, your dog could possibly catch a cold and start sneezing persistently.

This could be the case when he is playing outdoors in cold weather without any weather protective gear such as a sweater to keep him warm.

This is especially so if your dog belongs to a breed such as Pug, Bulldog, Boston Terrier, Dalmatian and Great Dane who have short furs.

He can catch a cold easily as his coat is unable to provide him with sufficient warmth.

If your dog has a weak immune system, that will increase his chances of getting sick after getting a cold.

Some common cold related symptoms include wet sneezes, red and watery eyes (occur as a result of nasal discharge) as well as heavy breathing.

In the worst cases, your dog could get pneumonia, which can be extremely serious and even fatal.

Generally, you should ensure that your dog’s body temperature stays above 45°F to prevent him from getting a cold.

If you see your dog sneezing repeatedly, and he seems tired or exhausted with nasal discharge, it is best to take him to see a vet as soon as possible.

Dog Breeds That Are Prone to Sneezing (Brachycephalic)

Dog breeds with flat faces, like Brachycephalic, are more likely to sneeze due to the way their airway is structured.

They have a narrower nasal cavity and shorter nasal passages than other dog breeds, which can cause them to be more susceptible to sneezing.

So do not be surprised to find your dog sneezing frequently if he is a Brachycephalic breed.

Do Dogs Sneeze To Show Aggression?

You see your dog sneezing at the other dog’s face and when he does this, the other dog backs off for a second, but then rushes back at him again.

You may be wondering if your dog is trying to show his aggressiveness to the other dog?

Dogs do not exhibit their aggression through sneezing and, on the contrary, sneezing is their way to extend their friendliness to the other pack and telling them that they are just playing around and having fun with them.

That is the reason why when your dog sneezes at the other dog, he simply backs off for a second to gather his thoughts (Okay, I will accept his invitation!) and comes back to him again to play with him.

The easiest way to identify aggression in dogs is through their body language.

When your dog exhibits signs such as excessive growling, barking, baring his teeth, stiff body with standing tails and erected ears or direct staring, it is a clear indication that he is exhibiting aggression towards the other dog.