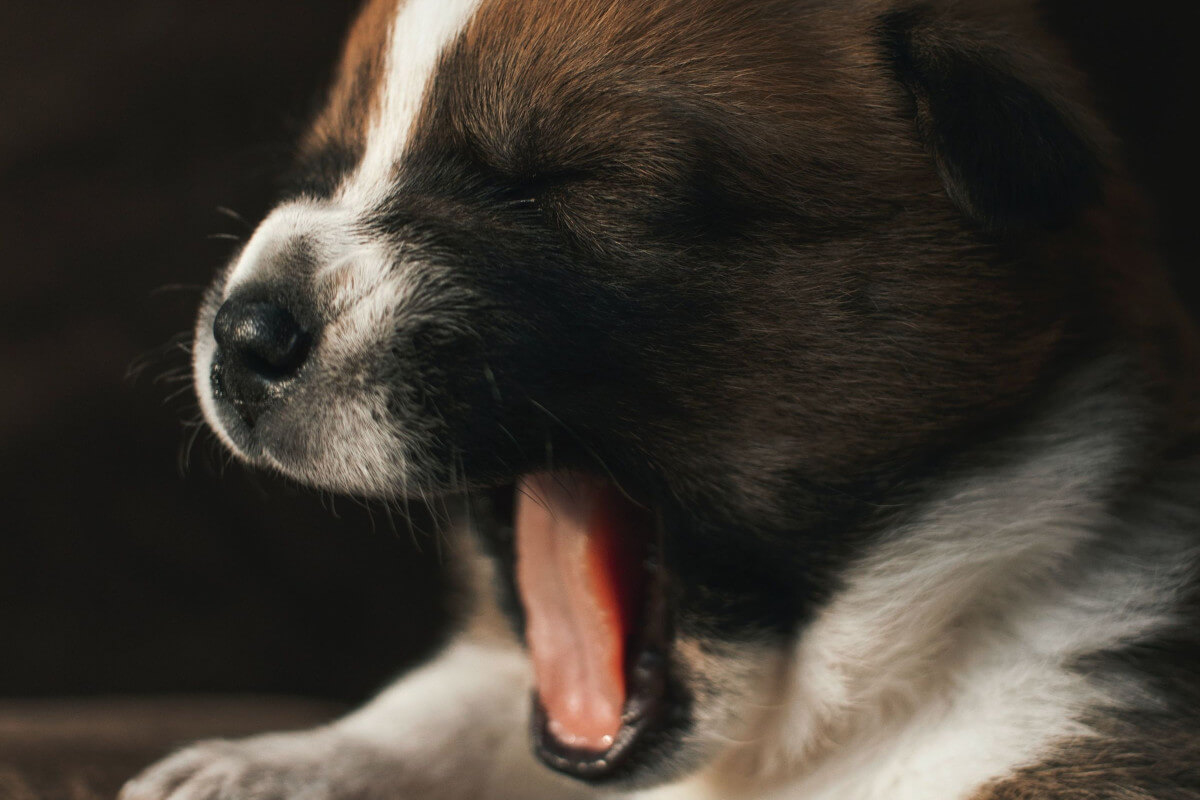 As you are giving your dog affection by petting him, you see him keep yawning and wonder if he yawns because he is tired or if there are other reasons behind this?

A dog yawns when you pet him because he’s having body discomfort and does not like to be touched. He sees you doing that yawning and starts to imitate you. He feels excited when you give him that petting touch. He gets tired or bored and yawns naturally. He is expressing his friendliness to you.

He Is Having Body Discomfort

Yawning is one of the common behaviors that your dog will exhibit when he is feeling discomfort and is also his way of calming himself down.

This makes you wonder why he feels discomfort when you pet him?

Shouldn’t petting be something your dog is always looking forward to?

This can be best explained by the fact that your dog is suffering from some joint pain, injury to his body or inflammation in his coat and when you pet him, he is undergoing tremendous discomfort.

He will then start to yawn to relieve the tension.

So keep a lookout for any sign of skin disorder or joint pain in your dog, in particular if he is reaching his senior age.

You would also likely see him hiding away from you as a way to avoid being pampered.

He Loves That Petting Touch

When was the last time that you had a private session with your dog?

If you have not been spending time with him, he is going to get very excited when you start giving him attention, in particular with that human touch (petting).

And excitement can cause your dog to yawn.

It is a natural response, and there is nothing to worry about.

He feels safe and relaxed with you beside him.

He Sees You Doing That (Yawning)

It’s probably a learned behavior that he had observed from you.

If you tend to yawn when you are petting your dog, he is going to pick up this habit.

He is going to think that since you keep yawning, it has to be an interesting behavior that he should imitate.

As he is not getting any corrections from you, he will keep on performing that yawning whenever you are petting him.

He might even associate yawning with your petting and will start yawning whenever he wants you to pet him.

So, if you want your dog to stop this bad habit, do not let him see you doing this yawning and ignore him the moment he does that behavior.

This will make him learn that yawning is NOT going to get your attention.

He Feels Tired Or Bored

You see, yawning is a natural reaction for your dog to exhibit when he is feeling tired.

He is trying to release the tension and fatigue from his body.

So, if your dog has been engaged in some kind of activity that has exhausted him, he may begin to yawn as a way to relax when you give him a pet.

This is completely normal, and he will likely continue with his yawning till he gains back his energy.

Of course, boredom could also cause your dog to yawn.

As there is less movement or activity happening around him, he will be in a “static” state and his body will be in a relaxed position, which could trigger yawning.

Your dog will likely stop his yawning when you give him some chewing toys to keep him occupied.

To Show You His Friendliness

In the wild, dogs yawn to demonstrate their friendliness in their pack and tell them that they are non-threatening.

This instinct behavior is still practiced by dogs even as they no longer live in the wild.

So, when you pet your dog, he is feeling happy and content, and he is yawning to show you his friendliness.

He is telling you that he likes your pet and is showing you his submission.

Your dog is expecting that you are going to take him out for a walk after your regular petting session, and he keeps yawning to show his excitement.

He is very enthusiastic about this excursion and has been patiently waiting for you all day.

Yawning is his way of expressing his excitement and to get his body “prepared” for his trip.

As he yawns, he will need to breathe deeply, and his lungs will be filled with oxygen, which is transferred to his brain.

This will keep him in an active state and be ready for his upcoming adventure.

He Is Feeling Nervous

Are you the only one beside him when you are petting him?

You see, your dog will naturally feel uneasy when he is around people that he does not know.

He is unsure if that person will be good to him or be of a threat to him.

This is likely the case when you have a new member or visitors in your home that he is unfamiliar with.

He will get nervous and yawning is his way of signaling to you that he feels stressed and is trying to relax.

Yawning will release dopamine in his nervous system and cause him to feel relaxed.