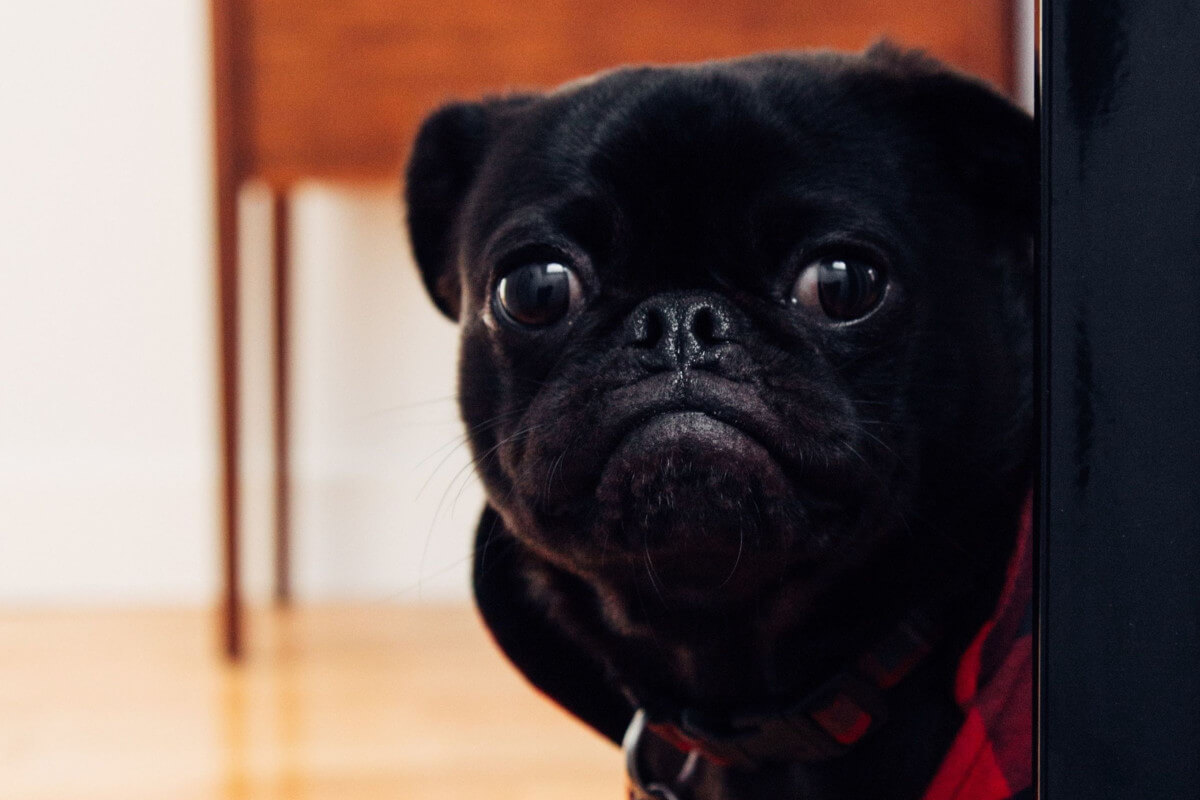 If you have a dog, you know just how upsetting it is when he refuses to come to you or if he won’t stay near you for any moment?

And you may be wondering why he is acting strange and avoiding you?

Well, if he is, there’s a good chance that he is suffering from some sort of behavior problem or maybe physical discomfort.

By understanding what’s causing your dog’s abnormal behavior, you’ll be able to fix the problem.

So, what are the reasons that caused him to react in this manner?

Your dog is avoiding you because of emotional factors, such as fear, guilt, depression, losing his trust in you, or you are encouraging him to do so. It could also be due to health issues such as arthritis and dementia.

BAD Experience With You

You see, when a dog fears something, he will do almost anything to avoid whatever it is that has frightened him.

You will see him cowering under a table when you approach him, running away from you the moment you have eye contact with him, sleeping in a closet or even hiding in a bathtub just to hide from you.

What you should do is to identify why he is being fearful of you?

Has he had a bad experience with you lately?

Have you scolded or yelled at him loudly or even physically punished him?

Or is he feeling sad after a haircut that you had forced him to go through?

That will grow his fear of you.

Even if you haven’t been “BAD” to him, maybe he has had an unpleasant experience with his previous owner and that has made him fearful of humans.

Or maybe he doesn’t get to know you well yet, and he just doesn’t feel comfortable with you.

What you should do is to earn his trust in you and make him see you as his pack leader.

The one who will take good care of him and protect him from harm.

He will eventually come to realize that you are not a threat to him and will feel safe with you.

Your Change Of Look Frightens Him

Did you make appearance changes recently, such as cutting your hair bald or putting on a pair of glasses?

These changes in look could possibly make your dog unable to recognize you and see you as a stranger.

That would make him wary of you and stay away from you.

He won’t be willing to interact with you as he used to do in the past because he will feel uncertain about you.

And in some cases, it could even provoke aggression from him as he is trying to protect himself from a stranger (which is YOU!).

So, if you need to make any changes to your appearance, make sure that you make these changes “gradually” so that your dog will slowly adapt to your transformation.

You could have been scolding or punishing your kids for their misbehavior and that very moment is being “captured” by your dog and stirring his fear in you.

This makes him perceive you as a very stern person, one who will lose your temper frequently and with great intensity.

This, in turn, will make him fearful of you, and he will avoid you at all costs.

He will be more on edge and alert whenever you are near.

His behavior will change radically and for the worse.

If he used to love to curl up next to you on the couch, now he will want to keep a much greater distance from you.

He may growl if you try to get near him.

This will be the “default” behavior on his part till he sees your “good” side and gets to know you better.

You would have to work hard (build trust and bond) to give him that “good” impression.

You Are Losing His Trust

Your dog is giving you a cold shoulder (ignoring you) because you have not been taking good care of him, and he is starting to lose his trust in you.

This is causing him to stay a distance from you as you are now a stranger to him.

You will find him sitting alone in another room rather than staying with you.

If that is happening, recall if you have been ignoring him and not giving him the love and attention he deserves?

When was the last time that you had a walk with him, brought him to a dog park, had a one to one session playing with him or giving him that belly rub he is hoping for?

You see, these interactive activities are the foundation for your dog to build his trust and bond with you.

So make this a priority!

If you do this every day, it will pay off and your dog will see you as his Alpha (someone that he can depend on) and not as a stranger that he fears and starts to keep a distance from.

Keep in mind that trust is the most important “ingredient” in a successful relationship with your dog.

If he doesn’t trust you, it will affect how he feels about you, how he treats you and how much he loves you.

You Had Encouraged His Behavior

You may have unknowingly encouraged him to stay away from you by rewarding him with this behavior.

Did you offer him treats or praise him just to make him stay away from you because you are busy and don’t want to be interrupted?

If so, you are motivating him with this behavior.

You see, offering a reward (treat or praise) will often cause an unwanted behavior to be repeated, as your dog will find it to be a rewarding experience.

So what you need to do is to “reverse” your dog’s thinking.

Make him learn that it is much more rewarding to pay attention to you rather than avoiding you.

To accomplish this, you would need to prepare some high value meat treats that your dog simply cannot resist.

Use these enticing treats as a “lure” to make him come to you willingly and, over time, he will quickly learn that he gets these kinds of rewards whenever he comes to you when he is called.

Remember, using this technique is not the same as “forcing” your dog to come to you.

It is more like making him know that GOOD things will happen when you call his name!

This will take some practice, but with a little effort, you will soon have a very well-behaved dog that responds to your every command without hesitation or question.

You see, whenever your dog feels discomfort or pain, he has a tendency to withdraw and isolate himself from the rest of the world.

He is also likely to yawn when you pet him as yawning helps to relieve his tension and pain.

You will find him becoming less active, not willing to move around and even scared of stairways (whenever he needs to climb up the stairs), as this action brings him great pain.

This is in particular if he is an older dog (more than 10 years old) and suffering from arthritis.

He is keeping a distance from you because he doesn’t want you to pet him as that would only aggravate his joint discomfort.

He could also be suffering from a ruptured eardrum which makes him unable to hear your calling.

So it is not really that he is avoiding you for this case, but just that he couldn’t hear that you are calling for him.

Thus, it is important that you pay more attention to your senior dog and make an extra effort to ensure that he is well taken care of.

If your dog is more than 10 years old, he is reaching his senior stage and could be suffering from some common elderly health discomfort such as arthritis or dementia.

In the event that he is suffering from dementia, he may not be able to recognize you.

This makes you a complete stranger to him.

And that explains why he is avoiding you as he feels that you are a threat to his well-being.

He is simply doing what comes naturally to him, which is to keep himself from harm.

It is important that you accept this behavior for what it is and offer him whatever comfort you can.

Your dog could be feeling guilty because he has done something that he knows is wrong, such as peeing around the house, digging the trash or chewing on the furniture.

He is worried that you would get angry with him because of the accidents that he had made and keep himself away from you.

If your dog is feeling guilty, it is up to you to help him feel better by giving him some type of reward and letting him know that you are not angry with him.

You could offer him a little treat, such as a small piece of chicken, or a rawhide bone.

It is important that you keep calm and never scold or yell at him when you do see the accidents he has made.

Always correct him immediately if you catch him in the act and work on ways to minimize the possibility that he will have these accidents again.

He Is Feeling Depressed

I’m sure you would have come across a circumstance when you needed that “moment of peace” and do not wish anyone to disturb you.

This is often the time when you are feeling depressed or upset.

Your dog could also have his depression period and that is when you see him keeps avoiding you as he wants to be alone.

This could be the case if his companion had passed away or had left your home, and he is feeling lost.

He needs a personal space to do his “healing” so that he can get out of depression and back to his normal self.

All you have to do is give him some space and time, and he will come out of it.

Just be patient and don’t force him to pay his attention to you.

Your dog will miss his buddy for a period of time. He is going through some sort of emotional changes and will need time and space to adjust to these changes.

You can help him by getting him a new companion who can keep him company, play with him and bring him out of his depression (from losing a companion).

This will help him regain his positive energy and cheerfulness.

Remember, dogs are very social animals and need human or peer companionship for their mental, emotional and physical well-being.