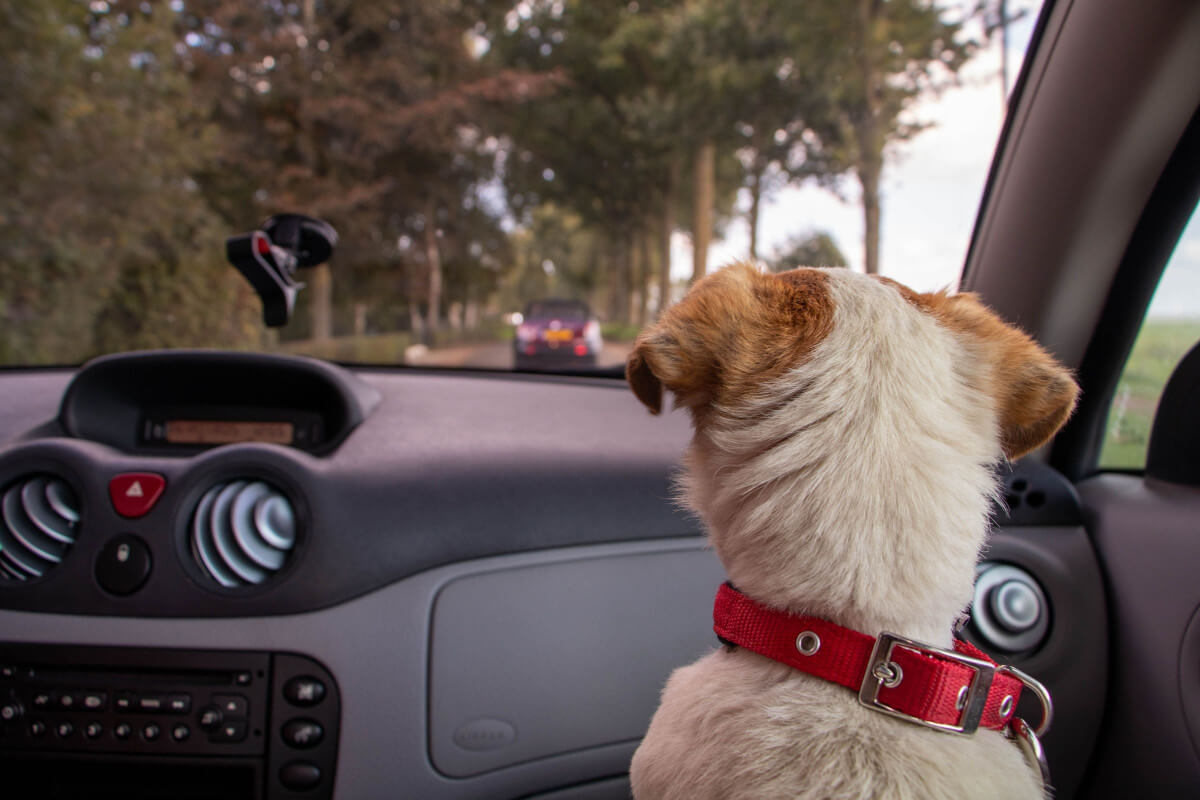 Fearful or anxious dogs will usually poop in reaction to environmental factors that are uncomfortable for them. If your dog is not used to riding in cars, he is likely to react in this way.

Apart from that, if he is feeling queasy as the result of car sickness, that could also result in him pooping in the car.

Having said that, there could be more reasons as to why your dog keeps pooping in the car and let’s find out more from this post.

He Is Feeling Nervous In The Car

If this is the first time that your dog is taking a car ride, it is inevitable that he is going to feel stressed in the car as it is going to be a very unfamiliar place for him.

The noise, lights, smell and other things that are going on in the car can be rather frightening for a dog.

This is especially so if you are using a strong air freshener in your car or have the habit of smoking or eating in the car.

The scent left behind by these activities can cause your dog to feel uneasy.

Your nervous dog may start to exhibit behaviors such as elimination (i.e. peeing and pooping), destructive behavior (i.e. chewing on the seats), licking his paws, barking and crying. He may also pant excessively in the car.

To calm him down, you might want to distract his attention by giving him something to chew on so that he does not feel too anxious.

Turning on the music in the car or giving him a gentle massage will certainly help in easing your dog’s anxiety.

Use circular motions to massage both sides of your dog’s spine. Continue to massage your dog until you reach his back legs and tail.  This will make your dog feel calm and relaxed.

You can also make your dog wear a thundershirt as this is known to have a calming effect on dogs.

A thundershirt is a garment that covers a dog’s chest and belly. It exerts gentle, consistent pressure to your dog’s body in the same way that cuddling does.

Research has shown that this kind of pressure stimulates the release of a relaxing hormone like endorphins, which is the reason why we enjoy hugs so much!

Most often, pet owners use thundershirts for their dogs who suffer from fears and anxieties such as separation anxiety.

Having better control over your dog’s behavior will make him more comfortable in the car.

Diarrhea Is Plaguing Him

If your dog is suffering from diarrhea, he will not be able to control his bowel movements and that would lead him to pooping in the car.

This is something that your dog has no control over.

Often, you will find his poop to be in liquid form with no solid pieces.

So, keep a lookout on the “shape” of your dog’s poop and if it is of normal consistency, then there is no need for you to worry.

But if it is watery in appearance, then you should take him to the vet right away.

Common conditions that lead to your dog having acute diarrhea include a change in his dietary regime, eating garbage, toxic or aggravating materials.

This disorder can also be due to stress, especially if he knows that you are taking him to see a vet on the car ride.

He Is Suffering From Fecal Incontinence

This often happens to senior dogs who are more than 10 years old where they could be suffering from some health – related disorder such as bowel incontinence.

It’s impossible for them to control their pooping when the urge hits.

It could also be the case that your dog is still a young puppy, and he has not learned how to control his bowel movements.

This leads to pooping on the car ride if he has just had his meal before the trip.

Loud Noise From The Passing Car Startled Your Dog

If your dog is suffering from noise phobia disorder, he can be easily startled by any noise that he considers to be a source of threat.

In fact, it can cause him to react with a lot of fear and stress and make him have submissive urination or pooping.

Even though the situation (such as a loud, fast moving car overtaking you or someone honks at you) only happens for a few seconds, it can still be extremely stressful for your pet.

What you can do is to keep the windows of the car closed and turn on soft music to distract your dog’s attention.

You can also prevent your dog from feeling stressed or anxious in the car by putting on a thundershirt on him.

He Is Marking The Car As His Territory

Your dog will do this because he feels like the car is his territory. It is a new and exciting place for him, and he wants to make it his own.

This is especially so if your dog is a territorial dog breed such as a Doberman Pinscher, Rottweiler and Bull Mastiff.

You will have to train him to let go of his possessiveness since he will be very protective of his space.

When he is in a car, he will mark his territory by making his scent as strong as possible. This can be done by marking the seat with his urine or feces.

This is his way of letting people know that this is his car seat and that he is marking it as his territory.

He Is Feeling Excited In The Car

Dogs’ heartbeat increases when they are excited. This may cause them to produce more stool.

And because a car is a place where there is a lot of excitement for your dog, it is inevitable that he will poop out of intense excitement.

The smell of the car, the “moving” scenery that he sees through the car’s windows as the car is moving and the sound that he hears certainly thrills him.

You will see your dog’s open mouth grin, with his tongue hanging out, and feeling restless in the car.

In addition to panting, he may also keep jumping up or barking continuously during the ride.

Tips to Prevent Your Dog from Pooping in Your Car

1. While riding in the car, make sure to give him some chewing toys and treats to keep him occupied so that he will not focus on his fear or anxiety.

2. You should avoid abrupt lane changes or sudden stops when driving to avoid inciting your dog’s nervousness or panic.

3. Avoid giving your dog any milk or dairy products if you are taking him for a car ride as these foods can easily upset his stomach, resulting in an accident.

4. If you plan to ride during peak times (when there will be heavy traffic on the road), keep the ride short (less than 30 minutes) as your dog will require more potty breaks because of increased anxiety levels.

5. The use of a portable crate can greatly reduce your dog’s anxious responses and make him feel at ease. This is because he will see the crate as his den and will feel safe when he is in it (assuming he is already crate trained).