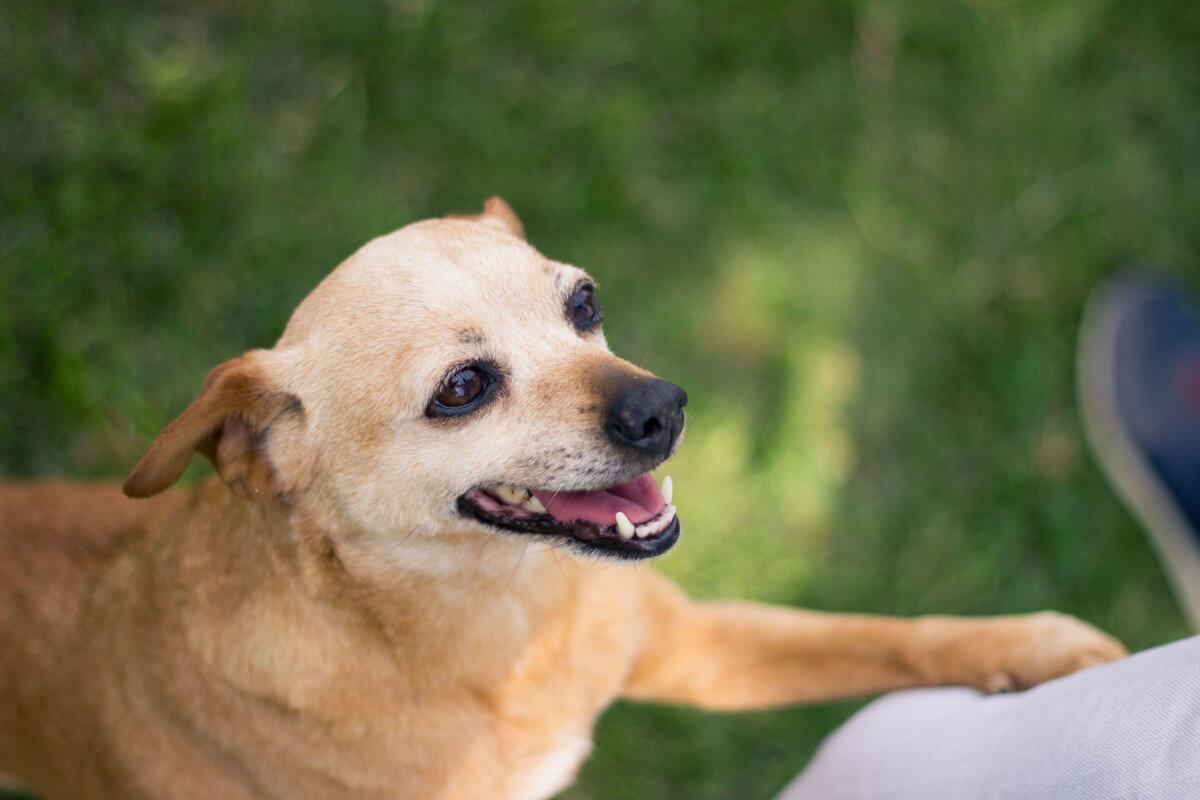 It’s common for dogs to mouth or lunge at each other when they’re playing. This is how they communicate. Therefore, it is normal for your Chihuahua to bite your face while playing to express his affection.

Is that the only reason for your dog’s behavior? Or is there more to it? Let’s find out in this post.

He Is Testing the Boundaries

It is common for dogs to lunge and mouth when they are playing and testing their boundaries.

Through play, dogs are taught how to behave in a variety of situations. This holds true for dogs of all ages, from puppies to adults.

Puppies, however, exhibit this behavior even more prominently. As puppies learn to explore their environment, they often lunge and mouth.

Therefore, it is common for puppies to lunge and mouth on anyone or anything that they are able to get a hold of when they get the chance.

If your Chihuahua is still a young puppy (less than 12 months old), do not be surprised by his act of biting your face as he is still trying to test his boundaries, and he has no idea that you will not allow him to bite you.

As he grew up, he should have learned his boundaries and know how to behave himself and would not bite you unless he was being playful or in need of your attention.

He Is Getting You to Play with Him

A dog that lunges at your face is trying to play with you, and he wants you to play back with him by responding to him.

His intention is just to get you to play with him, and he doesn’t mean to hurt you in any way.

There may be a need for you to consider training him to stop lunging at your face if that is causing you discomfort by the way he behaves.

As soon as he starts biting your face, you should start standing up and walk away from him as soon as possible. If you do this, you are sending a strong signal to him that you are not pleased with what he has done.

You should also plan for sufficient exercise daily to keep his energy in check so that he will not feel restless.

Typically, it is recommended that Chihuahuas get 20 to 30 minutes of exercise each day. Keep an eye on your Chihuahua, particularly when he’s young, so he doesn’t become overtired.

Taking your Chihuahua for a walk in the park is a great way to keep those little legs fit and healthy and help him to release the pent-up energy in his body.

He Was Overstimulated by Your Excitement

Your response (over excitement) to your Chihuahua mouthing can easily overstimulate him to behave wildly. This is especially so for high energy dogs such as Chihuahuas.

And that causes him to react to your over-excitement by biting you. You will need to let your dog feel your calm energy and use the “sit” command to make him sit down so that he doesn’t mouth you whenever he senses your excitement.

The “sit” command is a great way to teach your dog to behave himself. It makes him stop doing whatever he is doing, and follow your instructions.

When he does follow the command, praise him, and reward him with a treat. It is important to use positive reinforcement when teaching your dog to behave himself when he is overstimulated.

The important point to keep in mind is that your state of emotion can greatly affect how your Chihuahua is behaving. You must learn to control your emotions in order to keep your dog under control.

You Have Encouraged This Behavior

Your response to your Chihuahua’s behavior can make all the difference. Avoid giving him the impression that you love him performing this biting act if you want to reduce the frequency of this behavior.

If you have been giving your Chihuahua attention whenever he bites you, he may begin to perceive that you are rewarding him with your affection for biting you.

As you probably know, dogs like to please their owners and that will make your dog keep performing this act.

What you should do is to step back and let him know you’re going to ignore him and not going to play with him anymore whenever he starts to bite on you.

This will help your dog to understand that this biting behavior is unacceptable.

As soon as your dog stops lunging or mouthing, reward him with a treat, praise, or pet. This positive reinforcement training approach will help your dog realize that by not biting at your face, good things will happen.

Keeping your eyes away from him and walking away is the key to stopping your dog from biting your face. It won’t take him long to realize that what he’s doing is annoying once you ignore him and walk away.

You Have Food On Your Face That Your Dog Craves

Are there any food particles left on your face and mouth that your dog is attracted to?

The scent of these foods will arouse your Chihuahua’s curiosity, and he will attempt to lick and bite your mouth and face to try and get the food.

It is especially true if he is hungry or if the scent of the food appeals to him.

So, it is important to rinse your mouth after eating and keep it clean to prevent your dog from providing his “cleaning” service for you!

Dogs are pack animals. As such, dogs have an instinctual need to maintain their position as the alpha dog. This is especially true of aggressive dog breeds such as Chihuahua.

When you see your dog lunging, biting, growling, or mouthing, it may be because he is attempting to establish dominance in his pack.

This behavior can be caused by the dog’s natural instinct to protect his territory, or because he has been bullied by other dogs or people.

If your Chihuahua is mouthing you, it could be because he’s trying to establish dominance over you and be the alpha in his pack.

This can be the case if he has been previously abused or mistreated and is trying to establish dominance.

Typical signs of dominance in dogs include :

It is possible that your Chihuahua is exhibiting dominance-related behavior if he is showing the above signs.

He Is in His Teething Phase

It is normal for puppies to be playful and to want to get their teeth into something else. This is especially true when he is in his teething stage.

He will start to chew on things such as blankets, toys, shoes, or anything that is within his reach.

And guess what will happen if he gets close to your face? He will start to bite on your face.

To prevent him from biting on your face, make sure you keep his teeth away from your face when you are playing with him.

If your dog is lunging and mouthing when in play, you can try distracting him with toys or treats.

A puppy’s teething might be intense at first, but it usually ends at six months when the adult teeth begin to emerge.

He Is Trying to Get Your Attention

The first step to stopping your dog from lunging and mouthing is to understand why he’s doing it.

Is it because he’s bored? Does he feel left out? Is he trying to play? If you don’t know why your dog is lunging and mouthing, it will be difficult to stop him from doing so.

As soon as you know why your dog is behaving in this manner, you can then take steps to prevent it from happening again.

You should consider using positive reinforcement training methods to help your dog learn that by not biting you, he’ll receive a reward (usually praise).

If you have been neglecting your Chihuahua, it is quite possible that he is feeling lonely, and he is trying to get your attention by mouthing you.

He is just trying to make sure that you know his presence.

He Is Getting Aggressive

Dogs have a variety of behaviors that range from playful to aggressive. When a dog lunges and bites, it’s often because he’s playing.

However, biting can also be part of an aggressive dog’s behavior, which is often accompanied by signs such as growling and stern stares.

While aggression can be a natural way for dogs to communicate, it is certainly considered an unwelcome or problematic action.

This is especially so if you are playing with your dog and suddenly his behavior turns aggressive during a play and starts to bite your face.

In this situation, you should calmly give your dog the “stop” command and gently push him away from you.

Don’t yell at your dog as this act will only make him more aggressive and more likely to lunge and mouth again.

You should also try to understand what your dog is trying to communicate.

If you can figure out why he’s lunging and mouthing at you, you can address that trigger and train him to behave calmly and respectfully when he is with you.

Separation anxiety is a common occurrence in dogs. Dogs who suffer from it are anxious when they are left alone.

This is especially true for dogs that have been previously abandoned by their owners. They are afraid of being left alone and will bite at their owner as a way to express their fear and frustration when they sense that they will be left alone again.

If you have just adopted a Chihuahua that is experiencing separation anxiety, he will bite you in the face whenever you attempt to get up and walk away from him as he is anxious about being left alone.

He may even follow you around the house if you attempt to leave the room as he is trying to make sure that you are not abandoning him.

It is important that you give your Chihuahua plenty of attention, so that he can learn to trust you as his pack leader, the one that will take good care of him and will not abandon him.

Whenever he remains calm and relaxed when you are out of his sight, give him rewards for his calm behavior. This will make him associate calmness with being rewarded.