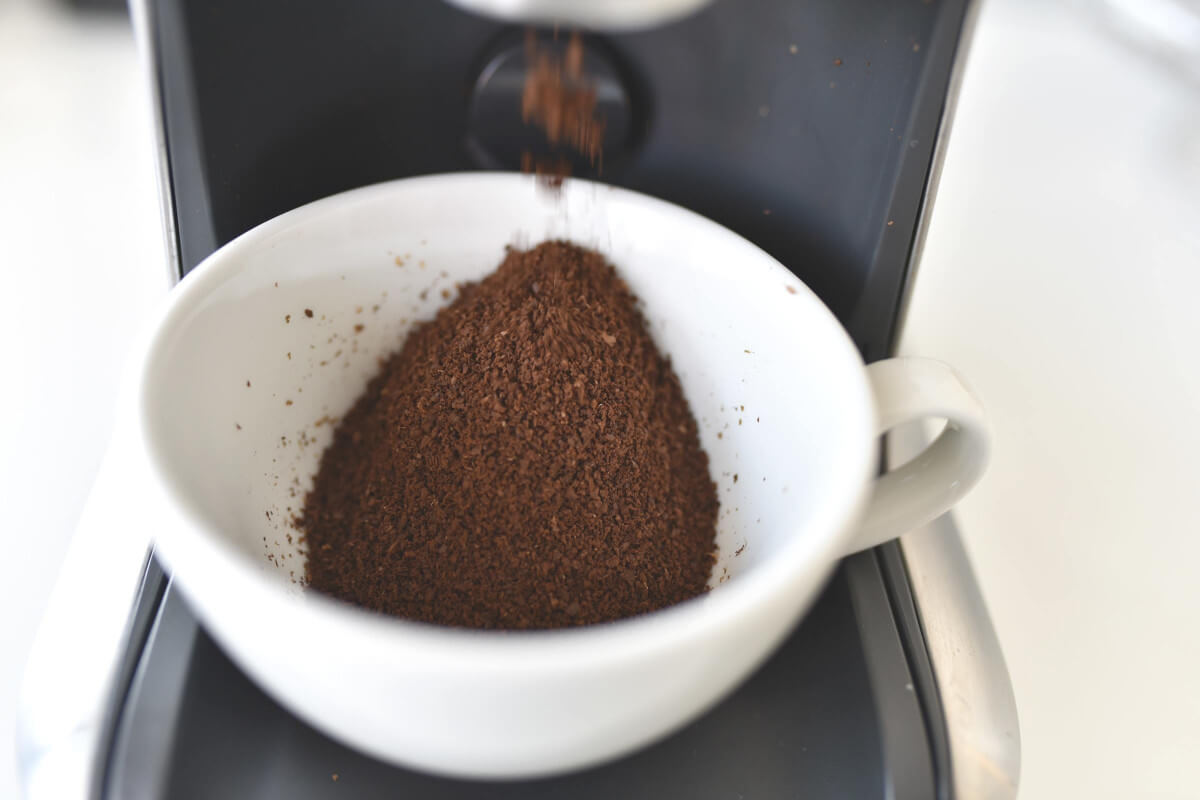 If your dog had eaten the coffee grounds that you had thrown in the trash bin, this is certainly something that you need to be concerned about.

You will have to check for any signs of sickness or complications that may arise due to him eating the coffee grounds.

This is because the caffeine found in coffee grounds remains after they’ve been soaked with water and filtered, but in a less concentrated form compared to before they were brewed.

Dogs are much more sensitive to caffeine than humans, and while a reasonable amount of caffeine (less than 400 milligrams of caffeine daily) will cause no ill effects on a healthy adult, for dogs, even a small amount can cause a wide range of health problems, including vomiting, diarrhea, tremors, seizures, coma, and even death.

In fact, dogs can die from eating just 0.4 oz of coffee beans! If your dog has ingested any caffeine – containing substances, such as coffee, tea or chocolate, he should be seen by a veterinarian immediately.

Why Is Caffeine Toxic for Dogs?

Caffeine is toxic for dogs because it increases their blood pressure and can cause them to suffer from cardiac arrhythmias.

Tremors or seizures may also occur along with loss of muscle control. In addition to that, vomiting and diarrhea are possible side effects of caffeine when it comes to the gastrointestinal tract.

Is There a Limit to How Much Caffeine a Dog Can Consume Without Harm?

Depending on the size of the dog, the amount of caffeine present in coffee beans that is required to cause harm to the dog is listed below :

The toxic level of coffee beans for dogs is as follows :

Of course, this is assuming that your dog is ingesting coffee beans. It will be a different story if your dog drinks your coffee.

Approximately 150 mg of caffeine per kilogram is lethal to dogs. A cup of coffee contains only about 100 mg of caffeine, so your dog is unlikely to drink enough coffee to pose a health risk.

This will also have to depend on the intensity of the coffee drink and the size of your dog as well.

The toxic level of coffee drink for dogs is as follows :

What Is the Lifespan of Caffeine in a Dog?

It has been found that it will take approximately 12 hours or more for the caffeine to leave the dog’s body once it is ingested.

The stimulant effects of caffeine on various body systems are generally responsible for caffeine toxicity in dogs.

After consuming caffeine-related beverages such as coffee or tea, the following toxic symptoms will usually appear within 1-2 hours.

In severe cases, this can lead to fatality.

What Should You Do If Your Dog Eats Caffeine-Containing Food?

Dogs that eat coffee grounds should be taken to a veterinarian as soon as possible. This is a situation that requires immediate attention from your veterinarian.

In high doses of caffeine, there are many toxic side effects that can occur as a result. Getting advice at the earliest possible time will have a positive impact on the outcome of your dog’s situation.

It may be possible for your veterinarian to induce vomiting to prevent your dog from further absorbing caffeine into his body.

To flush caffeine from your dog’s body, your veterinarian may administer intravenous fluids if vomiting cannot be initiated in time.

In most cases, pets will survive as long as they are treated timely.

Make sure your dog cannot reach any coffee grounds to avoid accidents from happening. The best way to prevent your dog from getting into your household waste is to invest in secure garbage or compost bins.

Can Caffeine Cause Dogs to Be Restless?

Caffeine, which is a form of stimulant, can also affect your dog’s central nervous system, and causes him excessive anxiety.

It has been reported that caffeine is linked to dog’s aggressive and hyperactivity behavior.

What Foods and Beverages Contain Caffeine?

Caffeine is found naturally in many plants, such as coffee beans, tea leaves, kola nuts, and guarana.

Caffeine is also found in a wide variety of foods and beverages such as coffee, tea, chocolate, soda, energy drinks and some medicines, including caffeine-containing drugs such as xylazine and ketamine.