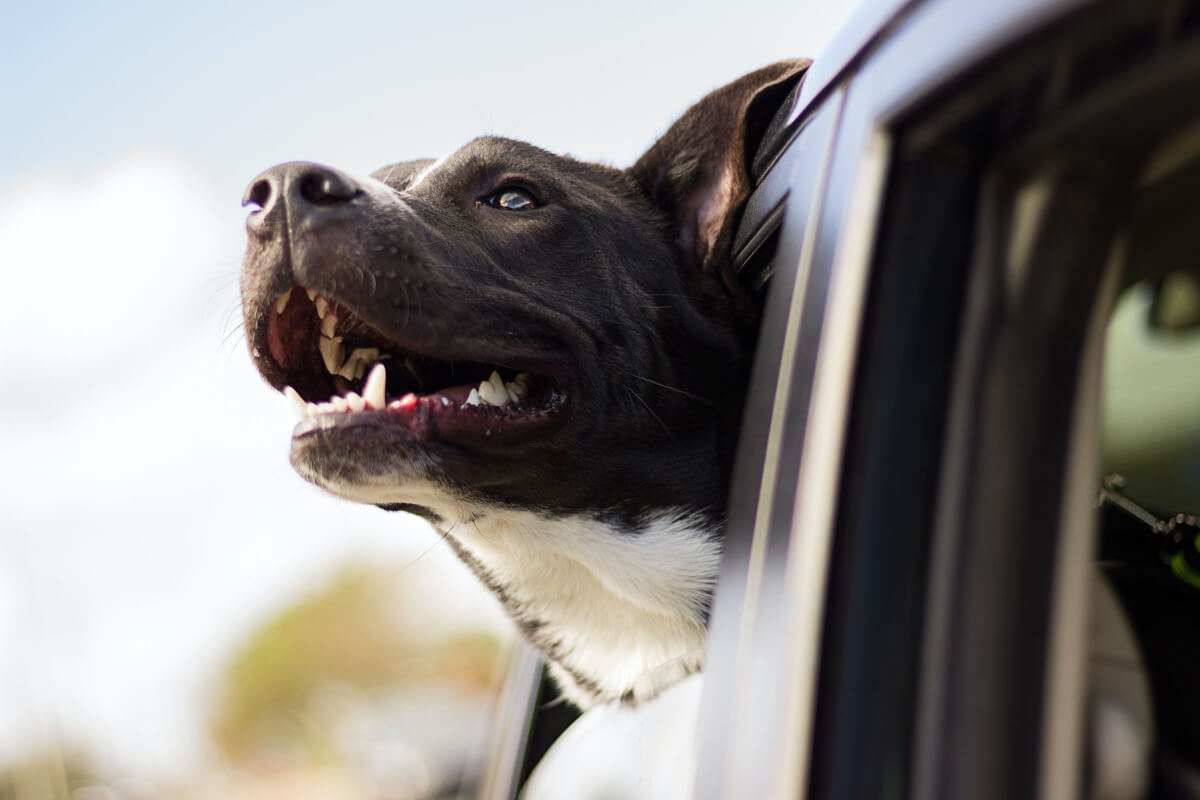 If your dog is getting over excited in the car and won’t stop creating havoc (barking, howling and jumping from one seat to another), this post will be for YOU!

I will share with you some valuable tips that are going to help your dog overcome his car’s excitement.

To calm down an excited dog in the car, get him to release his pent-up energy before the trip, prepare something super distracting in the car to grab his attention, make the car seat cozy for him, play classical music in the car and to associate the ride without any payoff.

Why Is Your Dog Getting Excited In The Car?

First thing first, I would like you to get some understanding on the psychology of why your dog is behaving in this manner as I think this will greatly help you in training your dog to do away with his car’s excitement.

You see, dogs have an emotional response to something that he is fancy on. Just like if you ring a bell and associate that sound with your dog’s food in his bowl, this will make him know that when he hears the ring, there will be food for him.

So the next time when you ring the bell (without any food in the bowl), your dog will also likely salivate as he is expecting the food to be in his bowl.

This psychology is going to happen to your dog as well when you take him out for a car ride.

He is going to associate that car ride with his BEST walk as there is always going to be something incredibly exciting waiting for him (the moment he steps out of the house and right up to the car ride) and that simply going to drive his excitement to a new height.

He starts to associate car rides with something incredibly exciting waiting for him!

If you think back on the FIRST occasion when you brought him out for a car ride, what is his experience back then and does that ring your bell why he is so excited when you bring him for the subsequent rides?

How To Calm Your Dog For A Car Ride?

To work on correcting his excitement behavior pertaining to car rides, I would like to illustrate it through the concept of the “Ladder Of Excitement”.

Think about how a person who has a phobia of heights reacts as he climbs up a ladder.

Unless he overcomes his anxiety as he progresses through each ladder step, it would be hard for him to manage his fear when he reaches the top of the ladder. He will be at his greatest level of fear.

This principle applies to your dog’s excitement in his car ride as well. Each activity that your dog goes through (such as walking out of the front door, jumping into the car seat, looking out from the car’s windows, experiencing new sights and scent) denotes a step in the ladder.

If he is not able to suppress his excitement and allow it to consolidate and escalate till it reaches the top of the ladder (his threshold), it will lead to a burst of uncontrollable excitement!

So without further ado, let’s dive into these small ladder steps (tasks that you would do to bring your dog out for a car ride) and work on how you can help your dog to eliminate or reduce his excitement at each of the ladder steps.

Activity: Put your dog on the leash to get him ready for his outdoor activity – car ride.

Reduce His Excitement: This can be done by training your dog to know that putting him on a leash doesn’t always mean that he will be out for any outdoor activity.

Activity: Opening of the front door to the outside world.

Reduce His Excitement: This is all about obedience. Start by making him perform a sit when you open the front door and only give him the release clue to pass through the door when he remains calm and stays in the sit position.

Remember to keep calm as you would want your dog to share your calm energy and get him to maintain his eye contact with you.

You see, the outside world is always full of excitement for any dog as it is filled with different sights, smells and things.

You have to make sure that your dog isn’t going to get very excited and dash out of the door the moment it is opened. This is to prevent him from accumulating all this “excitement” energy and hitting his threshold (top of the ladder).

Remember, the goal is to make him get out of the front door calmly!

If your dog is still exhibiting excitement, keep repeating this step and apply obedience commands on him till he willingly offers you his eye contact and is on a loose leash, then you let him out.

Activity: Opening of the car door.

Reduce His Excitement: This is similar step #2 and it’s all about obedience. You need your dog to be waiting patiently and remain calm at the car door. Wait till he offers you his eye contact before you open the car door slowly.

Make full use of obedience commands to keep the energy level of your dog down so that he will be in a calm state when he is in the car.

Activity: Turning on the car engine.

Reduce His Excitement: After you turn on the ignition, do not set off immediately. Listen to music in the car for about 5 minutes before moving off.

This is to let your dog know when the ignition is on, nothing is going to happen immediately and there is no reason for him to be excited when he gets into the car. And as he is waiting, make him lay down and this will further reinforce his calmness.

Activity: Car on the MOVE!

Reduce His Excitement: This is the most tricky step to fix as that is the BEST walk he had ever wanted! What you can do is to try to change that outcome, that is, to make that “WALK” not to be as interesting as what your dog had expected.

Plan for some journey that simply goes nowhere (that is, just a tour around the quiet neighborhood and keep the ride session short – about 15 minutes).

Carry out these “going nowhere” rides about 3 times in a week and gradually your dog will learn that going into the car for a ride doesn’t always result in his best walk and will turn out to be a rather boring event for him.

Now that you understand why your dog is getting so excited and you also get to know how to desensitize all these little steps on your ladder, I will further share with you some PROVEN games changing tips.

An energetic dog will easily get excited by any stimuli and to make your dog calm down, you would need to find an outlet for him to release that pent-up energy in his body.

As the saying goes “A tired dog is a GOOD dog”. Making your dog tired certainly comes with a lot of benefits and one of it will be getting his calmness.

What I have done for my hyperactive dog is as followed:

1. I have planned for some physical games such as Chasing Bubble, Frisbee and Flirt Pole to help him get off that burst of energy in his body.

2. Bring him out for a stroll in a neighborhood. This will not merely help him to release his pent-up energy but also makes him mentally tired as he would be using his brain power to exercise impulse control of things that catch his attention along the way.

3. I will also prepare a KONG stuffed with peanut butter and give it to him to play with. This will make him utilize his brain power, thinking of ways to get the treat out from the KONG.

Give Your Dog Something Super Distracting In The Car

What you can do is to give your dog something (maybe his favorite food dispensing toy) that you know that he will not be able to resist and will focus his attention and energy on.

This will help him to divert his excitement to his food toy and get him to forget that he is in the car!

Make The Car A Cozy Place For Him

Prepare a small dog bed or blanket for him to rest on comfortably when he is in the car. Having a space where he would want to rest will certainly help to calm him down.

You are in NO rush for the car ride so make sure that your calmness is reflected in your body language and tone. Your dog will closely monitor your emotion to decide on his reaction.

Taking a 10 seconds delay in every “ladder step” event that you are doing is going to help you calm your dog down.

For example, when opening the front door, don’t let your dog burst straight out from the door. Just wait for 10 seconds for him to calm down before you let him make the move.

The same goes for the opening of a car door. Apply the 10 seconds delay approach before allowing your dog to jump to the car seat. The goal is to always make your dog calm down before proceeding with any action.

Play Music In The Car To Calm Him Down

Music helps to make a dog calm down. Instead of listening to your favorite radio program, play some classical music in the car to bring down your dog’s excitement level.

Use Of Essential Oil (With Diffuser) In The Car

Essential oils have been proven to help ease stress, anxiety and excitement. You can apply 1 drop of lavender oil to the portable diffuser (keep the concentration level LOW) and let the scent cover the car compartment.

When your dog inhales the scent, this will help to calm him down.

The reason why your dog is super excited in the car ride is because he knows that there is always a payoff (he gets to have the BEST walk which allows him to see people, animals, new sights and smell).

What you need to do is to let him know that there is NO payoff for his car trips and there is no reason for him to be excited.

This can be done by adopting the following approaches:

1. Your dog would not leave the car during the ride.

2. The car’s windows are closed up.

3. Consider going for window tinting film on your car’s windows to “block” his view from the car.

4. Put him in a portable dog crate to “restrict” his view and movement.

So now you get to know more about the “ladder of excitement” concept, it’s time to put them to use.

Plan for YOUR ladder and come up with a plan to make all these little steps less exciting for your dog so that he will not ever reach that excitement threshold and act inappropriately, such as drooling in the car during the ride.

It would be a wise move for you to start socialization training for your dog if you have not already done so.

During socialization, your dog should be exposed to as many sights, sounds, and smells as possible in a positive way.

A well-socialized dog won’t be fearful or excited on a car ride, and will grow up to be a calm, well-mannered companion.