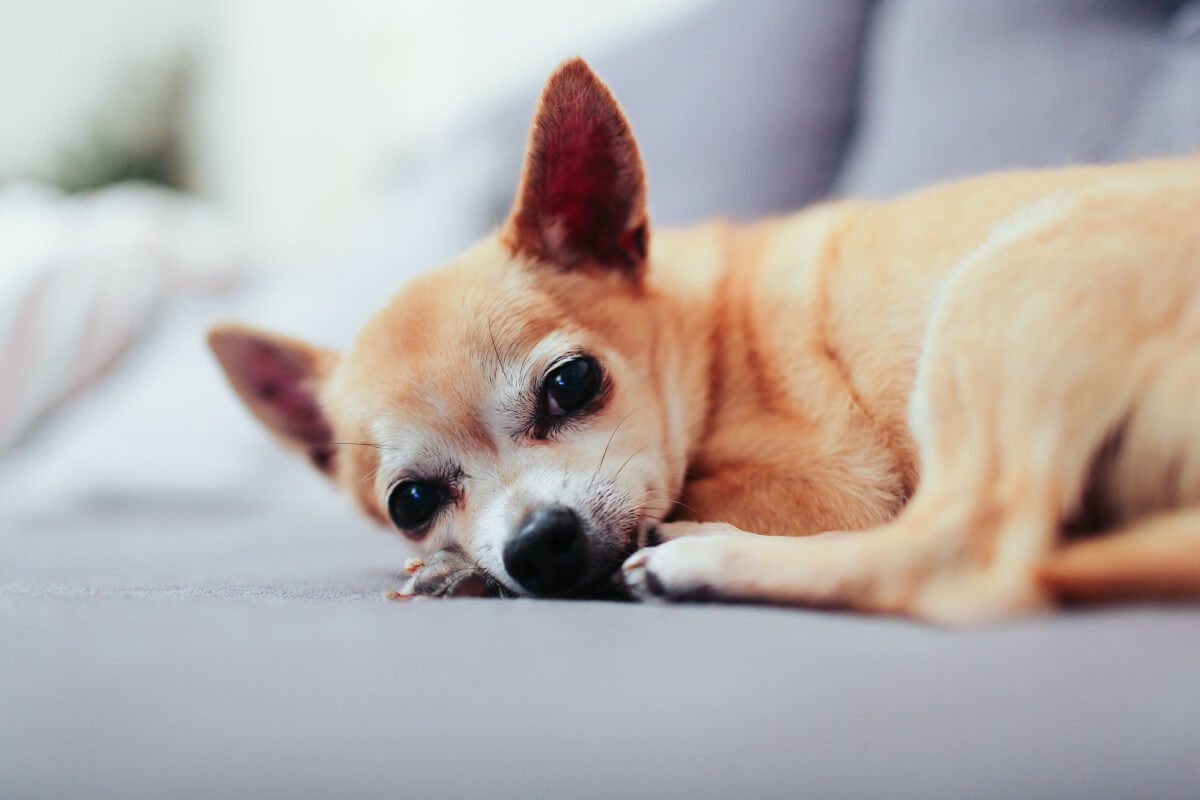 While most dog breeds can live comfortably with 12 to 14 hours of sleep every day, Chihuahuas typically rest for 14 to 18 hours a day.

Puppyhood is the most active time of their lives, and they compensate for all that energetic playtime by sleeping a lot!

That is why Chihuahua puppies have been observed to sleep for as long as 20 hours.

It is also common for Chihuahuas to sleep more when they are older, and they typically sleep 16 to 18 hours each day.

At what age does a Chihuahua become a senior dog?

Since Chihuahuas are part of the toy breed group (which generally has a longer life expectancy than large breeds), you can expect them to have a longevity of up to 14 to 18 years.

Therefore, they are considered to be senior dogs only when they are about 10 years old, averaging between 9 and 12 years.

Having a Chihuahua that sleeps a lot may make you wonder why he is always feeling so tired? He spends most of his time on the couch and is not as “active” as you would like him to be.

Well, there are several reasons as to why your Chihuahua looks so exhausted.

Do your kids sleep well at night if they are hyperactive during the day? That explains why your Chihuahua is generally going to sleep most of his time (up to 14 hours) after engaging in vigorous play.

Chihuahuas are known for being very active, energetic, and playful, especially when they are puppies.

Because of the vigor packed within their bodies, they are going to be hyperactive and have a lot of energy throughout the day.

They will be so engrossed in the game that they will completely exhaust themselves and need to have a “refueling” session (resting) after the workout.

It is for this reason that young Chihuahuas tend to sleep even longer (up to 18 hours) after playing hard.

Age Plays a Role in How Long He Sleeps

The sleeping habits of a dog can be influenced by his age.

Like I said, Chihuahua puppies are more active than most puppies of other breeds, so they need to sleep for 16 to 18 hours a day to regain their energy.

On average, young Chihuahuas typically sleep for about 16 hours a day, whereas older dogs tend to stay asleep for a longer period of time.

It is not uncommon for your older Chihuahua to sleep as much as 18 hours a day as they age.

Age-related changes can prevent your older dog from being active. As he ages, his tendons and ligaments lose elasticity, which stiffens his joints and that makes him less nimble, and he prefers to sleep longer.

The deterioration of his hearing also makes him sleep longer and deeper and since he couldn’t hear your call, he continued sleeping oblivious to your presence.

Basically, if your senior Chihuahua seems to sleep more than usual, it’s totally fine. It’s part of the aging process.

He Is Sleeping to Pass the Time

Chihuahuas love socializing and are always looking for something to do. Their brains require some kind of stimulation to keep them focused.

Therefore, it should not come as a surprise that your Chihuahua sleeps more than usual if he is not given enough stimulation.

He may sleep more and burrow in his blanket just to kill time when you are not around, and there is nothing to keep him occupied. This is especially so if he is “trapped” in a crate with no toys to keep him entertained.

As soon as he sees you coming back home, he will start barking, growling, and biting on the crate just to get your attention to let him out.

There Is a Possibility That Your Chihuahua Is Sick

Just like you are likely to rest more if your body is unwell, the same goes for your little pet as well.

Even though Chihuahuas spend a considerable amount of time sleeping, irregular sleeping patterns could mean that they are suffering from some health issues such as arthritis, malignancy, or metabolic syndrome.

You need to be on the lookout for any signs of lethargy or weakness in your dog, as this can result in acclimating to unusual sleeping habits.

Illnesses that can make your dog abnormally fatigued and weak include parvovirus, distemper, kennel cough, heartworm diseases and leptospirosis.

Metabolic diseases, such as heart and liver problems, diabetes, and hypoglycaemia can also cause fatigue.

If your pet has been lethargic for more than 3 days, it might be necessary to take him to the vet for an examination.

A quick health checkup with your vet will be able to help you figure out if your Chihuahua is sick or just needs some rest.

Side Effect Of Medication

When Chihuahuas are on their medication, they tend to sleep more than usual. Therefore, if your pet is currently taking medication, you should find out whether that is contributing to his sleepiness.

A medication such as trazodone (an antidepressant) used to treat dog’s behavioral problems can cause symptoms such as fatigue, shakiness, nausea or diarrhea, rapid heartbeat, shortness of breath, and hyperactivity when taken in excess.

Usually, veterinarians will tell you about any possible side effects, so this is a rare occurrence.

If you’re not sure about the medication your dog is eating, you should always check with your vet.