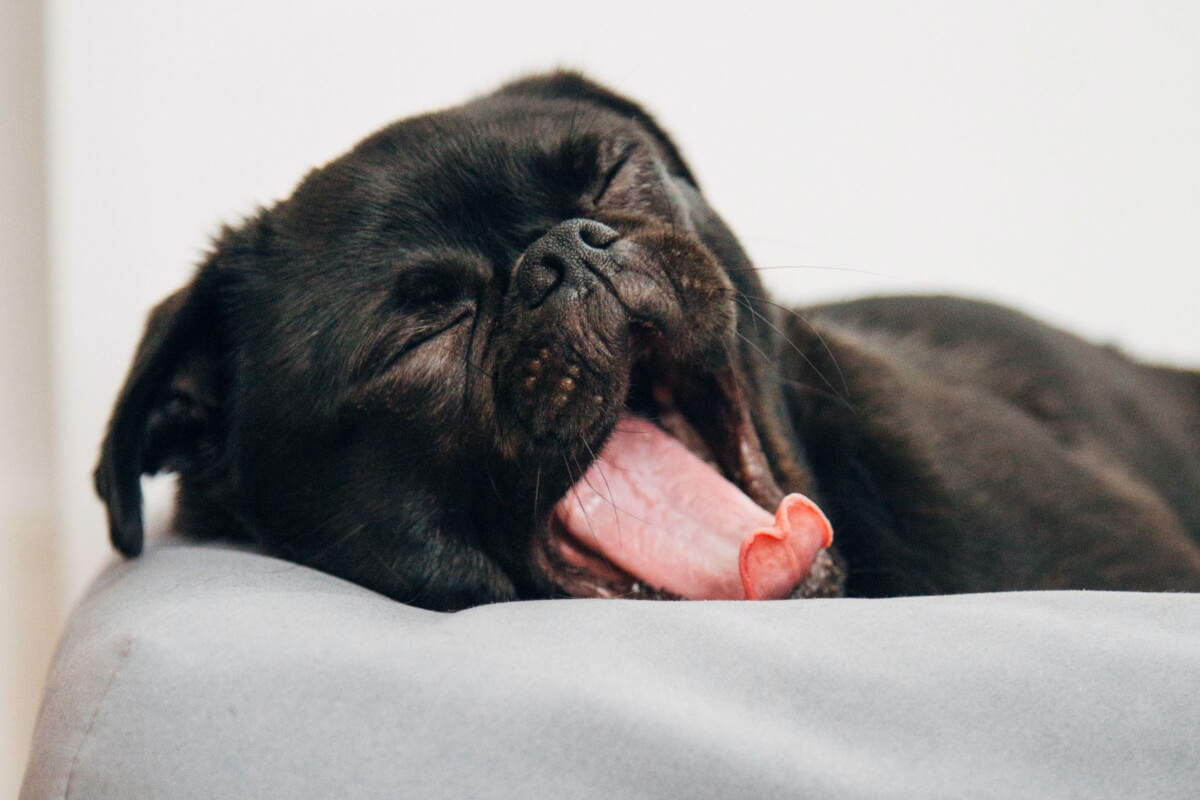 It’s an exciting moment for you! You have just brought back a new puppy, and he is a REALLY cute, lively and energetic pup. What comes next in your mind is how are you going to get him to sleep at night?

This is often a common question that all new owners will ask when they adopt their very first puppy to their family.

I will share with you what are the preparations and actions that you need to do to make your puppy’s night sleep to be much smoother and less stressful for YOU!

There is undoubtedly going to be some crying and barking on the first few night days as your puppy is still adapting to his new environment. This is part of his learning phase. You would just have to try making him feel at ease and that he is not alone.

To get a new puppy to sleep at night, you would need to make him tired (through physical exercise and mental simulation) and get a cozy sleeping area (a crate) for him. Place the crate in an area where he can easily see you and make sure that he has done his potty right before his sleep.

Play and exercise with him as much as you can. Get him engaged in physical and mental exercises and games to make him let off as much energy as possible.

This is extremely important as you would want to make your puppy release ALL his excessive energy before the night comes.

As the saying goes “A tired puppy is a GOOD puppy”. Making sure that your puppy is physically and mentally tired will certainly help him to get into a good sleep without much anxiety.

Having said that, be careful not to over exhausted your puppy as that may make him go to sleep more frequently to recuperate his body.

This is what I have planned for my puppy on his workout:

1. Physical Games  : I will play with him some physical exercise such as tug of war, Frisbee, flirt pole and chasing bubble games in the late morning for about 30 minutes.

2. Mental Simulation: In the late afternoon, I will plan some mental simulation games for him so that he could work on his brain power to get him mentally tired.

I would either give him a Kong toy stuffed with peanut butter for him to think of a way to get the treat out from the toy or play hide-and-seek with him. I would also keep this playtime to about 30 minutes.

3. Night Stroll: To help my puppy release any residue energy left in his body, I will bring him out for a night stroll after dinner before his night sleep.

4. Optional: If you find that your puppy is still rather active after the night walk, give him some chewing toys to play with about 30 minutes before his sleep just to let him burn off that leftover energy.

Feed Him At Least 3 Hours Before Bedtime

You would also want to feed your puppy 3 hours before his bedtime. This will give him sufficient time to fully digest the food and do his potty before he sleeps.

Make sure that you let him do his potty as often as he needs during the evening walk to clear his bladder and get himself ready for the night sleep.

Young puppy has a small bladder and would not be able to hold his potty for long. Thus, you ought to refrain from giving him any more water after the dinner to prevent him from having to go potty frequently in the night and affecting his sleep.

A final potty break before he goes into the crate for his night’s sleep should be arranged.

Introduce Crate To Your Puppy

Dogs are den animals by nature, and they love to have their own little den to go in and sleep in at night. So introduce the crate to your puppy right away on the first day when he is with you.

The goal is to make him associate the crate as a great place to stay in so that when you put him in the crate during the night, he gets that sense of security and would be able to sleep peacefully.

Crate offers lots of benefit such as:

1. A personal and secure space for him to rest and sleep.

2. A place where you can keep him when you are not available to supervise him.

3. A safe place where he can hide when he feels a sense of threat (such as when you have visitors coming over, there are thunderstorms or fireworks that make him nervous).

To make your puppy like and love to be in the crate, you would need to associate the crate with positive experience. That is, when he is in the crate, GOOD things will happen.

This is how I do it:

1. I would feed my puppy in the crate. This will help him to associate being in the crate with rewarding experience (He would get his food).

2. Play with him in the crate. I will leave some chewing toys in the crate and let him go in and out of the crate at his own will. The idea is to make him feel that the crate is more like his den, a personal place where he gets his food and play, and he is free to come and go at his own wishes.

Make sure that you start introducing the crate to your puppy as early as possible (preferably during the day) as you would want him to get used to his new sleeping premise.

Do not simply put your puppy in the crate during the night without first getting him used to this new home of his. This will make him feel nervous and anxious and start his barking in the crate. It’s simply not possible for him to sleep in this mental state.

Of course, make sure that the crate that you have prepared for your new puppy is cozy. It had to be spacious enough for him to stand up, turn around and sit down comfortably.

Keep a blanket in the crate to keep your puppy warm in the night along with some chewing toys that he can play with when he feels lonely.

Your new puppy is away from his pack members and siblings and is now alone in an unfamiliar environment – your home. It’s inevitable that he is going to feel very lonely and anxious in particular during the night.

You would need to think of ways to ease his anxiety and make him feel that you are with him.

This is WHAT I do for my new puppy:

1. I will get my puppy a portable wire crate. I prefer the wire crate as it offers an “open” view design where my puppy can easily see me right from his crate without blocking his sight.

2. Place the crate in my bedroom so that he can easily see me during the night. My presence certainly offers him much comfort and helps to make him feel that he is part of the family and is not alone.

3. Play some classical music in the background to help him calm down. Puppy often gets tense up when he finds the background gets silent out of the sudden and music will help to fill up the silence and ease his anxiety.

4. Place some of my old clothing that comes with my scent in the crate. This will make him feel that I’m just beside him and will help to calm him down.

5. If you do not like the idea of using your clothing, you can make use of essential oils such as lavender to calm down your puppy. Do not apply undiluted lavender oil to your puppy directly.

I would suggest that you apply 2 -3 drops of the oil to your puppy’s blanket in the crate. Lavender oil helps your puppy to relieve his stress and anxiety during the night when he is alone in the crate.

Do Not Reward Whining Or Barking

It takes time for your new puppy to be fully comfortable sleeping in the crate and your puppy is likely going to bark or whine during the night while he is still adapting.

DO NOT ever give your attention to your puppy right away whenever he cries or barks in the crate.

Wait till there is a little break in his barking or whining before you give him his attention and address his needs (maybe he needs to go potty, he is hungry).

If you go over to him right away when he is still whining, he will be thinking that you are rewarding his whining by going over to him, and he will keep performing this action during the night and getting him to sleep would be a challenge.

You would likely need to plan for a 3–4 hours interval potty break for your young puppy during the night while he is in the crate as his bladder is still not fully developed. This will help to address his potty needs before he starts barking for your attention.

Your Puppy Needs A Sleeping Routine

Routine is the key to help your puppy get into sleep at night. Generally, a puppy would need about 15 to 18 hours of sleep daily. By planning his sleeping routine wisely, you can ensure that he is not “oversleep” during the day and is ready for his night sleep.

For my puppy, I would plan for a nap for him in the morning (after his physical games) and another nap in the afternoon (after his mental simulation).

To prevent him from staying awake in the night, I will refrain him from taking any nap (at least 4 hours) before his bedtime.

This will avoid getting himself “recharged” with the evening nap and keeps him awake in the night, barking for your attention.