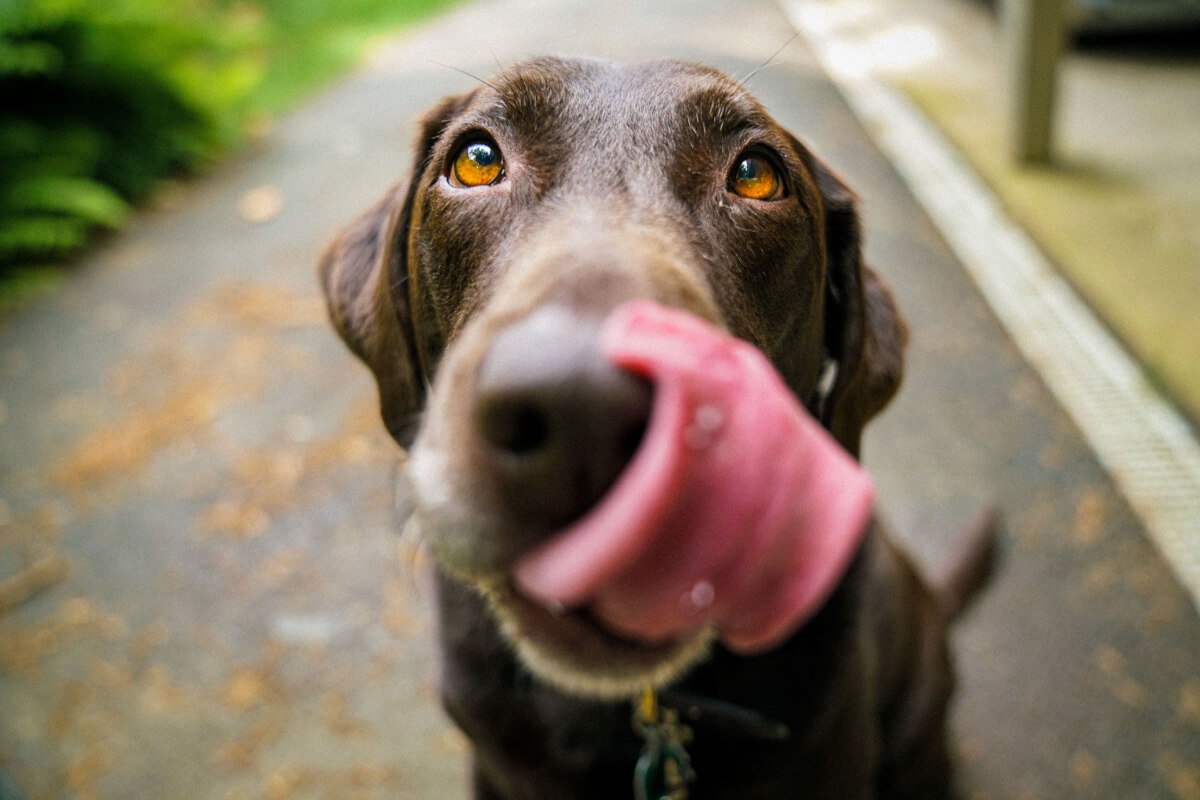 There is an old tale that when dogs keep licking their noses, he is sick. This is NOT really true in a way.

Dogs like to lick their noses for reasons such as to cool down, calm anxiety, ease stress, clean up noses and to keep their sense of smell “active”. They could also be doing that to ease their discomfort as the result of health issues such as allergies that trigger itchiness or infection in their noses.

Dogs certainly like the idea of keeping their nose wet by licking on his nose and here is why.

To Taste What’s On His Nose

You see, we primarily interpret the world using our eyes, but dogs learned about the world through their smell. This is why dogs’ sense of smell is 10,000 times much better than humans.

Since dogs rely a lot on his nose, their body will naturally release what is known as “mucus” to cover his nose. This mucus works by attracting scent particles that are floating in the air and keeps them “stay” on his nose a little longer for him to get a better sniff of them.

He would then lick his nose to get those particles right into his mouth where he could get to taste them along with his smell to make better analysis of the scent particles.

To Keep Himself Cool

Your dog can’t get off his heat through sweating as his sweat pores are all covered up by his furs. So the ways for him to cool down will be sweating through his paw pads, panting and wet nose.

The moisture from his tongue (through panting) and his wet nose will evaporate and provide some level of cooling for him, similar to the sweating effect.

To Keep His Nose Wet

You might also find that your dog’s nose may be getting dry at times. This is often nothing to be worried about as all dogs will experience dry and wet noses occasionally.

His nose will typically be dry when he is out for a stroll or playing in hot weather as he is trying to keep himself cool down. For older dogs or those who have allergies symptoms, dryer noses will be a common sign.

As a way to relieve his dryness, you would see that he starts licking his nose as a means to leave his saliva from his mouth on his nose, to keep it wet.

BUT if you find your dog keeps having a dry nose even when in a normal environment, it could be a sign of POOR health such as dehydration, windburn, chapped or cracked nose or a nerve problem.

His nerve isn’t telling the glands that are near to his nose to produce enough lubrication material to keep the nose wet.

You would need to seek help from a veterinarian to look into these health related issues and get the underlying causes.

To Ease His Anxiety Or Stress

Dogs will also do the licking of his nose when he is anxious or nervous.

You might have seen your dog start licking his nose whenever he senses that there is a storm coming. He is trying to calm himself down by doing this action.

You could also see this whenever your dog gets stressed. Do you observe your dog doing this licking when you reprimand him?

To Clean Up His Nose

Your dog may also do his licking simply to keep his nose clean.

You see, a dog heavily relies on his nose for almost all his activities, and it is inevitable that food, soil, grass, mud and all sorts of dirt will stick on his wet nose.

Since your dog can’t use tissue to clean up his nose, he would use his way to lick them off.

Or it could be the case that some foreign object gets stuck in his nose, and he is feeling uncomfortable.

For humans, we would probably start to “dig” our nose when feeling itchy or sticky, and dogs do it through the licking of their nose. They certainly can’t “dig” like we do 🙂

He will also lick his nose if there is something that irritates his nose such as the present of fleas or mites.

If your dog belongs to a brachycephalic breeds such as a bulldog or Boston terrier, he might be performing this licking more often as a way to get relief from the heat.

Dogs with compressed faces had a shorter nose and couldn’t effectively regulate their temperature. So beside excessive panting, they might regularly lick his nose as a way to cool down.

Due To Health Related Issue

Health issues such as fever, skin disorders, insect bites, nasal infections or injury (cuts or abrasion) to his nose area could also make your dog persistently licking his nose to get some relief.

You can do a visual inspection on his nose to check if there is any sign of skin redness, wounds or discharges.

Just like you may unknowingly pick up the bad habit of biting your finger when you get nervous, this could be a bad habit (persistent licking of his nose) that your dog may have picked up during his stay at the shelter.

If the licking is persistent, and you have verified with a vet that it’s not due to any health issue, and he is not doing it to cool himself or ease his allergies or anxiety, it could likely be just an undesirable habit that you would need to correct him.

So depending on the “frequency” of your dog’s licking behavior, whether it is every few minutes, or a few times daily or only on certain conditions, it could mean different reasons.

Of course, if he is doing that 24/7, you should bring him to see a vet immediately.

Say if he licks only after his meal, it could possibly be his way of cleaning up his nose after eating the food as the food gets caught on his nose.

Or when he is out for a walk and some particles trigger his allergies and cause his nose’s itchiness, and he is attempting to address that discomfort through his licking.

And if you have a dog that keeps licking the floor, you might be interested to read this article.