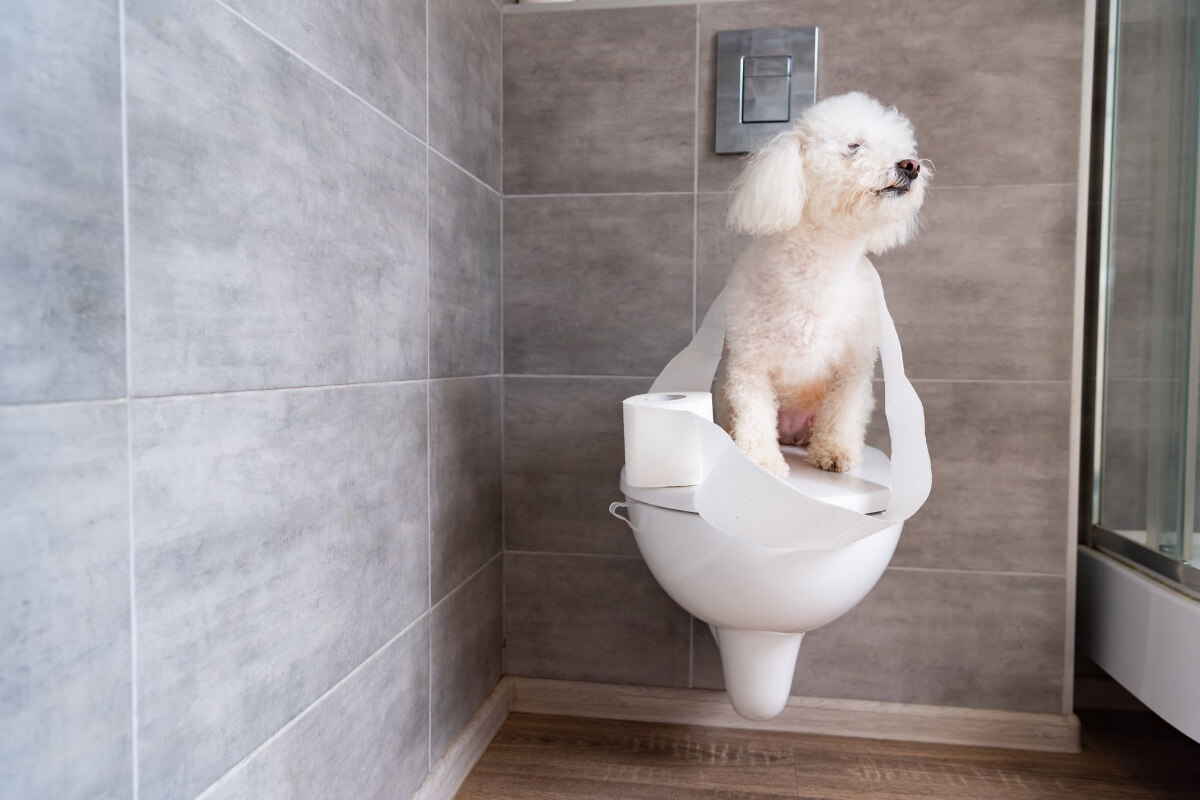 You may be wondering why a simple act such as going to the bathroom could be so alluring to your dog and make him keep following you?

It’s like he is being compelled by some “strange force” to follow you… Is there a scientific explanation for this phenomenon?

This post gives an explanation of why your dog follows you to the bathroom.

He is acting on his protective instinct to keep you from harm when he feels that you are most vulnerable when you are doing your “business”. He is worried that you will abandon him, or he is curious about what you are doing inside the toilet. He smells abnormalities from your discharge and wants to do his investigations.

His Protective Instinct Led Him to Act in This Manner

Velcro dogs such as Great Dane, Pug, French Bulldog, Collie, Shar Pei, Labrador Retriever and German Shepherd are extremely clingy, and they want to be with you for every moment.

This makes them keep following you all day long regardless of where you go, even when you are doing your “business”.

This clingy behavior is the result of your dog being an extremely loyal companion and a pack member. He feels the need to protect you from any harm or danger, and to keep a close watch on you.

Though it is his natural instinct to be protective of his pack, it could be a little annoying to you, especially if you are doing some “personal business” that needs some privacy.

There are many ways to control this behavior of your dog, such as using a leash to keep him away from following you or to have him in a crate when you need him to be away from you.

He Is Worried That You Will Abandon Him

Your dog will follow you to the bathroom when he is in fear that you will abandon him. This is often the case of him suffering from separation anxiety.

If your dog used to be a stray dog before he was rescued to a shelter home, he will be fearful of abandonment because he knows what it is like to be on his own in the street looking for food and shelter.

He will be desperately trying to get your attention and show you that he is not unwanted.

Separation anxiety and fear of the unknown are the common behaviors exhibited by a stray dog and this is why it is so important for you to spend time with him and give him affection to help him overcome this unease condition.

It may take some time, but it will all be worth it in the end. Treat him as if he were your own. Give him attention, love and care.

Remember not to be hard on him when he behaves in a way that you find disturbing. He needs your understanding and patience. Be gentle with him, and he will learn to trust you.

You should also take him out for frequent walks. A walk will help him to burn off his energy, and it will also help him to learn how to socialize with other pets and people in different environments.

He Is Curious What You Are Doing In There

When your dog observes your regular visit to the washroom, he will be interested in what you are doing there?

He may think that something incredibly interesting is happening there, and he does not want to be left out.

You see, dogs are full of curiosity by nature, and they will be suspicious of the places that you visit too often.

This is in particular, if you had forbidden him to follow you to that place!

He will be more curious and determined to find out what is going on in that place as he is convinced that something important is happening there, and he wants to do his own investigation.

If your dog belongs to “Curious Dog Breeds” such as German Shepherd, Pocket Beagle, Schipperke or Beagador, that possess an even more intense sense of curiosity, then he might start snooping around the bathroom without you even noticing it!

You might even find him just sitting quietly inside the bathroom waiting for you and he won’t move until he is done with his investigation of what you are doing in your bathroom.

Do not give him any reason to be suspicious about the nature of your visits to the toilet. Just let him follow you and in due time, he will stop doing so once he knows what you are up to.

He Smells Abnormalities Odor From Your Wastes

A dog’s sense of smell is extremely acute, and he has about 300 million olfactory receptors in his nose, as opposed to only 6 million found in a human being.

That makes a dog able to detect odors at much lower concentrations, which can be as low as one part in a billion compared to the parts per million that humans can detect.

So, it’s no wonder dogs have been known to sniff out cancer tumors before doctors performed the diagnosis.

This means your dog can detect through your pee and poo your health status.

When he finds abnormalities, he will keep following you to the toilet to further his investigation and to alert you to the situation.

He is trying to tell you “You are not well” in the safest way he knows and will continue with this act till the abnormal odor goes away.

Some common health issues such as suffering from urinary tract infections, diabetics, kidney or liver diseases and cancer could be easily detected by your dog’s nose through your discharge.

And, if you notice any change in your dog’s behavior like he is sniffing more often and for longer duration on you, then you should definitely go for a check-up. This will give you peace of mind.

You Had Encouraged Him For This Behavior

You are so happy when your dog follows you to the bathroom as you are going to give him a good bath. This happiness makes you keep praising and petting him for being such a good boy!

This simple praise makes him associate following you to the bathroom with getting your love and affection.

And guess what happened next?

He will start doing this act whenever he sees you going to the bathroom as he wants to be praised.

So it is important that you ONLY reward your dog for the behavior or action that you want him to repeat.

Don’t praise him for things that may mislead him to believe that he is doing something right when he is not.

For instance, do not simply praise your dog when he faithfully follows you to the bathroom for his bath.

You should instead ONLY give him praise when you are done with his bath.

This will make him learn that he earns affection and love from you because he has obediently finished his bath, not because he follows you to the bathroom.