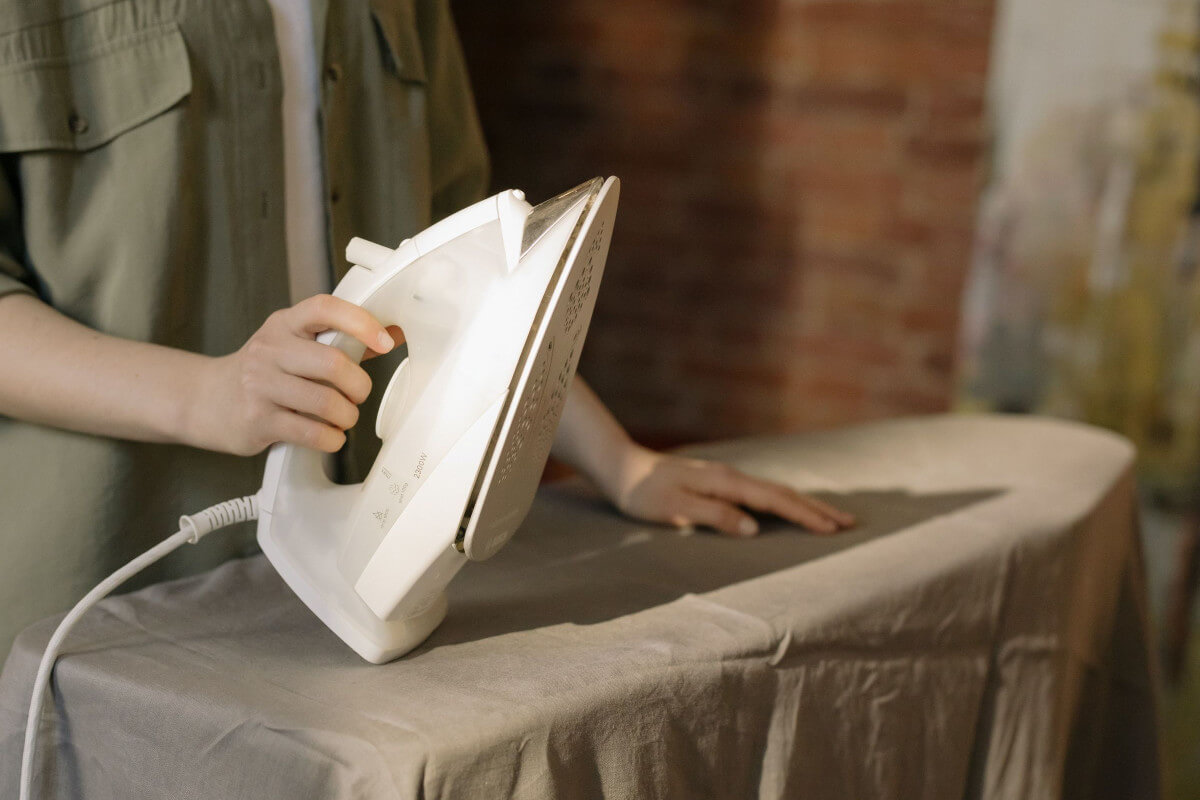 Does your dog frantically bark at the ironing board once he sees it? What is going through his mind when he does this? Is he trying to get your attention, or is there something else going on?

Steam From The Iron Resting On The Board Terrified Him

Have you ever noticed that when you are on an ironing board your dog will not come near it?

This is because when you are using a steam iron on the ironing board, your dog will have the impression that there is some threat to it as he sees smoke coming out from it.

This makes him wary of the board, and he will stay clear of it.

The way to solve it is simple. Just use a dry iron instead of a steamed one. A dry iron creates no smoke and that will ease your dog’s anxiety.

Sounds Generated From Folding The Board Frighten Him

It is possible that the sounds made by folding and opening the ironing board remind him of something he is afraid of.

The sound reinforced him of some painful experiences that he had gone through before.

For example, the folding sound of the ironing board is similar to that of opening an umbrella, and he could have had a bad experience of being hit by an opened umbrella.

This unpleasant experience caused him to develop a phobia whenever he heard similar sounds.

Dogs can be fearful of any sounds if they associate them with a traumatic experience. You will be surprised that the sound of a guitar, which we find to be enjoyable, can be frightening to a dog.

An Unpleasant Experience Associated With Ironing Board

Your dog could have been hit by a standing ironing board that falls on him and that makes him fearful of anything that resembles a long board with standing legs.

He would start trembling and barking at the board the moment he saw them in sight.

This fear is caused by the fact that your dog sees boards as something that could hurt him since it had caused him to be in great pain before.

He had associated the board with something BAD that would happen to him whenever he saw it.

That makes him believe that the ironing boards with standing legs are some kind of threat to him, and he will do everything to get away from them.

What you can do is to train him to approach the board as if it were a piece of furniture that was harmless to him.

Offer him a treat as a reward when he gets close to it without fear. This way, he will gradually feel safe and comfortable around the board.

Board With Retractable Legs Scared Him

Dogs are naturally curious about new things surrounding them and would love to explore them.

Having said that, there are certain things that can make your dog fearful, especially if they are long, tall and big, such as an ironing board.

This fearful behavior seems to be more prominent in small dog breeds such as Chihuahua, Poodle and French Bulldog.

That happened to my Chihuahua as well when I first adopted him.

He is not used to being intimidated by big things and will show fear and start barking at the ironing board when he first sees them. He probably finds it scary to approach the ironing board.

You see, an ironing board with retractable legs is going to be a scary thing for your dog as he sees it as a moving “creature” that could be a potential threat to him.

When you move the board around, he will perceive that it is chasing after him and will start to flee for his life.

This is particularly so if this is the first time that he had seen an ironing board.

He doesn’t know what it is, and he is afraid that it will hurt him.

His Former Owner Had Conditioned Him To Fear It

It could be the case that his previous owner had conditioned him to stay away from the ironing board in the fear that he may get hurt if the heavy board fell onto him.

The way this conditioning is carried out is through making your dog feel that BAD things will happen when he goes near the board, such as him getting a scolding or punishment.

This conditioning makes your dog learn that whenever he sees an ironing board, he ought to flee, because it is going to be an unpleasant experience.

The noise of the iron pressing on the fabric during ironing makes him uncomfortable.

You may not be able to perceive any sounds generated by this act, but your dog (having an acute hearing) will be able to hear those sounds.

Keep in mind that dogs are often able to hear sounds that aren’t audible to humans.

This makes him fearful whenever he sees you taking the board to prepare for the ironing.

He will start to bite on the stands of the board as an attempt to stop you from performing this task.

So, it is not the board that is triggering his fear. Rather, it is the process of ironing the clothes (sounds generated) that makes him nervous and fearful.

How To Make Your Dog Overcome His Fear Of The Ironing Board?

Do not punish your dog or reprimand him for being frightened. Instead, try to show him that the board isn’t as frightening as he believes it is.

1. Place the ironing board in a room that your dog is familiar with. That will reduce his anxiety about the environment.

2. Put a highly valuable treat, such as a piece of beef or chicken, about 1 meter away from the board. The intention is to make your dog go into the room to eat the treat with the board right in front of him.

3. Be patient in this step as your first attempt may not work. You might need to change the treat if the initial treat doesn’t make your dog make his move to eat them.

4. Once your dog successfully makes his brave move to eat the treat, you can increase the challenge by placing the treat closer to the board, maybe at 0.5 meters.

5. Keep repeating the training and offer your dog his rewards. The goal is to make him feel comfortable eating his treat with the board right beside him. This is possible once your dog learns to associate the board with a rewarding experience.

6. Do away with the treats once your dog no longer shows any fear towards the board. You can replace the treat with praise when he approaches the ironing board calmly and stays there for a few seconds.