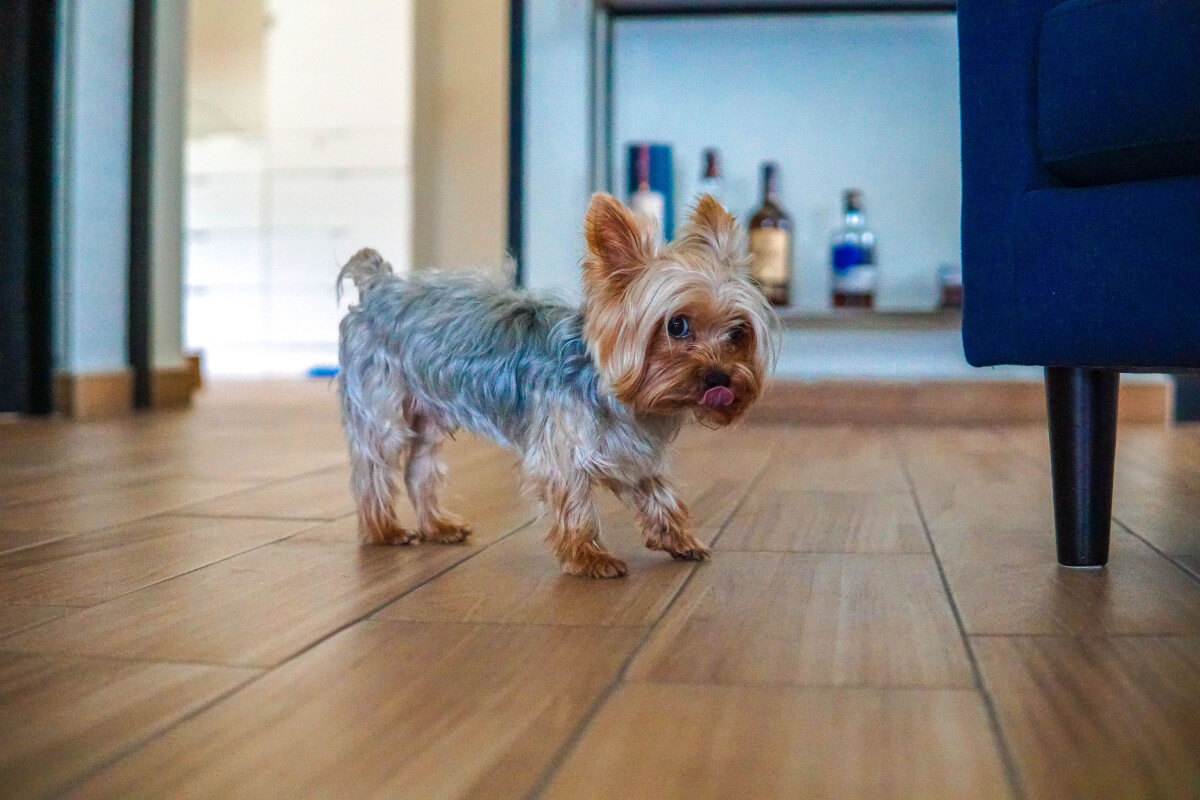 Leaving your dog free in the house is a matter of trust. If you can trust your dog to be safe and obedient in the house (not going to cause harm to himself or others or create havoc in the house), he can be allowed to roam around the house unattended.

Having said that, there are some cautious dog owners who are firm believers that even if their dogs are already house-trained, they should keep their dogs confined to one part of the house when they aren’t at home.

They believe that if they let their pets roam around the house without their supervision, there’s a good chance that “disaster” will happen.

That is, their dogs will start to misbehave (“destroy” the house) when they are teething, feeling bored or anxious.

Or they may have ingested something toxic (such as medicine, household cleaners and fertilizer) or get chocked as the result of swallowing something sharp or hard.

Therefore, there is NO definite answer as to whether you should let your dog roam in the house. This depends solely on your “trustworthiness” towards your dog!

You can start him in puppy training at around 6 months old (assuming you are getting a young pup). Keep your puppy closely supervised till he is fully house-trained.

The Personality Traits of Your Dog Play a Role

Besides trusting that your dog will “behave” himself, it is also important to understand the personality traits of your dog before giving him free rein in your home.

Being aware of the characteristics of your dog is extremely important as it will influence your decision.

In the case of Border Collies, Dalmatians, and Siberian Huskies, they are extremely hyperactive and require a great deal of stimulation and exercise, and if there is no outlet for their pent-up energy (freedom to roam), they can become restless and aggressive.

Whereas dogs such as Shih Tzu, Bullmastiff, Pug and Miniature Pinscher are more mellow and prefer to just chill around. These breeds of dogs are fine with being confined in an enclosed area.

It’s also important to note that not all breeds of dogs are suited to being free in the house.

For instance, dog breeds such as Doberman Pinscher, Rottweiler and BullMastiff are very territorial, and may turn aggressive upon seeing unfamiliar people (visitors or relatives) in the home as they see them as invading their territories.

These breeds should be allowed to roam freely in the house only when they have been well-trained.

If your dog is prone to barking or jumping on people, you should keep him in a crate till he is trained to behave himself.

What Is Your Dog’s Temperament?

The temperament of a dog relates to his overall behavior towards other dogs and people, and is affected by both hereditary and environmental factors.

The temperament of dogs can be divided into three categories: assertive, neutral, and passive.

Dogs that are assertive can be rough with toys, other pets, and property. They are very action-oriented, possessive, and territorial. They have their own rules and do not respect boundaries. Their play fighting often turns into real fighting.

Neutral dogs are calm and display sociable behavior. To initiate play, they use play bows and enjoy playing with other dogs. If there is no one to play with, they find other nondestructive activities to entertain themselves. When confronted, they avoid conflict by walking away or acting passive.

Passive dogs lack confidence and coping skills. Rather than mingle with other people, they prefer to sit next to you or be alone. It is not uncommon for them to appear anxious and stress.

If your dog is an assertive and aggressive dog, allowing him to roam freely in the house might not be a wise choice unless he has been well-trained.

Of course, even a neutral or passive dog may misbehave when they are teething or bored. Therefore, it’s important to know what triggers your dog’s behavior so that you can prevent it from happening.

What Alternative Do You Have If Roaming in the House Is Not Appropriate?

Since dogs are social animals, if they aren’t allowed to move around and explore their surroundings and interact with other dogs or people, they will begin to feel lonely and depressed.

They might even develop a disorder known as separation anxiety. Thus, allowing your dog to roam freely in a secure environment will give him a chance to socialize and play.

If roaming in the house is not appropriate (due to the risk of accidents), let your dog roam around your backyard.

You should make sure that the area you choose to let your dog roam is safe from any potential risks.

A large yard is an ideal environment for a dog to roam. However, if you don’t have a fenced yard, make sure you get it fenced up before allowing your dog to roam around as you certainly do not want him to dash out onto the road!

Keep in mind that an untrained dog can exhibit dangerous behaviors when roaming.

So make sure that your dog is being trained on some basic commands such as “sit”, “down”, and “come” as they are extremely useful when you need to “recall” him back.

You can also leave your dog in a room with a baby gate in place. This way, your dog will be able to roam around in a defined space and will be stopped by a physical barrier if he attempts to go out of the area.

This is certainly going to be much more spacious than having your dog kept in his crate.

Is There a Reason Why Dogs Roam Around the House?

It is not uncommon for bored dogs to wander around the house in search of something to do or companionship. They may also do so because they are afraid of being left alone.

In many cases, wandering can be a normal part of the dog’s social life, and can occur if the dog does not have enough attention, stimulation, or company.

If you want to put an end to your dog’s wandering, you will need to ensure that your dog gets something to keep him engaged whenever he is awake. This will keep him busy and prevent him from feeling bored.

This could be getting him some chewing toys to keep him company and planning a routine exercise (physical and mental simulation workout) for him so that there is an outlet for him to release his pent-up energy.

As an old saying goes, “A tired dog is a good dog”, and it couldn’t be more true.

Also, set aside at least an hour daily to keep your dog company so that he gets to feel your love for him and that should help to ease his separation anxiety and gain his trust.

You can make use of the physical exercise opportunity by playing a game of fetch or hide and seek with your dog. This will help to build a strong bond with him.

As for the mental simulation exercise, you can teach him some new tricks that require him to utilize his brain power or to have him practice some basic obedience training.