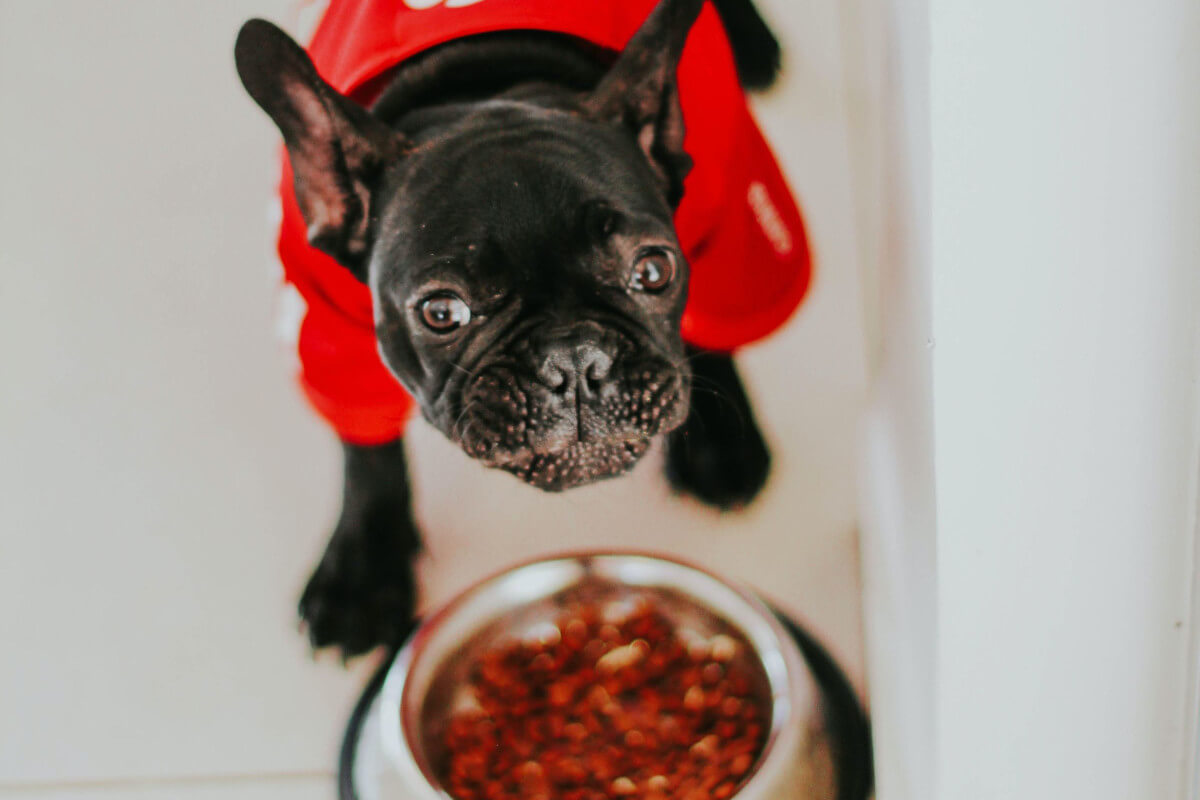 You may be pondering why your dog isn’t chewing his food and looking for ways to encourage him to do so.

You see, it is pretty common for dogs not to chew their food unless it is in big pieces, and they have difficulty swallowing it.

And the fact that their stomach is extremely acidic, swallowing food without any chewing will NOT affect their digestion at all!

Of course, there is still a risk of them getting choked during the swallowing, especially if the food is dry and comes with bones. This is what you should be mindful of.

The following are what you can do to “motivate” your dog to do his chewing.

Encourage your dog to chew his food by making the situation unfavorable for him to swallow, such as using slow feeder bowls, snuffle mat (make him look for food) or using a cup for food. “Drip feeding” him or moisten his food to slow down his eating pace. Make sure he is not starving or having any tooth pain.

Make It Difficult For Him To Gorge On Food

While you cannot force your dog to chew his food, you can certainly slow down his eating pace by making it difficult for him to gorge on food.

You can do it in various ways:

These types of feeder bowls will slow down your dog’s eating pace as he has to work to get the food out of the bowl.

They are usually made of hard plastic and have perforated bottoms.

The perforations allow the dog to eat the food but make it difficult for him to remove all the food from the bowl.

Use A Snuffle Mat

You can have the kibble sprinkled on a snuffle mat and that would make your dog busy with his sniffing for the hidden treats on the mat and slow down his eating.

The idea is to hide the foods so that your dog will not be able to gorge on them right away. It is like training your dog to work for his food.

Use A Cup Rather Than A Food Bowl

Make it difficult for your dog to pick up his food by restricting the surface area that he can access the food.

This can be done by using a cup rather than a food bowl to hold his kibble.

Only half filled the cup with the kibble and that would make your dog spend more effort (“dig”deeper) to get the food out of the small cup.

That way, he’ll have to work harder to get all of his kibble and that will slow down his eating pace.

Slowly re-fill the cup with kibble once he is done with the food.

Rather than filling up his food bowl to the brim with kibble, get a handful of kibble and place it in his bowl.

This will limit the amount of food that he can gulp and make him take a break before you fill up the bowl again with another handful of kibble.

By doing this, he will learn that if he finishes his food too fast, he will have to “wait” for his next serving of kibble.

This will prompt him to eat slowly and enjoy each bite of his meal, as he knows that the quicker he finishes the food, the longer he has to wait for his next serving.

Moisten His Food With Water

You should moisten his food with water and this will slow down his eating as he will need to spend more time licking up the wet food from his food bowl.

He is also less likely to get choked on wet food.

What you can do is add broth to his dry kibble and mix it well. If he doesn’t like the taste of the broth, then just add water with a little honey to sweeten the mixture.

You could also try mixing some pumpkin or carrot juice into his dry food. If none of these ideas work, then maybe you should consider switching him to a dog wet food.

Make Sure He Is NOT Starving

It’s going to be difficult to make a starving dog take his meal slowly. He is going to gulp down the food right in front of him like there is no tomorrow.

That’s a natural behavior as his hunger has taken over his mind.

So it’s important that your dog is well-fed with a balanced diet, and he should not go hungry. Of course, you should also not feed him too much.

So what you need to do is find the right amount of food that will satisfy his hunger but not make him gain weight.

In regard to feeding your dog, you should aim to provide between 2-4% of his body weight in calories every day.

This is just a general guideline, and you should take into consideration various factors such as his breed, size, age and how active he is to determine his food serving.

Ensure He Is Not Having Tooth Pain

What do you do when you have toothache? You will probably go for food that doesn’t need you to do much chewing, and you can swallow easily, such as oatmeal.

Your dog, however, will not have this “privilege”. He is unable to “tell” you that he is having tooth discomfort unless you are observant enough from his action.

So he will do it his own way, which is to swallow the food if that is possible. That is a risk, as if you have given him meat that comes with a bone, he might get choked.

It is your responsibility to perform a check on his teeth and gums regularly.

Hold his mouth open so that you can inspect his teeth and gums for any sign of redness or swelling.

Also, look for loose or displaced teeth. These are signs of infection and should be treated immediately.

Ease His Fear That His Food Will Be Stolen

Dogs in the wild often devour their food and not slowly chew it as we do. They simply swallow them.

They do this because of the fear that if they don’t eat everything swiftly, they are going to lose their food to others who will make their attempt to seize the food from them.

This is especially true if they are in a group where some members will be stealing food from each other.

In such a situation, if a dog doesn’t eat his food he may well find himself left with NO food to eat.

Thus, he had to eat as fast as he could. This is the drive that dogs possess to survive.

Though your dog now lives in a modern world, he still possesses that ancestor’s fear of food getting stolen, which is the reason why he may not want to slow his eating pace and avoid chewing.

In such a case, you will have to retrain him and correct this behavior.

What you can do is to feed him in a crate as that is his personal protected area, and he will feel secure there.

He will not get worried that his food will be stolen and thus will slow down his eating pace and do his chewing.

Of course, you will have to first crate train your dog to make him see the crate as his den, a safe and secure place to be in.