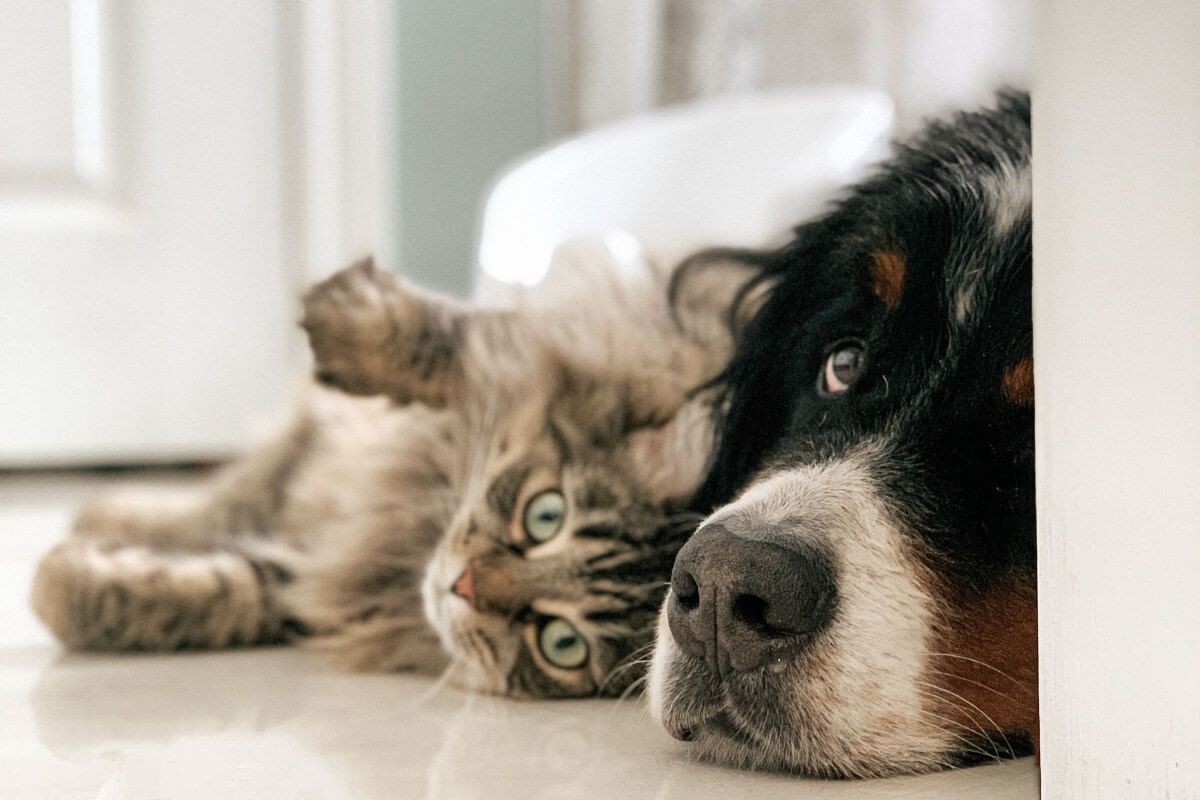 Are you surprised to find that your dog is acting more like a cat than a dog?

He used to jump up at your call, and come when you called him, but is now as independent as a cat.

He will lie on his back with his legs in the air, and beg for food like a kitten, and he also likes to sit on the top of the sofa and curl up on your laps.

What could have brought about these changes?

Your dog is acting like a cat as he has picked up the habit from your residence cat or during the time when he is interacting with cats at the parks. As a “watchdog”, he likes to stand at vantage points and his natural instinct of self-reliance makes him exhibit a cat-like independent character.

He Has Learned The Habit From A Cat

This is an unmistakable sign that he has learned the habit from a cat.

The cat’s habit of sleeping in a crouching position is very much like what he is doing.

This could happen if you have recently adopted a cat and your dog has been exposed to the cat.

He had started to pick up whatever the cat was doing (eating, sleeping and playing) as he was feeling bored and had nothing else to keep him occupied.

He will find some way to entertain himself, which might involve imitating a cat.

What you can do is to plan some activities to keep him busy so that he will not have the energy to imitate the cat.

You can play with him, train him, teach him new tricks, etc. The point is to get him used to having something to do rather than letting him do nothing.

Also, make sure that the cat is not around when he is doing these activities.

You may want to consider putting the cat in another room.

If you see him trying to imitate the cat, immediately distract him by taking him for a walk or by playing with him.

You can also try to give him something such as his favorite chewing toy or reward him with a high value treat for giving you his attention.

This will make him realize that there is something more important than being like a cat.

It is very important that you do NOT punish him for his bad behavior as that would only make him continue with it.

You should instead praise and reward him for his good behavior when he stops imitating the cat when you ask him to do so.

This is a very good way of breaking the habit as well as preventing him from doing it in the future.

He will learn that GOOD things will happen when he stops behaving like a cat!

However, if you are certain that it is due to some psychological reason, then you should seek help from an experienced animal behaviorist who will help you to address the triggering causes.

He Enjoys The View From A Higher Point (Watchdogs)

It is common to see cats on top of furniture, fences, and other things.

These vantage points allow them to observe their surroundings and keep them safe from their prey.

Some breeds of dogs, especially watchdogs such as Terriers, Poodle, Shih Tzu, Dachshund and Chihuahua, like to climb up high places for the purpose of seeing what’s going on.

It is their natural instinct to keep a lookout, and they like to be in high places and prefer to sleep in a closet, where they can get the best view.

These dogs often get in trouble by getting caught and cannot climb down.

They get stuck up there and will not move or act out of fear.

This happens because their bodies are not as flexible as a cat, and they have difficulty jumping down from heights.

My chihuahua likes to be on top of my sofa so that he can observe everything in the house without the need to move around, and he can also guard the door.

However, there are times when he gets himself “trapped” in the closet and has difficulty breaking free.

He Is Instinctively More Independent

The fact that cats do not rely on their owners to keep them safe makes them more independent than dogs.

Separation from their owners also doesn’t seem to bother them as much as it does for dogs.

That could possibly make you feel that your dog is acting like a cat when he starts to be less dependent on you.

In fact, some breeds of dog such as Akita, Jack Russell Terrier, Cairn Terrier, Greyhound and Siberian Husky simply have a stronger sense of independence than many other breeds.

This independence makes them exhibit cat-like behavior in the eyes of their owners.

So, if your dog belongs to one of these breeds, you may find him to be unlike other breeds of dog who love to cling to you.

He is content with spending his time alone, and you may find him to be a loner.

You will not need to be with him all the time, and he will be satisfied with just some chewing toys to keep him occupied.

In fact, you may find that he has a different approach to life from other dogs.

He may be aloof to people and be hard to train.

He Has Skin Disorder

Cats are well known for grooming themselves by licking their fur and rubbing it on the ground.

If you see your dog starting to excessively groom himself just like a cat, it could be a sign of him suffering from skin disorder.

Some obvious signs of skin disorder in dogs are excessive licking, scratching and biting at their coat.

The most common skin disease is mange.

Mange is a highly contagious disease that is caused by mites and can be passed from one dog to another through direct contact with contaminated skin and saliva.

It is best prevented by routine flea control, but if your dog develops symptoms of mange, it should be isolated to prevent further spread.

Treatment for mange involves the application of a medicated shampoo and an anti-inflammatory medication.

It is important to treat the problem as soon as possible to avoid any further spread.

If you think that your dog has been exposed to mange, bring him to see a vet as soon as possible for treatment.