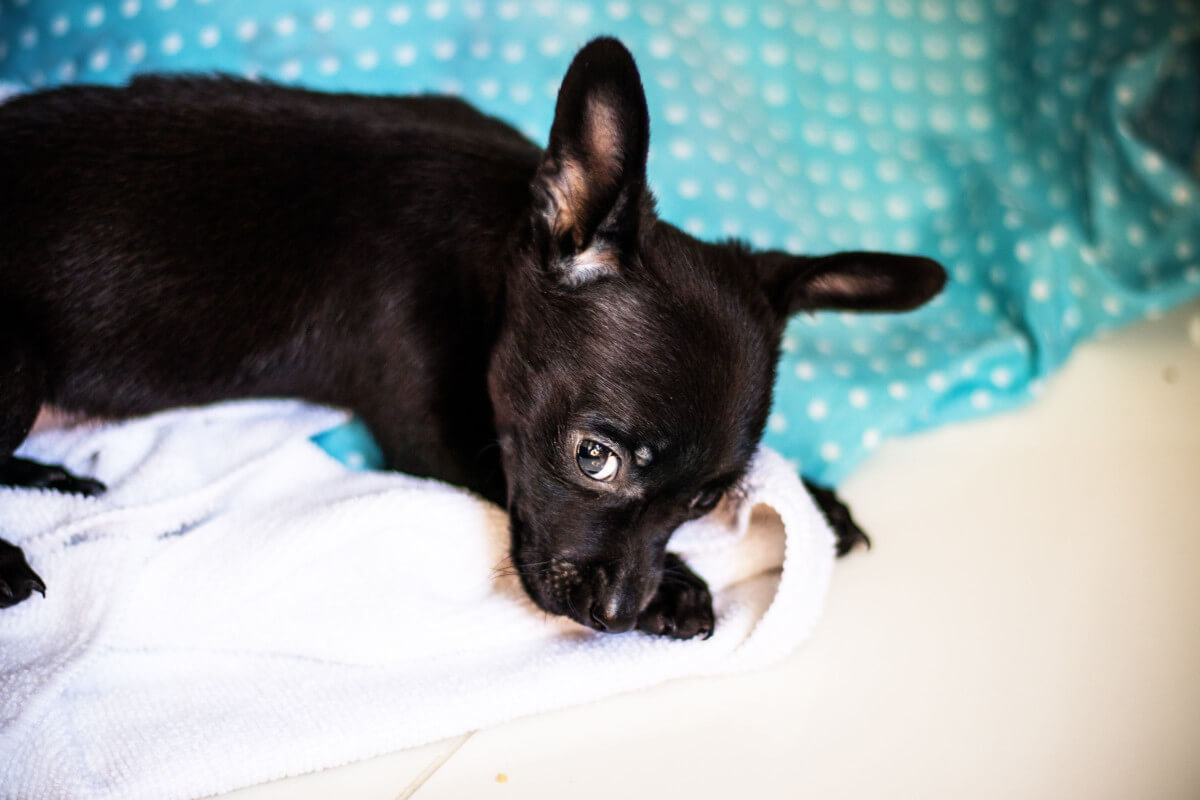 What causes Chihuahuas to sleep with their tongues out? This may seem like a harmless habit, but it could also signify an underlying health problem.

There is a possibility that the dog feels too hot or is experiencing some dental pain.

Let’s take a closer look at what’s going on here. What would make a dog sleep in such a manner?

To Regulate His Body’s Temperature

Chihuahuas sleep with their tongues out because they are very sensitive to temperature changes. This action of sticking out their tongue helps them to regulate their body temperature.

This is particularly so if your dog is sleeping in a hot and dry environment.

Due to the fact that a dog’s sweat glands are predominantly located on the paw pads, so dogs don’t sweat the same way as humans.

In order to release heat from their bodies, dogs pant to moisten their tongues, mouths, and throats. The moisture will evaporate while they breathe, keeping them cool.

That is why you will often find your Chihuahua starts panting and holding his tongue out whenever he feels too warm.

You may even find him sleeping in the bathroom as it is going to be much cooler laying on the cold bathtub.

He Is In A Relaxed State

Most often, the tongue of a RELAXED dog may be hanging out a bit as a result of his mouth being open. For this instance, there is nothing to worry about.

Your Chihuahua is simply enjoying the tranquility and a sense of relaxation is often associated with being cool.

And, as it turns out, nothing in the world is cooler than him lying on his back, sticking out his tongue and enjoying the moment.

He’s Feeling Excited in His Sleep

When Chihuahuas are excited, they often pant and hang out their tongue due to the increased heart rate resulting from the excitement.

You will likely observe this behavior when your Chihuahua is having a thrilling dream that excites him so much. It is not something to be concerned about.

In his dream, he may be dreaming of chasing squirrels, playing with balls or having a good time at the park.

This behavior is likely going to go off when he ends his thrilling dream.

His Sleep Is Disrupted by Stress and Anxiety

Chihuahuas are very sensitive animals. They are known for being extremely nervous and anxious. They can become stressed when they are separated from their owners or when they feel like they are going to be hurt.

If your Chihuahua is undergoing a bad dream, that is, he is dreaming that he is being chased by his predators, he is likely to be panting and breathing heavily, with his tongue sticking out.

This is because of the fear that he is experiencing.

It is possible that your dog is in distress if he has recurring bad dreams.

Your Chihuahua could be anxious about something that is happening in his life. It could be something unpleasant that had happened to him recently or in the past.

This unpleasant experience is affecting his sleep patterns and will need your help to overcome his fears.

When you want your dog to wake up from his bad dream, you should use a gentle tone of voice to wake him up. You should never pet him, as this will increase his anxiety and cause him to attack you.

Make sure that you are paying attention to your dog’s body language during the day to find out what is causing his stress and anxiety.

Signs of anxiety include tucking in his ears and tail, showing the whites of his eyes, excessive lip and paws licking, panting, yawning, and looking away from you.

His body language, as well as changes in behavior, may indicate that he is stressed or anxious.

Dehydration Is Affecting Your Dog

Dehydration may cause your Chihuahua to stick his tongue out.

The reason for this is that his body is not producing enough moisture, and by putting his tongues out, he is trying to absorb air moisture.

As a result, it is essential to keep an eye on his body temperature and drinking habits, and to make sure he always has access to water.

If your dog’s thirst isn’t being satisfied, he could be in a state of dehydration.

In general, dogs need one ounce of fluids for each pound of their body weight per day. With that in mind, a 10-pound dog would need more than one cup of clean water each day, and if he is an active breed, he may need more water.

Other signs of dehydration in dogs include a loss of appetite, sunken eyes, a general feeling of lethargy and excessive panting.

A variety of conditions are treated with medications for dogs, and these medications may have side effects.

These side effects are sometimes unexpected and unpleasant. For example, they can make your dog’s mouth dry and sore and his tongue swelling up.

If your dog is on medication, it’s likely that he is suffering from a side effect from the medications that your veterinarian gives to him.

The medication could have made his tongue swollen and he is trying to ease the pain by sticking it out.

I would suggest that you bring your pet to see the veterinarian again as soon as possible if that is the case.

Hanging Tongue Syndrome (HTS) is a condition in which a dog’s tongue hangs out of his mouth when he is at rest.

HTS is often caused by a genetic predisposition, and dogs with flat faces (also known as brachycephalic) such as French bulldogs, Pugs, Shih Tzus and Boxers are more likely to have this condition.

If your Chihuahua has a longer tongue (than usual) which doesn’t fit well in his mouth, it might protrude from his mouth as he opens up his jaws during his sleep.

This tongue behavior is involuntary; your Chihuahua simply can’t help it.

Are you aware that a dog’s teeth serve more than just chewing food? They ensure that the tongue does not slip out of the mouth when the dog relaxes his jaw during his sleep.

It is for this reason that if a dog loses his teeth due to dental disease, his tongue will naturally hang out of his mouth as he opens his jaw in his sleep.

The most common cause of tooth loss in dogs is periodontal disease. This disorder can cause gum recession, tooth looseness and tooth loss.

Dental problems in dogs are just as serious as those in humans, so it is important to pay close attention to your dog’s teeth and visit a vet for regular checkups.

If your Chihuahua keeps sticking his tongue out whether he is awake or asleep, it could be because he has an upper respiratory infection or allergies.

This disorder causes him to have trouble breathing, and that is why he is opening up his mouth, gasping for air. This is a natural way for him to get a little more air in his lungs through breathing with his mouth.

As he opens his mouth, his tongue will naturally start to hang out.

In dogs, allergies are most commonly manifested as itching of the skin, either localized (in one part of the body) or generalized (all over the body).

Sometimes, the symptoms are respiratory in nature, such as wheezing, coughing, and sneezing. It is also possible that the eyes or nose may discharge runny fluids at times.

If you observe your dog is experiencing these symptoms, bring him to see a vet immediately as this could be a life-threatening condition.