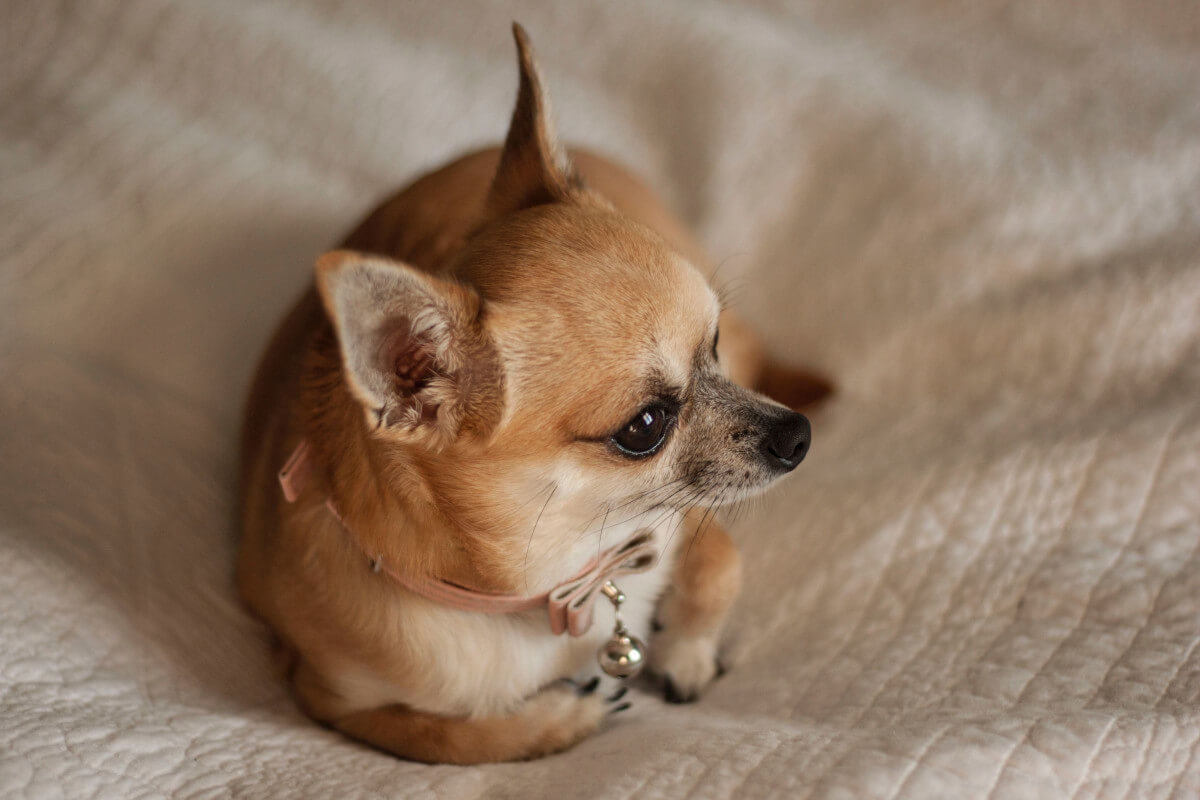 Is there anything to worry about when my Chihuahua places his ears back? Let’s find out in this post.

If your dog pulls back his ears, he is either upset or afraid. He may also be trying to hear what is going on behind him. This gesture is an attempt to appease the other party. There were injuries to his ears. He is showing an interest in another female dog.

Knowing what the reasons that caused him to react in this erratic way will help you to figure out what you can do to help him.

Often, tucked ears indicate sorrow. Your Chihuahua is doing this to express his unhappiness, such as the moment when you are leaving him alone for work or when he’s on a leash.

He could also be expressing sadness when you have been neglecting him for quite a while. By tucking his ears back, this is a quick way for him to let you know that he needs your attention and wants to be held.

If your dog is showing signs of depression, such as a loss of interest in what he once enjoyed, and a change in his eating habits or sleeping patterns, you should seek professional advice.

Hearing What’s Going on Behind Him

Your Chihuahua may just be trying to listen to what’s going on around him. This is a very common behavior for dogs.

A dog may pull his ears back occasionally in order to better hear what is going on behind him.

When you’re out in the garden with your dog, and someone calls him from inside the house, you will see him reacting in this way.

In a busy street, your dog may also put his ears back and raise his head. He uses this behavior to improve his hearing.

If your dog does this regularly, you may want to bring him to see a vet for a hearing check. He could be suffering from hearing impairment and need medical care.

Your Chihuahua may also raise his head and put his ears back when he is startled or frightened.

This could be the case when he is in an unfamiliar environment, and he hears strange noises and is concerned with his safety, or when thunderstorms or fireworks are taking place.

As a result, he will start to be alert and on the lookout for any potential threats. This behavior may be accompanied by other ‘fearful’ body language, such as:

Fear can also make dogs aggressive, and they will attack anyone who approaches them. If you notice a dog with a stiff body posture, baring teeth, retracted ears, and growling, be cautious.

When a dog is not properly trained in socialization, he will tend to be fearful when facing unknown situations. So get your Chihuahua to be trained on socialization as soon as you have adopted him.

This can be done by:

2. Introduce your dog to new people and things in your home gradually. You can start by introducing him to things in your living room or kitchen, having someone come to your house and greet your dog for a few minutes.

3. Bring him out to a dog park to play with other dogs, where he can meet new people. If your dog shows any signs of fear or aggression toward other dogs or strangers, make sure to desensitize him.

This can be done by using rewards like treats to teach your dog to respond calmly when another dog approaches him. Giving him positive reinforcement when he does so.

Making sure that your dog is supervised closely at all times while he’s meeting other dogs and people.

Chihuahuas are known for their cute looks, but this doesn’t mean that they don’t have any behavior problems. They are often seen as being stubborn, aggressive, nervous, and fearful when facing unfamiliar environments.

An Act of Appeasement

It is natural for dogs to approach someone that they like with their ears back, tails down and wagging, with glaring eyes or heightened blinking.

This gesture is often used as a way to appease another dog or their owners.

Many dogs put their ears back in an effort to calm another aggressive or dominant dog. This behavior is often seen in dogs that are playing or socializing.

If your dog puts his ears back while being petted, it means that he feels comfortable and happy to be with you. He may also exhibit this behavior when he is comfortable with the person he is greeting.

This is a sign of submissive behavior and should not be confused with aggression.

Therefore, if you see your chihuahua holding his ears back with a high wagging tail and a relaxed body when he meets another dog or person, you can be sure that he is expressing his friendliness to them.

An Injury Has Occurred in Their Ears

Dogs will pull back their ears if they’re in pain, for fear of getting hurt more. He is guarding them against further injuries by holding them back.

This happens when they have an ear infection, have been bitten on the ear, or are constantly scratching and shaking their itchy ears.

If you notice that your dog has a red area around his ear, it is possible that he has an injury. This may be caused by a fall, an accident, or being attacked.

To determine what happened, you should examine his ear and surrounding area. If you see a small amount of blood in the ear, or if you feel something soft in the ear, you should take your dog to the veterinarian immediately.

One of the most common causes of ear injury is aural hematomas, or pillow ears.

Dogs suffer from this condition when a blood vessel bursts inside their ear. In most cases, excessive shaking or scratching of the ear can result in this condition.

Redness, swelling, and a puffy, pillow appearance to the ear are the most common symptoms of aural hematoma.

If your dog is showing these signs, call your veterinarian immediately. You should never attempt to drain the blood yourself.

He Is Showing Interest in Another Female Dog

Your male chihuahua is expressing an interest in a female dog. This is a form of body language that is used by dogs to communicate their emotions and is a sign that he wants to be close to her.

It could also be the case that he may just be expressing his friendliness because she is a new friend. It is important to know that this behavior could be a form of communication or an expression of love.

If you are wondering if your chihuahua is interested in a female dog, you should take note of the following signs: