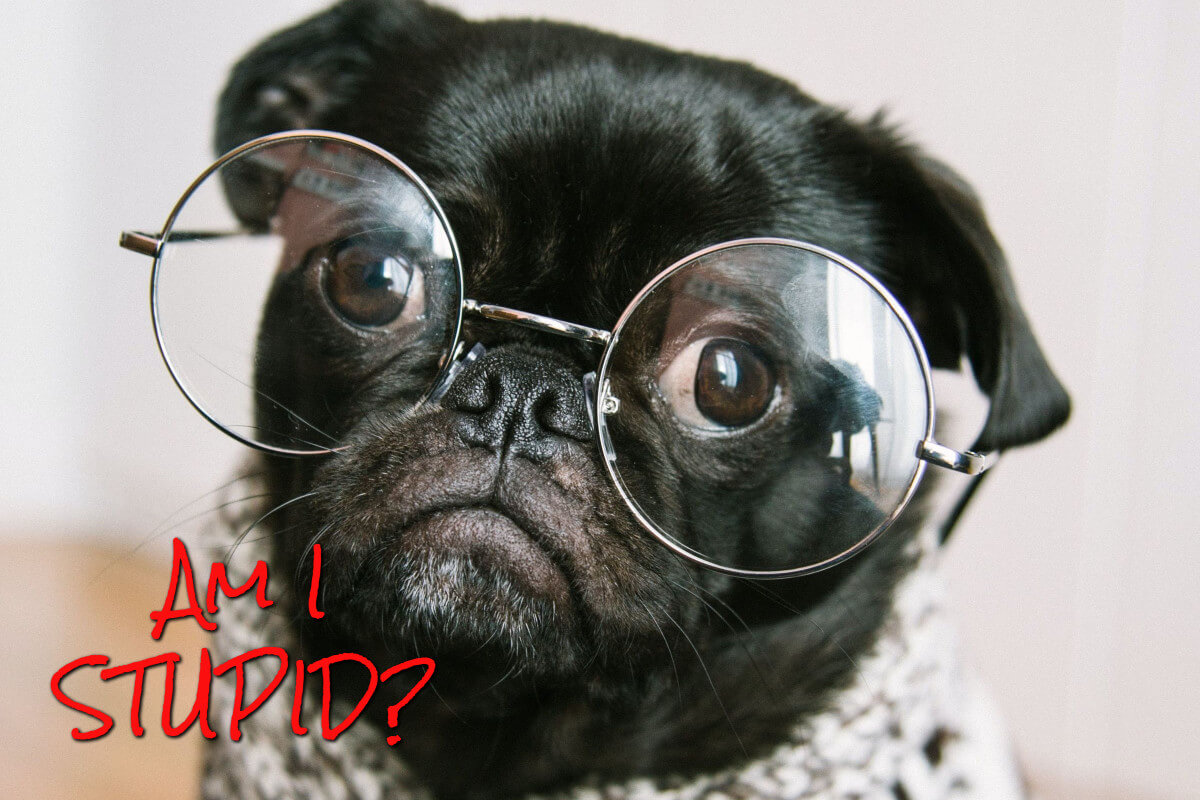 Are there dogs that are too dumb to be trained? You will be surprised to find the truth in this post.

A lot of dog owners think that their dogs are too dumb and can’t be trained. But that’s not true! Some dogs are just too stubborn to listen to their owners, and they just need a little help.

Your dog is certainly not stupid or dumb to learn how to be a good dog.

Here are some tips to help YOU!

Just think about when you first learned to walk, you fell down a lot, but now you can walk without bumping into things.

What it takes is time and effort to learn and, of course, with the help from your parents. This applies to your dog as well. He will learn, but it will take time and patience.

Dogs are intelligent animals and have the ability to learn, understand and change their behaviors.

Training a dog can be a difficult and time-consuming process, and with so many methods and training techniques available, it can be difficult to know which one works the best for your dog.

It is important to know that there is NO single best training technique that works for all dogs.

The following are some of the most common training techniques commonly adopted by dog trainers.

This is a popular, highly effective way of training your dog by using a marker (the sound of the clicker) to tell him that the behavior he’s doing is the right one followed by giving him a reward (small treat) to make him feel that positive experience.

This technique is great for training your dog on some basic commands and good manners, and it’s also a great approach for increasing your dog’s focus on you.

This makes use of the concept of positive reinforcement technique, with the goal of teaching your dog the right behavior.

He is signaled to do a behavior and if he does it, he will get some sort of reward.

The reward can be a small treat, praise from you or a gentle pet on his head, as encouragement.

The key to the success of this training is to reward your dog with something that is of significant value to him.

This is another common technique used in dog training, which aims to stop undesirable behavior.

This is done by “punishing” the wrong behaviors, such as giving him a stern and firm “no” for chewing on something he shouldn’t, or a quick rap on his nose to discipline him while he is acting wrong.

I would strongly recommend that you opt for a positive reinforcement training approach, as dogs learn faster and better when there’s a POSITIVE consequence (rewarding experience) for their behavior.

This training approach will turn any “stupid” dog into a “bright” dog as dog aren’t stupid at all, what they need is some motivation to make them start learning!

Keep away those cruel training tools such as pinch collars, choking chains, shock collars and restrictive muzzles as they can cause fear, anxiety and aggression in your dog, making the inappropriate behavior worse.

In fact, these tools can cause your dog to become defensive and fearful.

Bear in mind that any form of physical punishment on a dog does not help in correcting any undesirable behaviors and may actually break a dog’s spirit and lead to more behavioral problems, particularly if he feels that he has done nothing wrong.

A dog can be trained to do many things, but there are some obedience commands that are essential for your dog to learn outfront to keep him safe.

The “SIT” command is one of the most important commands that your dog ought to learn first, as his safety depends on it.

“Sit” is used in a variety of situations, such as teaching your dog not to jump on other people, not to chase after fast moving animals or cars, or simply asking him to sit in one place while you are busy with another task.

The “STAY” command is another important one to learn because it prevents the dog from running out an open door.

Both the “sit” and the “stay” commands need to be trained progressively until he will sit or stay for a defined period of time or till you give him the “break” command.

To train your dog on these commands, get his attention using your vocal or hand signal, and then meet his gaze.

Have him sit or stay by using the hand signal and then praise and reward him if he follows through.

The goal is to have him associate sitting and staying with the hand signal as well as the verbal command.

The “HEEL” command should also be trained so that your dog will learn to walk by your side and not in front or behind you.

This is important because, as you walk with your dog, he needs to walk by your side so that you will have absolute control of him.This will avoid having to pull on his leash to keep him in line.

In a wide open area such as a dog park, if your dog were to become distracted, a “heel” command will make sure that he will walk by your side and not run off chasing after the distraction that he sees and potentially get lost in the process.

The “COME” command will come in handy when your dog gets distracted, and you want him to come back to you. This is useful, especially when he strays too far away from you or is busy chasing his “prey”.

Lastly, “LEAVE IT” command will be needed if you want your dog to keep his distance from something that you do not want him to touch on, be it your favorite clothing, socks or shoes.

The way to train him to do this is to associate the command “Leave it” with an object that he likes, e.g. a piece of cheese or a treat.

Once he has learned to obey the command, give him a treat. Keep on repeating the process and gradually do away with giving him any treats and let him learn that obeying the command is the natural thing to do.

It is important not to confuse the dog with different commands and make sure that he is always rewarded for obeying during the initial training phase.

Be consistent and take the time needed to achieve your training goals. If you take one step at a time, your dog will enjoy the training process.

You’ll have to make the house rules clear to your puppy and make him know your expectation of his conduct in the house or garden.

Don’t expect your puppy to know these rules by himself and make him learn them as soon as possible.

You should establish a routine for him so that he can quickly grow accustomed to it.

You ought to clearly show your puppy where he should sleep, eat, play and poop.

Reward him with food, love and affection for each new milestone. Even after making your pet know your expectations, he may take some time to get used to it.

Your dog may act “stupid” just to avoid getting scolded when he breaks the house rules.

If he makes a mistake, don’t be angry with him. Just be firm and make him know his mistake and move on.

This is especially important if he is a rescue dog who has spent a lot of time in shelters with little human contact. He may be very afraid of people and may try to defend himself.

At What Age Should a Puppy Be Trained?

Formal training should only be started when the puppies are six months old, as only at that age, will they be able to grasp what you are teaching them because their minds will be much more developed by then.

Of course, that doesn’t necessarily mean that you can’t do any training before that.

You can start with some simple commands such as “sit”, “stay” and “down” when they are 8 weeks old.

Just remember to keep the training session relatively short, as young puppies have a very short attention span and will get distracted easily.

You can also begin socializing with your puppies from an early age (8 weeks old) and help them to be well accustomed to everyday situations.

Start by taking them out to the wider world. You obviously don’t want them to get lost so don’t take them too far at this stage but take them to nearby parks and neighborhoods for a stroll.

They will be curious as to what is going on and may be wary of people and other dogs. Just try to make them feel as comfortable as possible at this stage and let them have some fun.

Can Dementia Make A Dog Stupid?

Dogs are known to be very smart animals.They are capable of understanding many commands and can be trained to do many things.

But what about when they get dementia? Does dementia make a dog stupid?

Dementia is an impairment in the brain that is caused by any disease or ailment that interferes with normal brain function.

When a dog suffers from dementia, he will lose his ability to perform tasks or routines that he used to do and may display unknown behaviors

That may mislead his owner to think that he had become stupid or disobedient. But it is just because his brain is not as strong and clear as it used to be due to this disorder.

The causes of dementia can be due to aging, exposure to environmental factors, genetics, health issues, side effects of some medications, and conditions like Alzheimer’s disease.

Canines that are affected by this disorder will exhibit poor memory and may act irritable, confused, and cautious about their surroundings. They may even become aggressive, disoriented during walks, and lose their appetite.

It is important to seek medical care immediately if you notice your dog experiencing these signs.

I’m sure that there are NO stupid dogs. If there are, they must be hiding their “talents”.

Having said that, there are certainly some dog breeds that are much more intelligent than others.

For example, dog breeds such as Border Collie, Golden Retriever, Doberman Pinscher and Belgian Tervuren are known to have higher IQ’s than other breeds.

You see, different dog breeds have been bred for certain tasks and, as a result, some have developed certain built-in traits that make them more intelligent than other dogs.

This is especially so for search and rescue dogs such as the German Shepherd and Labrador Retriever.

A search and rescue dog is not only intelligent but also has a keen sense of smell. As such, they can explore vast areas faster than a bulldog. But that doesn’t mean that bulldog is dumb, he is simply not trained for the “hunting” job.

Remember that ALL dogs can learn new things.