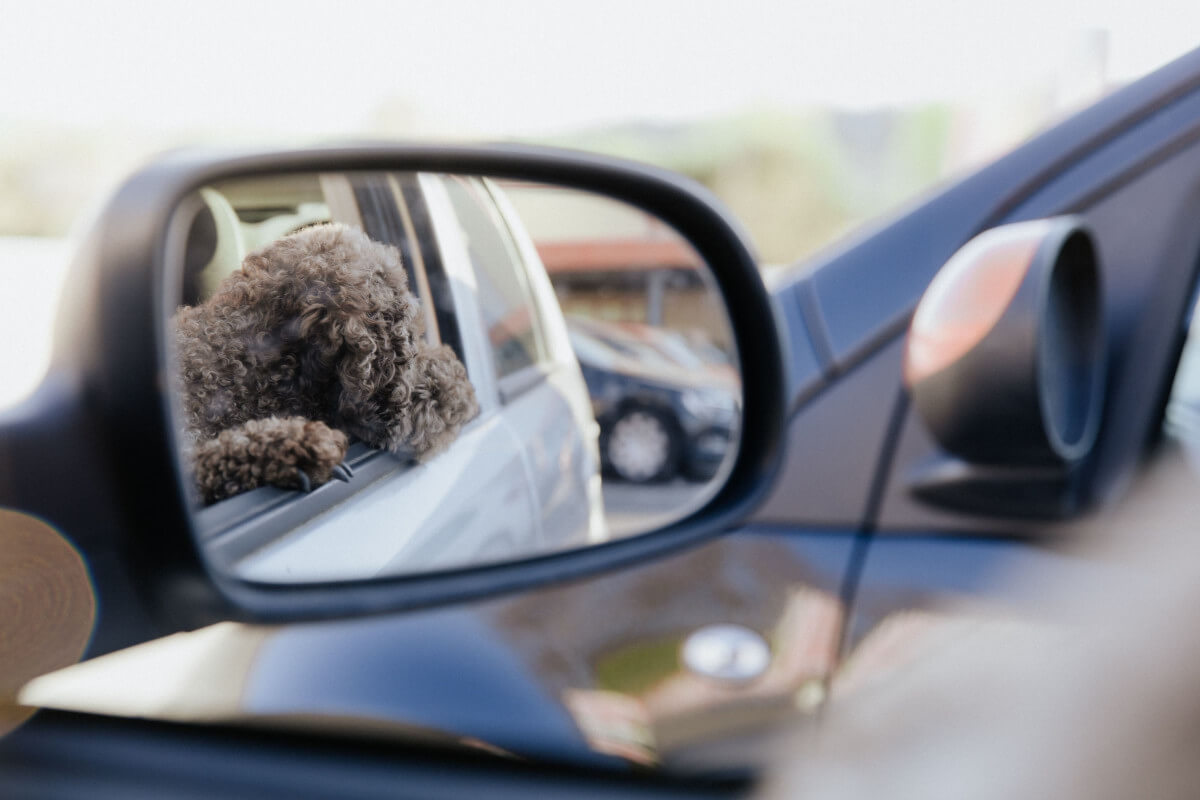 What would you do when you walk past a mirror, I guess you would look at it to have a glance at yourself. That’s a typical behavior of a human being but not for dogs.

What you will see is that your dog will ignore the mirror as if it is “invisible” to him.

This makes you wonder why dogs react differently to mirrors than humans do?

He Finds The Mirror To Be “Uninteresting”

Dogs are very curious animals and will investigate almost anything that catches their acute scent.

This is because they rely on their strong sense of smell to explore their surroundings and keep them from any threat.

For things that do not possess any scent, they will not be interested in them.

This is due to the fact that dog’s sense of smell is far more sensitive than humans.

This makes them depend heavily on their sense of smell for survival.

But as mirrors do not come with any odor, that will not interest him, and he will just move on.

He will notice a “dog” (which is his reflection) in the mirror, but he won’t react to it because there is no scent from that “dog” who appears in the mirror.

In fact, any “object” that appears in the mirror is of no interest to him, as they don’t come with any scent that prompts him to do his investigation.

Your dog will sense that there is no odor or any signs of “life” from the object that appears in the mirror, and he will pass on to investigating other things that catch his attention.

This is in contrast to humans, where we rely more on our sight than our smell to explore our surroundings.

That is why a mirror will never fail to capture our attention as we always love to look nice.

A Learned Behavior During Puppyhood

If your dog has had some exposure to mirror play during his puppyhood, he is likely to have developed an understanding that a mirror is just an image of himself and his interest in the mirror will slowly fade as he matures.

He will learn that mirrors are deceptive. His reflection is only an illusion, so there is nothing that needs his attention.

That is why he becomes more interested in the world around him, especially in things that possess strong scents and will not pay attention to mirrors.

Phobia Of The Mirror

What do you think your dog’s thoughts are about the mirror? Do you think he can sense that the mirror is just a reflection of his image?

As with all dogs, a reflection in a mirror is a new experience, similar to an illusion that they see when they stare at the pool.

It is something that is unfamiliar to your dog and could make him feel uncomfortable.

Your dog will be surprised to see another dog looking right at him when he stares in the mirror. This “dog” has a similar look as him and doesn’t come with any scent.

This creates fear in him as he sees that this “dog” seems to know every of his actions, that is, the moment he makes any move, he reacts instantly without fail.

He may be wondering if this “dog” is there to control him?

It was a mystery to him, as anytime he looked into the mirror, this “dog” would appear instantly and stare at him.

This makes him wary of the mirror and will avoid it.

If you pay a close attention at your dog’s body language while he is staring at the mirror, he will show signs of unease, stress, and even terror.

He may even start to tremble and will even try to run away from the mirror.

There is also a possibility that he is agitated by this “dog”, and starts barking, growling and attacking at him.

This is when he will attempt to break the mirrors rather than running away from them.

In order to help him overcome this fear or aggression, you need to make him know that the “dog” that he sees in the mirror does no harm to him through training.

The ways to do this will be:

1. Stand in front of a mirror and bring your dog close to you using a collar.

2. If he starts to exhibit fear or aggression, calm him down first by distracting him. Give him something to focus on, like a toy or a treat.

3. Once he has calmed down, bring his attention back to you. Slowly and softly praise and pet him.

4. Next, make him see the mirror again as you continue to give him a gentle pet. Keep praising and petting him as he continues looking in the mirror.

5. If your dog continues to act frightened, you may need to distract him again using a toy or food and to continue with the training once he calms down again.

6. Bear in mind that you have to remain calm and patient as you want your dog to feel your calm “energy”.

7. Keep practicing this with your dog till he is able to see himself in the mirror without fear or discomfort. This may take a few sessions.

Almost all dogs are curious about the mirror rather than hating it when they see it for the very first time.

This is because when they see another “dog” in the mirror, they will start to wonder why he is in there, is he a friend or foe, can he “come out” of the mirror and what else is out there?

This is why they will use their paws to hit on the mirrors just to find out more about this mystery finding.

Depending on the natural instinct of the dogs, some dogs exhibit fear upon seeing another “dog” appear right in front of him with no scent (which is his mirror reflection).

This usually happens to timid dog breeds such as Maltese, Pugs and Toy Poodles.

As we know, dogs primarily identify each other through olfactory cues. Therefore, when these timid dogs see another “dog” in the mirror that possesses no odor, it might scare them off.

This is due to the fact that their natural instincts tell them that there might be something out there that could harm them.

However, there are some dogs, especially aggressive dog breeds such as German Shepherd, Rottweiler and Bull Terrier, who will bark, growl and even “attack” the mirror as an attempt to protect themselves from any “unknown” dog that is lurking in the mirror, staring at them.

So, as you have learned in this post, the instinctive behaviors of dogs will determine how they will react to a mirror that they see.