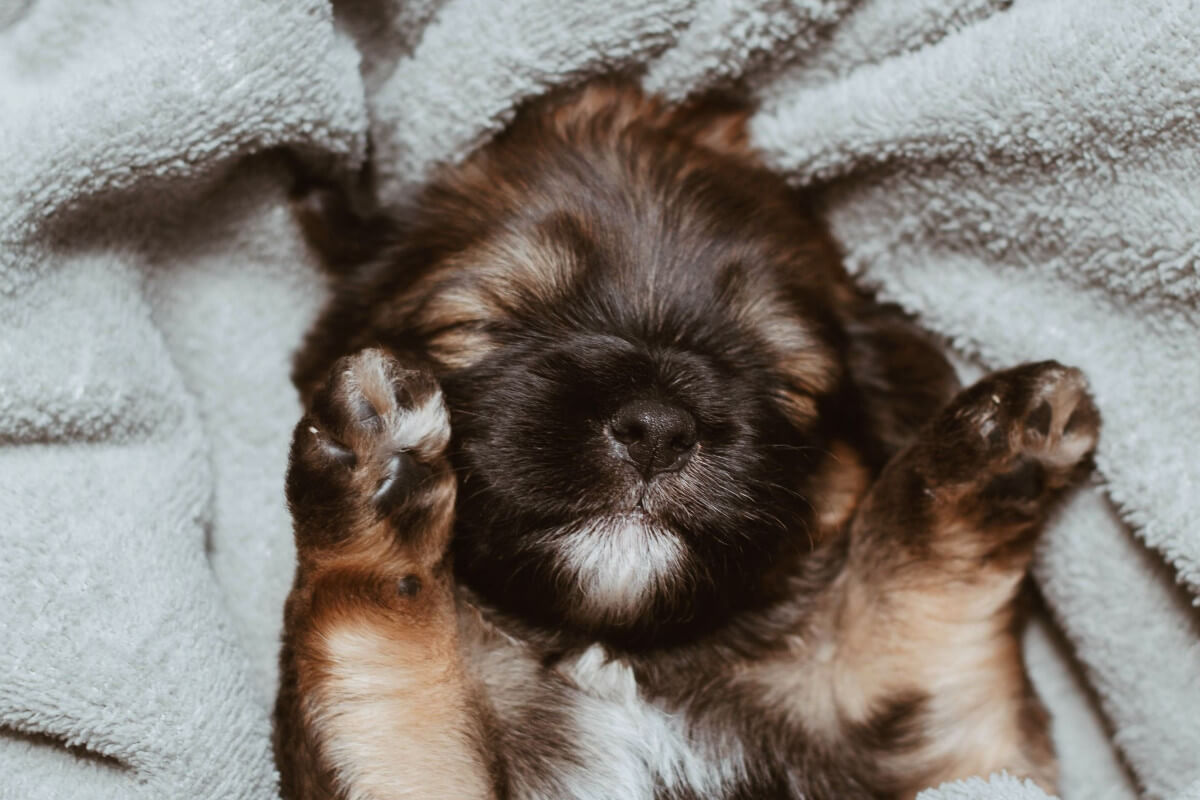 Have you ever wondered what makes your dog howl in his sleep?

He could have a dream that makes him excited, nervous or anxious. Or maybe he is dreaming about YOU!

The howling behavior in your dog’s sleep can be explained by many factors.

You see, just like humans, dogs dream, and they often bark and howl in their sleep, just like many of us do (which we typically mutter in our dream).

When your dog howls in his sleep, he could be having a nightmare due to a BAD experience of the day or over excitement in his play. He might be dreaming about you as he misses you. Losing a companion makes him depressed, and he starts howling in his sleep. Discomfort in his body also triggers this behavior.

But for whatever reasons, it’s certainly not going to be a pleasant experience.

In fact, it can seriously disrupt your family’s quality of life.

Imagine him doing his howling every night….

How would your family members be able to get a good sleep, not mentioning the complaint that you are going to get from your neighbour.

So, what should you do?

Well, the first thing you should do is to pay attention and see if you can figure out what is causing him to react in this manner.

You Need To Pay Attention!

Pay close attention to what he is doing when he is howling. Is he panting? Is he raising his head off the pillow? Is he making other strange movements such as “cycling” his legs in the air?

These will give you some clues about his emotional state (whether he is stressed, happy or nervous) in his sleep.

I would say that you don’t have to be extremely worried if he is moving and acting normally once he is awake from the sleep.

This could likely be the cause of some unpleasant dreams, and you just have to work on making him calm down and have a nice and peaceful sleep.

Bad Experience During The Day

Your dog is having a nightmare, and he is reacting to it with his animal instincts.

This can happen for various reasons, such as having a bad experience with another dog during the day, or suffering from a fright after watching a scary show.

What you can do is to wake him up and comfort him. Just be with him in his moment of panic.

He will get over it soon, and, in the meantime, you may want to turn on some soothing music or radio (not too loud) to help take his mind off his fright before you put him back to sleep.

Try to make all of his “awakenings” a positive experience!

Prevent playing any show that is too frightening for him and keep him away from any aggressive dog that is going to make him stressed or fearful.

I would suggest that you get him some puzzles or other mentally stimulating games to keep him occupied.

Puzzle feeders are an excellent choice, and they come in many styles and sizes and all of them have a way of keeping the game interesting for your dog and making him mentally tired.

Another thing you can do is give him some simple tasks to do every day. This will make your dog use up his energy so that he can get a sound sleep in the night.

Some simple tasks that your dog can perform include retrieving items such as newspapers and clothing, opening and closing doors and drawers, turning on and off the lights etc

Make sure that the tasks you are assigning to your dog are achievable, as you would not want to stress him out with these tasks.

Remember: Your dog is an animal and, just like all other animals, he does not have the same ability to cope with stress as you do.

Exciting Day For Him

Your dog could be having an exciting day chasing after squirrels or cats and that makes him excited even in his sleep.

He is still dreaming that he is still out there doing what he loves and that makes him feel good. His howling reflects his joyful contentment.

So be mindful of the “exciting” things that he is doing when he is awake. This can potentially have a “negative” effect on his sleeping pattern.

You can plan for games that are less likely to make him excited, such as playing a game of fetch with a ball instead of him chasing after squirrels or cats.

Do what you can to have him keep his focus on you rather than other exciting stimuli.

Also, get him some toys so that he can keep himself busy with the chewing.

Go for toys that don’t squeak or yelp when they are chewed upon and make sure that they are durable, have simple design, and do not contain any small parts that you dog could potentially swallow during the chewing.

By keeping your dog’s excitement level in check, and provide an outlet for him to let of his energy, that will help to tire him out, and he will be ready for a long, peaceful night of sleep.

He Is Dreaming About You (Separation Anxiety)

Your dog is dreaming about YOU!

If this is true, it is probably because he is very much in love with you and wants to tell you how he feels.

This can happen for various reasons, such as when he is lonely, misses you or needs reassurance that you still care for him.

What you should do is to spend more time with your dog during the day and ease his anxiety.

You can plan for some interactive games such as hide-and-seek, fetch, or tug-of-war.

This will not only help to release his excessive energy so that he will get tired and have a good night’s sleep and will also help to build up his trust and bond with you.

In fact, nothing is better for your relationship with your dog than spending more time together. So, do not underestimate the power of positive attention!

In addition to this, you should also make sure that your home is a safe and secure place for him. This will help to make him feel relaxed and calm down, preparing his body for a good rest.

I would suggest that you put him in a crate if he is already crate trained.

Crate offers your dog the feeling of being in his own little “fortress” and it will give him more peace of mind.

Also, keep all of his favorite toys, beds, blankets, and chewed items in the crate with him, so he will be less likely to feel lonely or abandoned.

Loss Of A Companion

Your dog is reacting to something that is upsetting him. Maybe he is missing his old owner or the loss of his companion.

If you have another dog that used to be his buddy and has left your home, he is likely going to feel depressed and will be searching for someone or something to connect with on a deep emotional level.

It may take him some time, but, once he finds that “connection”, he will be back to his old shelf.

What you should do is to give him lots of love and attention during this period.

Play with him, take him on walks, feed him treats and praise him when he does something good. He will quickly learn to depend on you and will start to feel safe and secure.

This is the time when you need to be there for him the most. He will be very vulnerable at this stage and any kind of negative interaction or event can have a devastating effect on his emotions.

Alternatively, you can get him another “buddy”, preferably of the same breed, so that he can at least have someone to “play” with and keep him company.

That way, they can have some fun together and that will keep his mind off any unpleasant thoughts.

A new puppy will keep your dog’s mind occupied and will also provide him with a lot of much needed “doggie cheer”.

You know, a dog’s life can get pretty bleak sometimes… especially when he has just lost a companion.

He will still be very much affected by the loss of his “buddy” and may continue to experience occasional bad days.

Just give him time to heal and remember that it is normal for a dog to grieve a loss like this and to go through a period of emotional upheaval.

When your dog is feeling discomfort (due to some medical conditions), he might start howling in his sleep.

You may be able to tell this by his breathing rate and rhythm, whether it is shallow or not.

If his breath is shallow, that means that there is something obstructing his airway. Perhaps a grass thorn got into his throat while he was running around outside.

Other health conditions such as canine cognitive dysfunction, kidney disease or bladder infection can cause your dog much discomfort, and he tries to communicate with you through his howls.

If this is the case, you should check with your vet to find out what is wrong with your dog and take appropriate action.