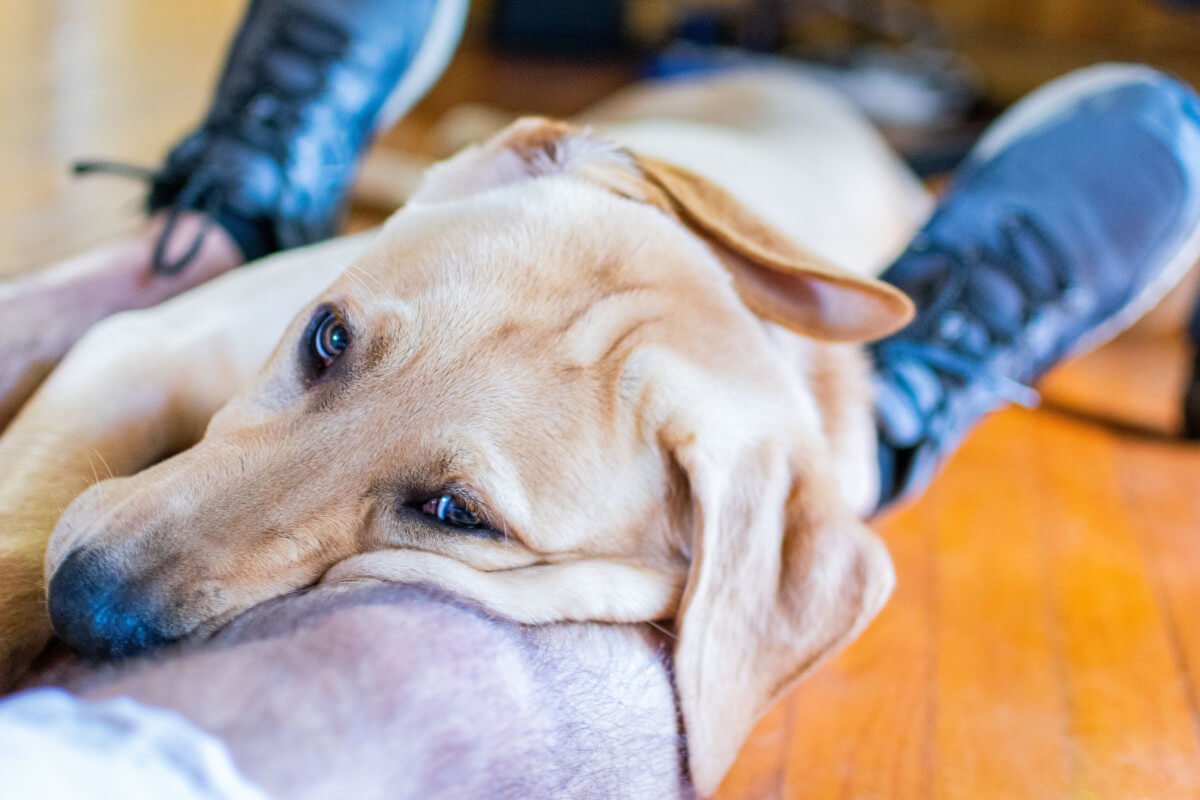 It might be hard to tell the difference, so if you are at all uncertain about the cause of your dog’s behavior, this post will shed some light for you.

When your dog lays at your feet, he does it for reasons such as marking his territory, showing you his submission, getting some warmth from you (he is feeling cold), trying to protect you, getting your attention, seeking your protection, showing his dominance over you or suffering from separation anxiety.

If your dog is sitting on your feet for an extended period of time (more than just a few minutes), it could be a warning sign.

This usually means your dog is marking his territory, and he is uncomfortable with you being in his space.

He is trying to tell you that you should get yourself away from his space.

In this case, you could gently pat him lightly (with a newspaper or a soft object) and tell him to “go play” or you can simply pick him up and carry him to another area or his crate where he will feel comfortable.

Don’t worry. You didn’t do anything wrong! You are just letting your dog know that his territory behavior is not acceptable.

Remember not to scold or punish him for this behavior, as you would not want to create a situation where he starts snarling, biting or lunging at you because of fear or aggression.

However, if you do nothing and continue to allow your dog to sit on your feet (even if it’s only occasionally), you are inadvertently teaching him that it’s okay for him to mark his territory (which is your feet!).

It’s a sign of submission for your dog to sit on your feet. He is showing his affection for you, and is happy that you’re his owner.

You could also find him sleeping with his bum facing you.

This is his way of showing his respect and submission to you as well.

You should then show your affection back to him by scratching behind his ears and rubbing his belly.

Stroke him gently and tell him how handsome he is. This is a great way to strengthen the bond between you and your dog.

And guess what? That little display of affection will make him much more likely to do whatever you ask him to do!

Remember to praise him enthusiastically whenever he does something right.

Give him an excited “Yes!” every time he does something you like. Even a simple “Good boy!” will make him feel important.

The more you use this type of positive reinforcement, the more he will respond to it.

When you give him a treat because he did something good, it will be like winning a reward for being a good boy.

He Is Feeling Cold

The reason your dog lies on your feet is that he is feeling cold and tries to get warmth from you so that he can maintain a regular body temperature.

This is a very natural thing for him to do, and it is NOT a sign of illness. You will find him doing this action more often when the weather gets cold.

Just like us, dogs have a core body temperature (101.0 to 102.5 °F) and if their body temperature starts to drop below normal, their central nervous system will send out signals which cause them to seek out and absorb as much heat as they can from their surroundings to keep them warm.

It is very important for your dog’s health that his body temperature stays at an optimal level. If it starts to drop too low, your dog will begin to shiver, which can lead to discomfort or even death.

So the first thing you should do is to wrap your dog up in a warm blanket and try to get him to lie down somewhere warm and comfy where he will not have to move around much. Also, make sure he has access to plenty of clean fresh water.

BUT if you notice that your dog is shivering a lot more than usual even though it is not particularly cold, this could be a sign that your dog is suffering from hypothermia and needs some urgent medical attention.

It is important that you pay extra attention to your dog during the winter months.

Trying to Protect You From Harm

Whenever your dog sits on your feet, he’s doing so to protect you. You might have a new pet or a new family member in your home, and he is feeling the need to keep an eye on things.

He’s sitting on your feet to let you know he’s got eyes on everything that comes near you, and you are safe under his protection.

You see, dogs are pack animals. They are social creatures. When one of them sees a member of his pack in danger, he will instinctively try to protect him.

And often, this instinct causes your dog to pay too much attention to whatever sets off his warning signal.

That’s why it is so important to always understand your dog’s signals. If you don’t, you may end up with an overprotective canine.

Trying To Get Your Attention

Often, dogs will sit on the owner’s feet and stare at them with those lonely eyes of theirs to try and catch their attention.

Don’t make the mistake of thinking it’s cute. It’s a sign your dog is seriously disturbed and needs your attention.

Spend more time with him by taking walks, running errands together or just hanging out in the backyard playing with him.

You can play some interactive games such as tug-of-war or hide-and-seek with your dog. These will help him burn off his excessive energy and also give you a chance to “interact” with him and build his trust and bond.

Personally, I like to play “hunt treasure” with my dog. It’s easy!

All you have to do is…

1. Take some things that your dog is familiar with, such as hollow bones, and hide them in a place where your dog is likely to find them.

2. Tell him to “find the bones” and watch him run around searching for them.

3. Praise him for finding the bone and hand him a reward (his favorite treat).

4. Repeat steps 1-3 several times until your dog is physically tired.

This game not only helps him to release his pent-up energy but also makes him use his brain power (mental simulation) to search for treasure.

Allocating some quality time with your dog will make him feel at ease. If your dog senses that you don’t care for him, he will feel very insecure.

Insecurity breeds fear and fear breeds panic.Don’t let this happen to your dog!

This usually happens when your dog is startled or frightened by some events or happening, and he feels that he needs your protection.

Do not react angrily to him. Instead, reassure him by petting him gently and say to him in a calm tone – “It’s all right, Buddy. I’m here, and I will protect you!”. Let him feel your calm energy.

He is likely to react in a fear or anxiety state when he is startled by an unfamiliar face in your home or a loud noise such as fireworks or a thunderstorm.

If your dog is prone to such behavior, you should train him not to be afraid of these things by gradually exposing him to these “stimuli”.

When your dog is suffering from separation anxiety, he would like to be with you all the time and would “glue” to you wherever you go.

So, by sitting on your feet, he reassures himself that you are there with him.

It’s not a big deal but if this behavior continues long enough, your dog may have OCD (obsessive compulsive disorder).

To address this, you would need to work on correcting his separation anxiety behavior.

There are many simple actions you can do to help your pet feel less anxious when he is separated from you.

Gradual separation, in which you slowly increase the time that you’re away during the day, can help your dog adjust to longer periods of time alone.

Having your dog engaging in sufficient physical and mental simulation can help to discourage your pet from engaging in destructive behaviors while you’re not with him.

Providing him with his favorite toy to keep him occupied would also be helpful.

A word of caution: Don’t make the mistake of thinking that, because your dog is getting used to being alone, that he won’t experience any anxiety when you are away for a long period of time.

You see, dogs don’t have the luxury of rational thought when it comes to their emotions. Just because your dog doesn’t seem anxious now, doesn’t mean he won’t suddenly become anxious later on.

Be careful not to give him any “clues” that you are going to leave him alone for a long period of time. This can cause him to start worrying and create unnecessary anxiety.

Exhibiting His Dominance Over You

By sitting on your feet, your dog will feel that he is “higher” and you are “lower”, giving him the “Alpha” status that he wants.

He will feel as if he is the dominant one, and you are his pack member.

What you should do is simply stand up and move away from him. Give him an order like “Heel!”

If he starts to follow you, tell him “No!” in a firm, calm voice and move away from him again.

You would also need to re-establish your position as the leader of the pack: Set him up for success.

Re-establish yourself as the leader by giving him tasks to do.

Have your dog do things that will put him in a position to succeed, such as fetching sticks, balls, or bones. This establishes you as the leader and gives him the ability to obey your commands.

If he is moving around, make him sit or lie down before you give him his meal. Praise him and lavish attention on him for doing what you asked.

In this way, he will learn to obey your instructions and acknowledge you as his Alpha.