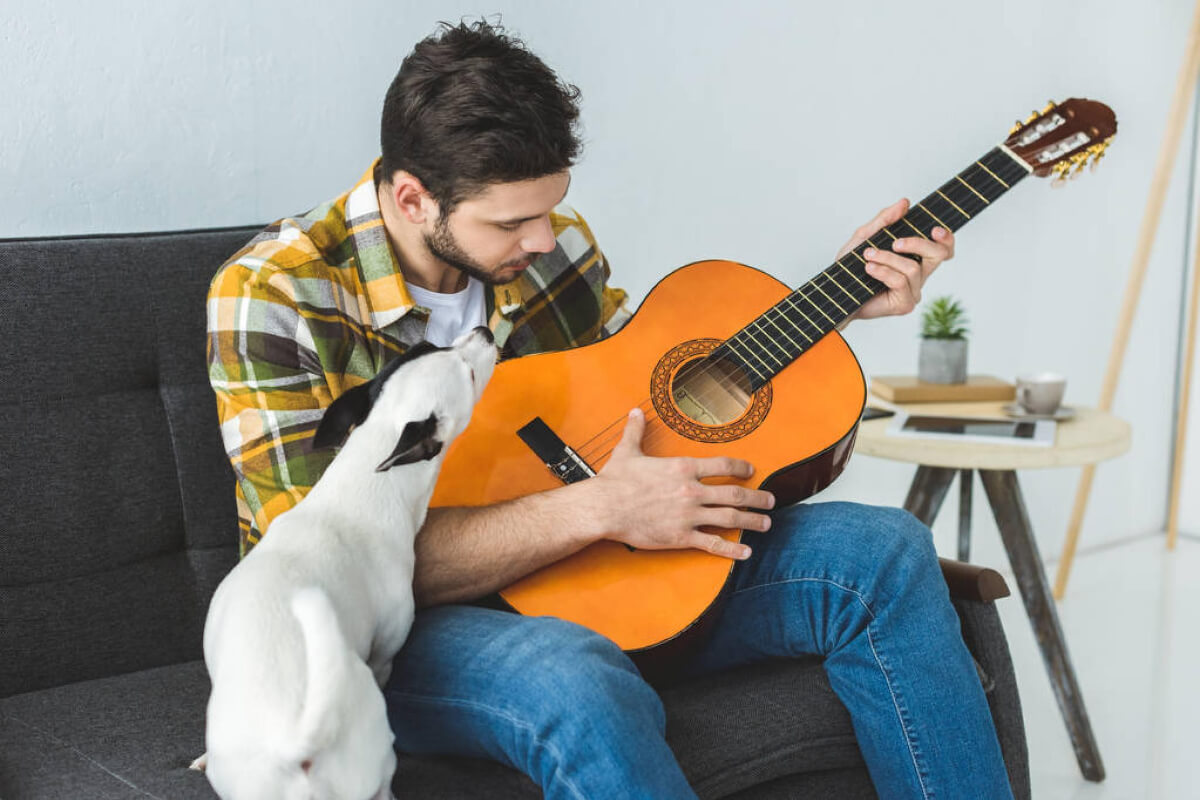 You like to listen to music while doing things around the house, but as you turn on the player, your dog keeps making his howls.

You are astonished by his act and wonder why he is reacting this way?

Your dog is howling to music because he wants to join in the fun. He perceives music as a way of howling, and he is replying to that. High-pitched music is annoying him, and he is howling to exhibit his frustration. Heavy metal music makes him nervous, and he howls for help. You had made it a rewarding experience for him.

It’s His Way Of Joining The Fun

Your dog certainly wants to get involved in whatever activities you are doing.

As soon as he hears you playing a musical instrument or singing along to a song, he will want to join you in the fun.

And the way he will do it is through his howling.

He will use his “voice” in different notes, tones, pitches and tempos to express his joy and enthusiasm and to share in your enjoyment.

You will also see him in a relaxed posture with floppy ears and a high and wagging tail.

He Perceives Music As A Form Of Howling

Do you observe this phenomenon that whenever a dog starts to howl, dogs nearby will also join in with their howling.

This is how dogs do their communication and is passed down from their ancestor, the wolf.

Though they are now mostly domestic dogs, this genetic code never goes away.

So, when your dog hears “music” that he perceives to be the same as his howling, he will start his howling as a way to let his pack members know his whereabouts.

It’s more like he is saying “I’m right here!” as a response to the howling (in this case, it would be the music) he had heard.

Of course, there will be certain breeds of dogs that tend to howl more often than others.

Breeds such as Alaskan Malamute, American Foxhound, Basset Hound, Beagle and Bloodhound are known for their howling behavior.

If your dog belongs to one of these breeds, he may have a tendency to howl regularly as part of his natural behavior.

You can consider looking into training programs that can help him to control this undesirable behavior.

As you probably know, dogs possess extremely sensitive hearing senses, and they can hear sounds that we cannot perceive.

When the sound frequency reaches 20,000 Hz, your dog’s ears will start to feel discomfort. And when it reaches the mark of 25,000 Hz, your dog will show his frustration and anger as it starts to irritate his hearing.

So if the music that you are playing is at a frequency that is more than 20,000 Hz, it is no wonder why your dog would react negatively to it.

He will exhibit his frustration through his howling!

Deafening Sound From Music Frighten Him

Studies have shown that dogs will exhibit anxiety-inducing behaviors when they are exposed to heavy metal music.

So, if you are playing some heavy metal music at a deafening sound, that might trigger your dog to howl as he feels threatened.

Howling is his way of trying to get help from his pack members, just like what wild dogs would do in the olden days when they needed assistance.

He wants to make sure that he has all the attention from the pack members that can be given.

This is why you should avoid playing heavy metal music since this may cause your dog to act abnormally.

Go for classical music as it is known to provide relaxing sounds and give your dog that calming effect. Always keep the volume to an acceptable level.

Keep in mind that your dog may be sensitive to loud sounds, especially if they are sudden and sharp, so avoid music that could provoke his unease.

He Had Associated Music With Loneliness

Did you often play music for your dog to listen to (to capture his attention) so that you could be out of the house to do your groceries?

Your dog has learned that small “trick” of yours!

He knows that whenever he starts to hear music, you will be out of his sight for ages.

Considering that an hour of yours is equivalent to 7 hours for your dog, if you are away from him (even for merely 2 hours), it could be a long day for him.

He had associated hearing music with an unpleasant experience (being alone again) and would react with anxiety.

That explains why he howls or whines as if he is protesting about being left alone again.

He is reacting this way just to get your attention and prevent you from leaving him.

A Rewarding Experience For Him

Dogs like to do things that please their owners. This is particularly so if they have been positively reinforced by their owners for performing the acts or behaviors.

The reinforcement (can be in the form of treats, praise or petting) makes them associate these acts with rewarding experience and that will encourage them to do these acts again and again.

They want their rewards and, at the same time, to please their masters.

So, if you have been praising your dog when he is howling to music, he will learn that this is the behavior that you like and that will keep him doing it again and again.

This is the WRONG reinforcement that you ought to stop doing.

Remember, you should only reward your dog for the desirable behaviors that you want him to do and not the other way round.