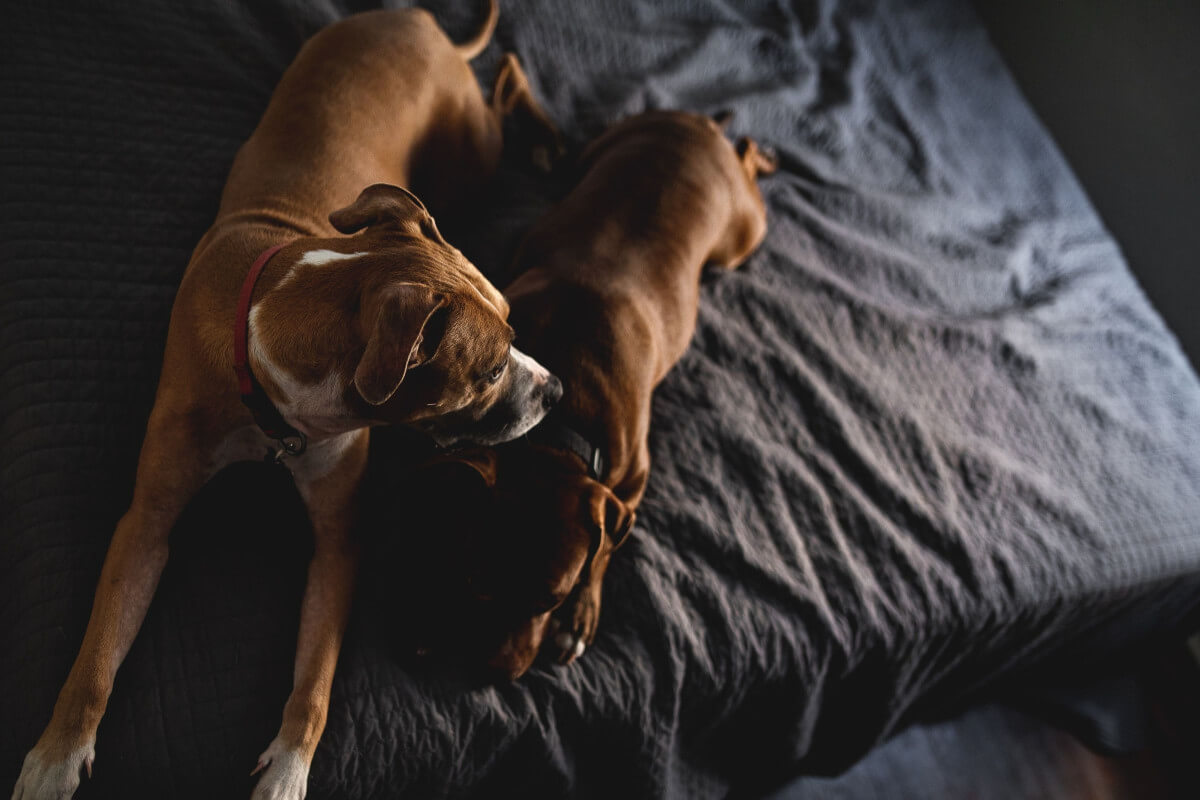 You have got a new puppy and your residence dog seems to love sniffing him, and you may be wondering what could be the reasons behind this?

If your dog keeps sniffing your new puppy, he could be attracted to his “Puppy Breath” or as a form of greeting and communication. He could be trying to find out if they had met before or to investigate who is more dominant. This could also be a way to calm him down because sniffing helps diffuse his anxiety.

“Puppy Breath” That Attracts Your Dog

Puppy odors are distinctively irresistible, and it is quite possible that your puppy has THAT odor which makes your dog excited and gets attracted to him.

It is then that he will begin drooling and smelling the puppy. This “sweet smelling breath” is an innate part of being a puppy.

The smell is the result of the change in breath odor that is caused by his teething, (gastrointestinal) tract and bacteria that are present in his body.

Fortunately, this “puppy odor”, which is also known as “Puppy Breath”, is not something that will last forever. In fact, it only lasts for about the first 4 months of your puppy’s life.

After that, your puppy will not have that odor anymore and your dog will probably be no longer interested in him.

His Way Of Greeting Your Puppy

Unlike humans where we use hand shaking and hugging as a form of greeting, dogs don’t do that. They instead use their sense of smell to communicate with each other.

That is why you would often see your dog walking in a circle and keep smelling the new puppy during his first few days of “getting to know” him.

Through smelling, he will gather lots of information such as the gender of the puppy, how old he is, is he foe or friend, and even the health of the puppy.

This allows him to make an intelligent decision on how to react to the puppy. It’s only natural for your dog to want to get to know his new partner!

If he doesn’t like what he smells, he will keep his distance from the puppy.

If he likes what he smells, he will come closer and investigate further.

If he is unsure, he will just keep a safe distance and observe before making his next move.

So it is important that you keep a lookout for his body language.

If he is exhibiting aggressiveness, he will move his tail to a vertical position and arch back.

If his tail is held low and tucked tightly between his rear legs, then he is showing his fear.

When his tail is in a straight out horizontal position, he is exhibiting his curiosity.

Of course, the most preferred emotion would be happiness, where his tail will be in a neutral position and wagging his tail freely.

In any case, he will definitely give your puppy a sniff and then decide the next course of action!

You see, dogs are more “visual” animals and will express their feelings and intentions through their body language and their sense of smell.

So it’s important that you pay close attention to his body language during his initial “engaging” period with his new buddy and know how to interpret his “signal”.

If you don’t, there is a chance that you might misinterpret his actions wrongly and think that he is aggressive or scared of the puppy when he is not.

For example, if you think your dog is aggressive when he isn’t, you may decide to get rid of the puppy because you are afraid he will hurt the pup but in actual fact, he is just “playing” with him.

To Find Out If They Had Met Before

Dogs will smell the other dog’s rear as a way to find out if they have met before.

This allows them to know who is the alpha in the pack and also to establish friendly relations with them.

So when your dog is sniffing your puppy’s rear, don’t be too surprised as he is relying on the unique odor to establish some kind of relationship with him.

In fact, it is very important for your dog to establish a relationship with your pup because this will help him to feel secure and have a better understanding of his place in the pack.

You see, when two dogs meet for the first time, if one of them is dominant over the other, the submissive one will back down or run away from the dominant one.

But if both dogs are friendly towards each other, they will start sniffing each other and eventually play together.

This is how two dogs get to know each other and also find out who is the alpha in their packs.

It is very important for you as a puppy raiser to let your puppy play with your dog.

This will help him to understand the nature of the dog’s world and build up his confidence.

To Find Out Who Is More Dominant

Dogs, as we all know, are very curious. They will investigate just about anything that doesn’t seem dangerous to them.

And so, what happens when you bring a new puppy back home?  Chances are, your dog will at least “sniff” him out.

As a resident dog, he was wondering if this puppy was going to be a threat to him?  Is he a friend or a foe? Is he going to “replace” his alpha position in the pack?

He will start sniffing first as a way to show his dominance and expect the puppy to back down immediately.

This is his way of setting the foundation for a dominant-submissive relationship between the two of them.

But what if your puppy doesn’t back down? What if he starts to growl or snap at your dog?

You know that he doesn’t stand a chance to “win” your dog!

What should you do then?

You give your dog a firm and calm tone, “No Sniffing!” and reward him when he backs off.

You should also establish yourself as pack leader so that both your dog and puppy know that in this house, you are the alpha for them, and they are to be submissive.

Never let your guard down when you have 2 or more dogs in the house. It only takes one determined member of the pack to make a play for dominance, and you could lose control.

As A Way To Calm Him Down

Sniffing provides a calming effect for dogs because it’s soothing to their olfactory nerves.

You see, the act of sniffing helps diffuse their emotional energies, calming them down and allowing them to let off their pent-up energies.

Of course, if you find your dog does a lot of sniffing and also exhibits signs of anxiety such as panting, pacing, shivering, whining or hiding under furniture, then you should take a look at the possible causes of his behavior and deal with his anxiety issues.

In this case, you should work on addressing his anxiety issue by providing him with a safe and secure environment where he feels confident and at ease.

Providing him with a crate will be an option that you can consider.

Crate is like a “comfort zone” for your dog. It provides him security and a familiar place to retreat to when he feels anxious or uncomfortable. But make sure you get one that is big enough for him to turn around and stay comfortable in.

It is a good idea to equip it with some toys, so he has something to keep him busy while he is in there.

You can also try putting on some classical music or a natural recording. The point is to create a comfortable and safe haven for him when he needs one.

Remember, your dog will never tell you when he is feeling anxious or insecure. So, the best way to address this is by watching his behavior and body language.