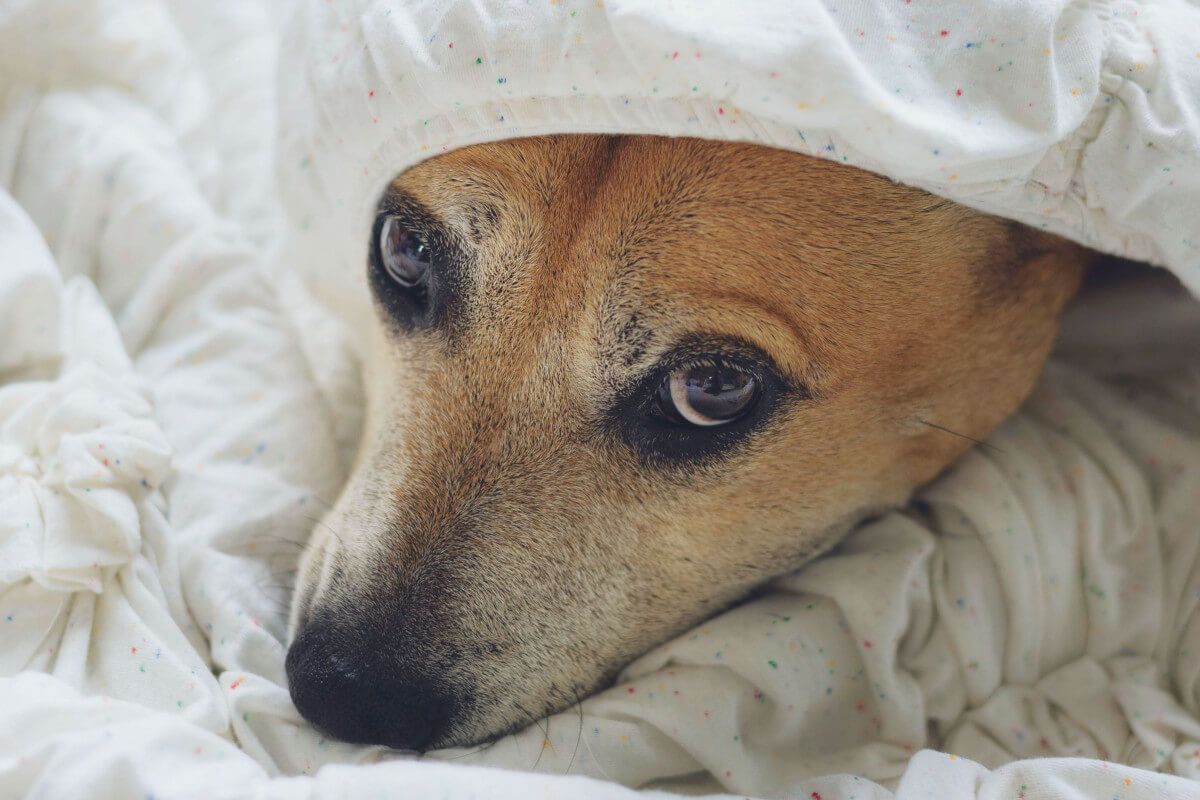 Do you wake up to find your bedding being scratched by your dog and wondering why he is doing so?

Did he do that just to get your attention or is there more to that?

Let’s find out the hidden reasons for his scratching behavior.

Your dog will scratch on your bedding for various reasons, such as investigating the food scent from the bedding, making his nest, seeking warmth, marking his territory, hunting insects found on the bedding, relieving his boredom, alleviating his itchiness, a bad behavior he had picked up or just a maternal behavior.

Food Scent From Your Bedding Attract Him

Do you have the habit of eating food in your bed?

The aroma of the food residue that you have left on your bedding could have attracted your dog.

He will probably think that there is food “hiding” in your bedsheets and that will make him curious and start scratching the bedding looking for it.

So make it a habit not to bring any food to your bed and to have your bedding washed regularly.

Making A Nest For Himself

It is common to see your dog digging a hole in the garden to prepare for a good spot to rest when you let him out for a play.

That is a natural instinct for dogs to survive in the wild when the weather gets too hot or cold.

They will dig to search for a comfort spot for them to “take cover” either from the changes in weather conditions or from their predators.

This is what your dog is doing on your bedsheets. He is scratching to make a nest for himself.

Seeking Warmth From Your Bedding

Your dog is trying to get to the underneath of the bedsheets by scratching on them as he believes that would get him more warmth.

This is based on the belief that he had when he was digging a hole in the garden for his resting spot.

The deeper he digs, the cooler the spot.

Your dog will scratch your bedsheets as a way to mark his territory.

This could be the case when you have another pet on your bed and your dog senses his smell on the bedding and will try to mark it and claim his space.

It is advised to keep your dog away from your bed by installing a baby gate to prevent him from entering the room or to wipe down the bedding using a deodorizer that your dog hates.

You should also work on correcting his possessive behavior.

He Is Hunting Down His “Prey”

Your dog has seen insects such as lizards or cockroaches running around your bedding, and he is trying to get hold of them.

He will scratch the bedding in an attempt to get them out of the bedsheets.

If your dog belongs to hunting breeds such as Beagle, Golden Retriever or Jack Russell Terrier, you will find him more likely to perform this “hunting” behavior as it is a natural instinct that is inherited from his ancestors.

It is important that you understand your dog’s behavior so that you can take action to stop him from continuing this “hunt”.

He Is Trying to Relieve His Boredom

When your dog is feeling bored, he is likely to do something destructive.

For instance, your dog might scratch your bedsheets or start chewing on your furniture or even his own crate!

So make sure that you have plans for some activities to keep him busy and help him release his energy.

Physical games such as fetching, tug-of-war, playing hide-and-seek or chasing after bubbles are great ways to help your dog let off his excessive energy.

As the saying goes, “A tired dog is a good dog” and this statement certainly holds!

Also, get him some chewing toys or bones that he can get his mouth on whenever he feels bored.

Your dog feels discomfort (itchiness) when he sits on your bedding and that makes him scratch his coat and your bedsheets as an attempt to ease his itchiness.

This can possibly be caused by bedbugs or an allergic reaction to the material of your bedding or the detergent that you have used to wash your bedsheets.

In fact, it is not a good idea to allow your dog to sit in your bed as that might cause his dominance behavior.

You see, when you are at the same “level” as your dog in the bed, he will not see you as his alpha and will want to establish his position of dominance in the house.

This may result in his dominant behavior down the road.

A Behavior That He Had Picked Up

Dogs have a special connection to each other.

They learn from each other and exchange behaviors, sometimes even starting a whole new behavior themselves.

You can observe this phenomenon at the dog park.

When one dog starts the scratching behavior, the other will follow.

So, if your dog had seen your other pet scratching on your bedding, he would start doing it too.

Maternal Behavior (If you have a female dog)

During pregnancy, your dogs’ protective instinct is kicked into high gear, and she is probably preparing an area for her babies to stay in that is safe and secure.

She will feel that having a nest that is close to you will be the best choice as you will protect her and her babies because you are her Alpha.

She will start preparing her nest (by scratching your bedding) for her babies.