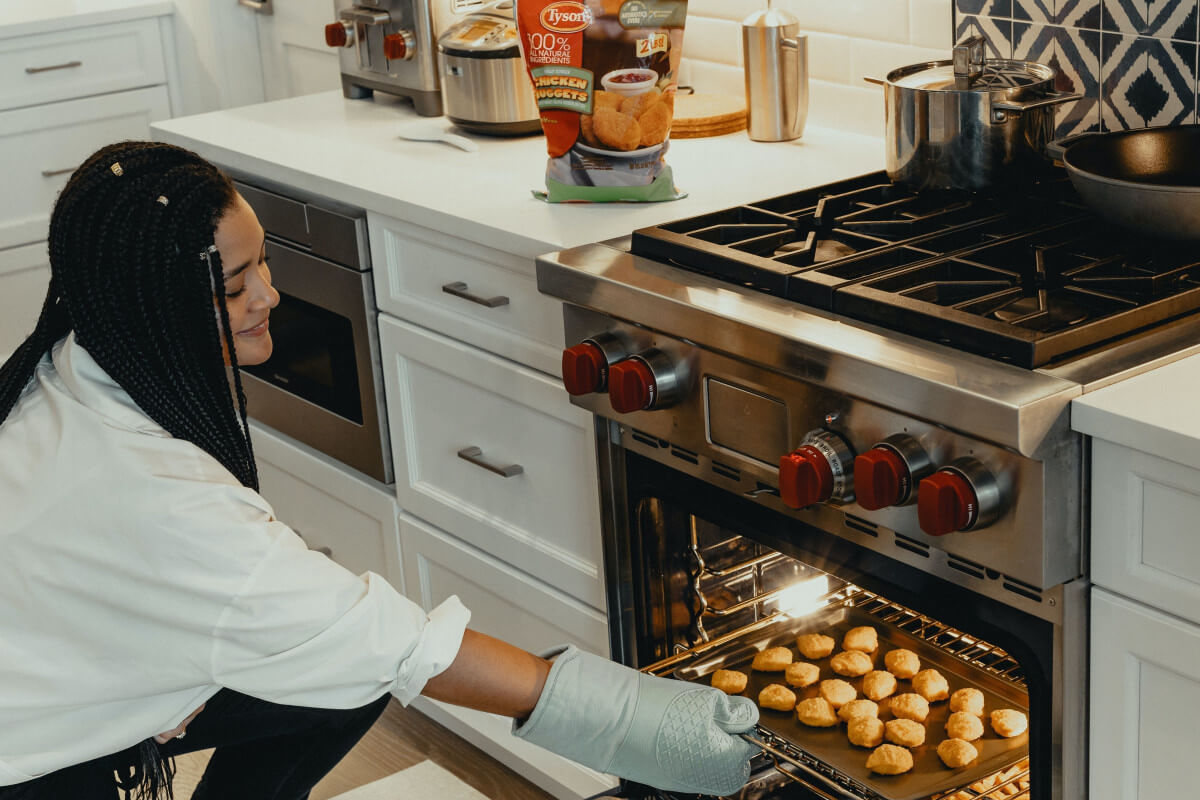 It’s meal time and your dog is happily following you to get the frozen chicken meat from the fridge. However, the moment you go over to the oven to have the meat heated up, you find him hiding in one corner of the kitchen, shivering with fear.

This makes you wonder what’s causing his fear of the oven?

Bright Lights In The Oven Frightened Him

Your dog sees a sudden light in the oven during the heating process and that terrifies him.

He is unsure what that lighting is all about and if there will be any threat to him.

The light looks like a “fire” to him and, along with the heat that is emitting from the oven, he may think that it is a fire breakout.

That’s certainly going to make him flee away!

Smell Resides In The Oven Freak Him Out

If you are using the oven to bake a marinaded ground spiced chicken, the odor that is left in the oven is going to make your dog stay far away from it.

This is because there are certain scents, such as the ones from ground spices, hot peppers, fresh herbs as well as citrus fruits that dogs typically dislike because they irritate their sense of smell.

It could also be the case that the burning smell of your food turns him off.

In fact, any burning smell never fails to make the dog jump out of his skin. It’s their instinctual behavior!

Noises From The Oven During Heating Scared him

When the oven is heating up, sudden booming sounds can be heard because the igniters are dirty.

The igniter that is supposed to heat up and light the gas is accumulated with grease and food residue over time.

When the element needs to heat through the dirt and filth to ignite the gas, this can lead to that freaky popping sound.

This scary loud noise from the oven, which is similar to the noise of a gunshot or fireworks, can freak your dog out and cause him to panic. He will run away from the oven and hide in one corner of the house.

Heat From The Oven Startles Him

That intense heat generated by the oven can be terrifying to your dog when he is in proximity to an open oven (when you are bringing out the food).

He could feel the heat and started to feel uncomfortable. If he happens to touch the door of an opened oven, that could cause a burn on his paws.

So you need to keep an eye on your dog when you are cooking or baking. You want him to enjoy the food that you are making, and not to get hurt.

That’s why you need to make sure that he doesn’t go near the oven when he smells the aroma of the food in the oven.

You can do so by setting up a baby gate to keep your dog away from the kitchen.

He Is Traumatized By Painful Burning Experience

If your dog ever gets burned as the result of touching the oven, that will create a long-lasting fear for him.

The burn on his paws can take weeks to heal up completely, and he will have difficulty walking. He might not be able to go anywhere without being in pain.

This will create immense discomfort for him whenever his injured paw touches the ground.

That will make him start to associate the oven with an unpleasant, painful experience and will create a phobia in him towards the oven.

Appearance Of The Oven Stunned Him

If your dog has a tendency to be fearful of cardboard boxes, he might be scared of the oven as well because it resembles an enclosed box to him.

He sees the oven as a potential risk of danger, that is, he could be trapped inside if he sticks his head in it (assuming your dog is a small breed such as a chihuahua).

That makes him wary of the oven and afraid to go near it. He needs to be desensitized to the oven through training.

Radiation From The Oven Terrify Him

According to Federal law (21 CFR 1030.10), an oven may leak up to 5 milliwatts (mW) of microwave radiation per square centimeter at a distance of approximately 2 inches from the surface.

This limit is well below the level at which human beings are known to be harmed.

Thus, you might not feel the radiation emitted from the oven, but your dog is certainly able to sense it and this scares him.