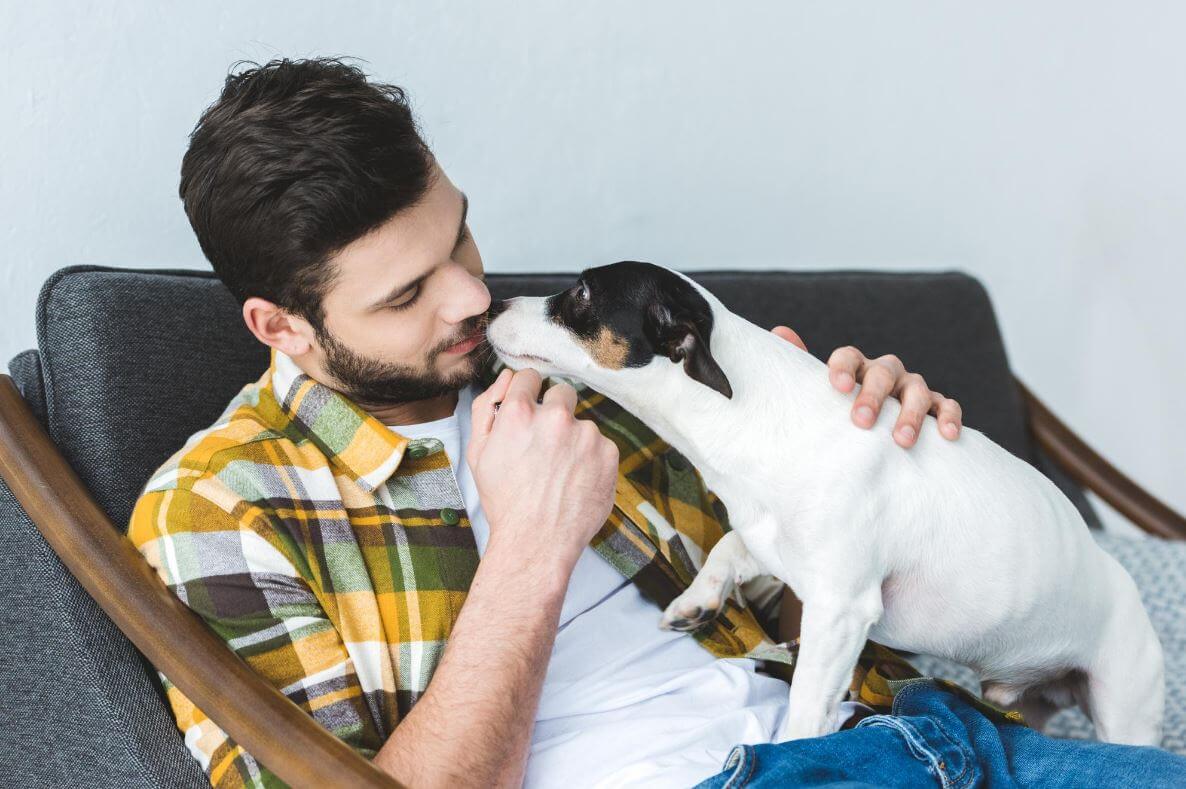 Your dog may like to nibble on your ears for various reasons. It could be that he is expressing his love for you, showing his excitement, boredom, doing it out of reward for your attention, teething or simply like the taste of your ears. It could also be due to a strange odor emanating from your ears that triggers his curiosity.

Boredom Has Taken Over His Mind

A bored dog is a restless dog. In such a case, he might be looking for a way to amuse himself and nothing beats getting your attention to play with him.

If you have not been spending much time with your dog, he will naturally want to make sure that you are aware of his presence.

And the way to do this will be to push his head on you, mouthing your hand and nibbling your ears. This is his way of saying “Hey, look at me and play with me!”

In such a situation, you should plan for adequate physical exercise and mental simulation games to keep your dog both physically and mentally simulated.

Games such as fetch, tug of war, flying disc are great exercises to help your dog release his pent-up energy and keep his energy in check.

You may also want to consider teaching him some new tricks or making him perform some obedience commands to keep him mentally simulated.

Taking him out for a walk daily in a dog park is certainly a good move as that will stimulate him mentally and physically as he gets to enjoy the scenery, smell the grasses and trees and interact with other pets.

You can also use this time to bond with your dog and make him trust you even more.

Exercise is a great way to keep your dog healthy and happy. It’s also a great way to strengthen your bond with him but be careful not to overexert him.

The amount of exercise a dog needs varies from one dog to another. This largely depends on their breed, ages, lifestyles and health status.

It Was A Behavior That You Had Encouraged Him

It’s possible that your dog has been taught that nibbling your ear is a rewarding experience.

If you have been rewarding your dog for nibbling on your ear, he will start to see it as a positive experience and will want to repeat the behavior.

This is especially so if you have been rewarding your dog with your attention and affection when he does that act in his puppyhood.

This makes him associate nibbling your ears with a rewarding experience and will continue to behave in that way even when he grows up.

To correct this behavior, you should give a loud yell when he nibbles on your ears. This will startle him and make him stop the act.

The idea is to make him associate that “nibbling” with a frightening experience and that will deter him from repeating that behavior again.

He Detects a Foul Odor Emanating from Your Ears

As you know, dogs possess an acute sense of smell and are able to detect any slightest odor that is not being picked up by our nose.

If there is an abnormal foul smell coming from your ears, it is a natural instinct for your dog to carry out his investigation to find out the source.

And the fact that the scent is something that he had never smelled before further triggers his curiosity and will nibble on your ears to get a better clue.

There’s a possibility that there is some sort of infection in your ears that causes the foul smell that is picked up by your dog.

It could also be the case that there is excessive ear wax in your ear canal that is causing the foul smell and your dog is doing you a service to remove them from your ears.

And of course, he will do it through nibbling and licking your ears.

Therefore, do not overlook the fact that there could be some medical health reasons that make your dog react abnormally to your body.

This can include his persistent licking inside your nose. He could have smelled “bleeding” in your nostrils and is telling you to be on the lookout for your health.

There Is a Feeling of Nervousness or Excitement in Him

Chewing, nibbling and licking are common behaviors in dogs when they are feeling nervous or excited. It is a natural response to help them calm down by reducing the tension of their body.

Through chewing, a dog is able to calm and comfort himself by activating the adrenal-pituitary axis in the brain, triggering the release of endorphins.

An endorphin is a natural chemical produced by the body in response to pain or stress. The chemical is often called a “feel-good” chemical because it alleviates pain and boosts happiness.

If you notice that your dog is nibbling on his paws or mouthing your body (such as your legs, arms and even your ears), it is a sign that he is stressed.

Watch out for other stress indicators such as the appearance of white in his eyes, tucking his ears and tails, raising his hackles, excessive lip licking, yawning, and panting. Your dog may also turn away from you or avert your gaze.

In the case that you have recently moved to a new house, your dog may be feeling anxious as he is still trying to adapt to his new environment and will start acting strangely.

In this case, try to offer him extra attention and give him a pet whenever possible.

Petting will also help to release endorphins in your dog’s brain and help him calm down. If your dog is mouthing on you, distract him with his favorite toys, treats, or something that will get his attention.

If you have not started him on crate training, you should do so as it will provide him with a safe “haven” to retract to (once he sees the crate as his den) whenever he feels nervous or anxious.

Get him a crate that has a window that he can view through if he is having anxiety disorder. He will feel less anxious knowing that he is not being abandoned.

In this case, a wire crate will be ideal since it will allow him to see you easily through the “open view” design.

He Enjoys the Taste and Smell of Your Ears

Some dogs really enjoy the taste and smell of their owners’ ears, and will go to great lengths to nibble on them.

Generally, this occurs to dogs that have been rescued and have had little experience around people. Dogs who spend a lot of time around people usually do not exhibit this behavior.

Therefore, if you have just adopted your dog from a rescue home, that could be the reason why you are seeing this behavior.

Dogs may also be attracted to the smell of their owners’ bodies, particularly if they have applied perfume to the back of their ears.

If you used to apply perfume to the back of your ears before heading out for the day, your dog may have developed an addiction to the scent and will always be tempted to nibble on your ears when given the chance.

He Is Showing You How Much He Loves You

Dogs nipping at their owners’ earlobes are often taken as an indication that they are being aggressive towards their owners. In fact, this isn’t true at all. Gentle mouthing by a dog is a gesture of affection.

So, if you notice that your dog likes to nibble on your ear when you pet him, he is trying to express his love for you.

Mouthing on your hands, legs, arms and ears is his way of trying to show you some love and to let you know that he cares about you.

He Is Going Through Teething

Teething is a normal stage in the development of a puppy and the reason why your dog might be nibbling your ear is because of his teeth discomfort.

It’s a stage where the puppy’s teeth are just coming in, and they’re still tender. So, when your puppy is teething, it hurts, and he will want to alleviate the pain.

Teething in puppies usually begins at about 3 weeks, and by around 6 weeks, they will have all their deciduous teeth in place.

You will likely see your dog start chewing on things at this stage, which can include things like toys, bedding, clothing and even furniture. And of course, if you are just beside him, he may even mouth your hands, legs and arms and nibble your ears.

What you can do is to provide him with some safe chewing toys for him to ease his teeth discomfort and keep him in his crate if you are not there to supervise him.

This will prevent him from getting his mouth on something that could cause an injury or harm.