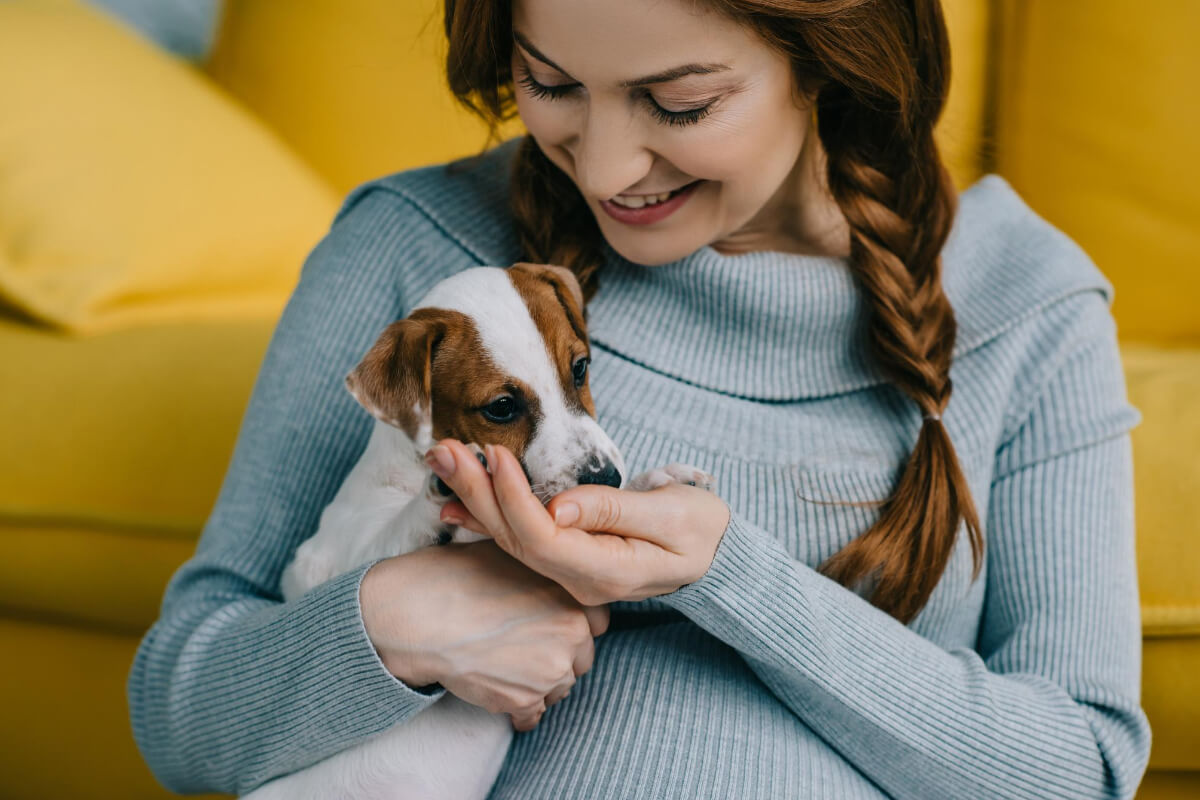 Since dogs don’t have hands and fingers to feel the things around them, mouthing becomes a common behavior for them to interact with the world. Even though this behavior isn’t dangerous, some owners find it to be annoying

While most dogs will eventually outgrow this behavior after they have grown out of puppyhood, some dogs never outgrow this habit and continue to have soft mouths in their adolescence.

The purpose of this article is to explain why dog mouthing happens, what you can do about it, and should you be worried about that?

Dog mouthing is a behavior in which a dog uses his mouth to play with objects or people. Soft-biting could occur on a person’s hands, wrists, arms, or legs. This behavior is often a sign of affection, excitement, curiosity and playfulness, but it can also be caused by boredom, aggression, separation anxiety or learning biting inhibition in puppyhood.

He Is Feeling Excited

It is a common misconception that dog bites are always negative. In fact, it is a normal and expected behavior of dogs.

During times of excitement, dogs may mouth objects or people they are interacting with. That is why you will often see this “play-biting” behavior when dogs greet each other or when your dog is excited about seeing you.

This is especially so if you have been away from home for quite a while and your dog misses you badly.

A dog’s day is longer than a human’s, which is why he misses you so much!

In fact, an hour of human time is equivalent to 7 hours of your dog’s time. So, if you have been away for a week, your dog could have felt that you have left him for 1176 hours!

Thus, it is natural for him to feel excited and happy when he sees you back home and jumping up on you and mouthing you is his way of greeting you! He is showing affection towards you.

If you want him to stop this behavior, you should not reward him with your attention.

Pay no attention to him, and he will learn to associate this behavior with unpleasant experience and that will deter him from repeating this act.

Therefore, your reaction to his behavior plays a vital role. You should not reinforce the behavior that you want him to correct.

Playfulness and Curiosity Are in Their Nature

Dogs have a natural curiosity and playfulness that leads to play-biting. This is how they interact with the world and communicate with their peers and humans.

Interestingly, play-biting is not just a way to communicate, but also a way for dogs to socialize and have fun.

As a matter of fact, play-biting is an instinctual behavior. This means that it is not learned and cannot be stopped. It is an innate behavior that dogs do naturally.

The natural instinct to bite or nip comes more naturally from breeds with a high prey drive, such as Collies, sheepdogs, and cattle dogs.

It is believed that dog mouthing plays an important role in helping dogs bond with their owners.

This Is Part of the Puppy’s Growing Phase

It is important for you to recognize that this bite-inhibiting behavior is an important part of a puppy’s development and is very similar to children’s play.

You should not stop this behavior or punish him for doing so. In fact, it is often the only way for a young puppy to learn soft bite.

Bite inhibition is usually learned while puppies play with each other. As puppies play, you’ll see lots of chasing, pouncing, and wrestling along with biting.

This is when they will pick up the right strength to bite so as not to hurt their little friends.

And if you are the only one with him in the house, he will likely “pick” you as his bite inhibition target and may nibble on your ears, hands and legs.

If you notice that your puppy is biting too hard or if he is hurting you, you can use this method to teach him to bite lightly.

Let your dog mouth on your hands when you play with him until he bites really hard.

As soon as he does it, yell loudly, as if you’re hurt.

This will certainly startle your puppy and make him let go of the biting. Reward him as soon as he does that.

Resume with the play after giving him the reward and yelp again if your dog bites you again.

Keep repeating this training process for at least 3 cycles per day till your puppy learns to control his biting strength.

You Have Make This Behavior a Positive Experience for Him

When your dog put his mouth on your hand, did you pet him and give him your attention and affection?

If you have done so, that will explain why he keeps repeating this act whenever he is with you.

You’ve made this behavior rewarding to him, and he will be eager to repeat it in order to reap the rewards.

Therefore, be mindful of the response that you are giving to your dog on his behavior. If you react negatively (stand up and walk away without giving him any attention), he will then associate this act with being rejected by you.

This will send a signal to him that you don’t like him doing this and that he should stop behaving in this way.

Boredom Has Set In

When a dog gets bored, he will find ways to keep himself entertained and will often resort to chewing on things that he has access to or even mouthing your hand and legs just to get you to play with him.

Puppies and active dog breeds, such as the Poodle, Beagle, and Dalmatian, are susceptible to this problem when they do not get sufficient exercise to release the pent-up energy in their bodies.

To alleviate your dog’s boredom, you should ensure that he is getting enough exercise.

You can include physical games such as playing fetch, hide and seek and tug-of-war in your dog’s daily routine. This will not only keep him fit but also help him to get some mental exercise too.

You can also teach your dog different tricks that can be done at home to keep him mentally simulated.

Keep in mind that a well-exercised dog is less likely to have unwanted behaviors.

Dog mouthing can also indicate anxiety. If your dog frequently mouths you, he may be anxious about something in his environment (if you have just moved to a new house), or suffering from separation anxiety (if he is being left alone most of the time).

He is performing this soft bite just to get your attention.

If you find your dog starts to mouth on your arm or leg when he sees you leaving the house, it is likely that he is afraid of being left alone in the house and is trying to make you stay with him.

This could be a form of separation anxiety disorder that you need to address.

Here are a few signs that your dog is suffering from separation anxiety:

While you can’t control your dog’s actions, you can take steps to correct any negative behaviors that he is exhibiting.

Show You His Happiness

Dog mouthing is often an indication that your dog is happy to see you and wants to be near you.

It usually occurs during a play and is a common behavior among puppies and young dogs. When your dog gently bites your leg or arm, it’s a sign of affection and trust.

His body language will be as followed:

His mouth is soft and partially open with relaxed ears that are not drawn back or tense. Generally relaxed and confident posture, with a raised head, relaxed tail and calm stance

Dogs are generally harmless when they mouth. If it lasts only a few seconds, it is an indication of affection and not aggression.

However, if the bite causes you pain and discomfort, and he is showing the following behaviors, it can be a sign of aggression.

Looks out for aggressive signs such as staring, barking excessively, yelling, growling, snapping, standing upright, holding his ears up, and moving his tail stiffly from side to side while carrying it high.

A dominant aggressive dog may, however, not show any signs of aggression before biting.

Dog mouthing in this case can be a sign that your dog is feeling uncomfortable with his surroundings and is feeling threatened.

If your dog has been aggressive towards your hands or arms, there may be a reason for that.

Maybe he was raised in a hostile environment. Or maybe he had been abused as a puppy by his previous owner.

This is an aggressive behavior issue that you need to address through obedience and socialization training.