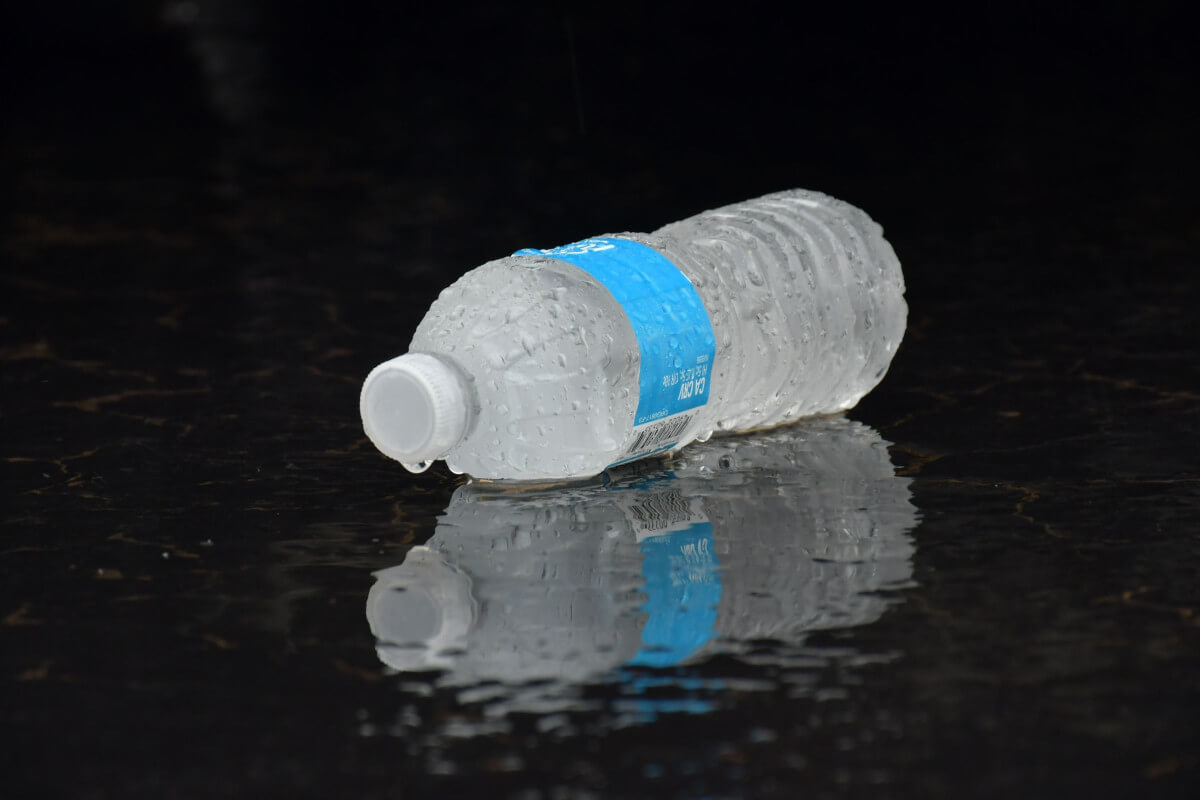 You may be wondering why your dog loves plastic bottles. Is it because they provide him with the chewing texture that he is looking for, or he loves that satisfying crunchy sound when he chews on them?

Well, there is certainly more to this. So let’s read into your dog’s mind when he sees a plastic bottle.

The size of the water bottle makes it easier for your dog to chew on, and he gets a sense of “victory” when he succeeds in ripping it. The texture of the plastic bottle gives him the chewing excitement and with the crunching sound that the bottle generates, this thrills him even more. Psychological or Pica disorder could also be causing this behavior.

Feeling Of Victory In Ripping The Bottle

Your dog gets his sense of victory when he can easily puncture a plastic bottle and rip it into many pieces.

It doesn’t take an aggressive chewer to easily destroy a bottle since the plastic is so thin.

This sense of accomplishment makes him happy and proud of himself as he will not be able to achieve that “success” with his chewing toys as they are too tough to rip into pieces (which is why they are designed and built for dogs to chew on).

As a workaround solution to address your dog’s chewing problem, you can get a Crinkit which will allow you to place the water bottle inside it and keep your dog safe from ripping off the bottle.

Crinkit is made to withstand the pressure of the dog’s teeth.

Plastic Bottle Offers Him The Chewing Texture He Is Looking For

In this case, he finds satisfaction in biting into the bottle as it gives him that enjoyable chewing texture and a nice crunchy sound when he bites into it.

You see, dogs enjoy chewing to keep their teeth clean and in good shape and the soft plastic bottle makes it a perfect chew “toy” for your dog as it makes a nice crinkling noise when he gets his mouth on it.

He loves the feel of the plastic bottle against his teeth and enjoys the chewing texture.

This makes him get smitten with these crinkly, crunchy “toys”!

This is especially so if your dog is in his teething stage. Dogs start their teething as early as 3 weeks old and the teething process could last up to 9 months till all their adult teeth are fully erupted.

During this period, your dog will feel great discomfort in his mouth, and you will find him chewing on things such as your shoes, bed, furniture, plastic bottles or anything that he can get his mouth on.

Teething is a painful time for your dog, and it is even more so if he is still a young puppy. Make sure that you have prepared some safe chewing toys or foods for him to chew on during this time.

Teething-friendly foods include carrots, frozen mini-bagels, and frozen fruits. These treats are not only tasty for your dog, but they’re also durable, so he can chew on them for a longer period of time.

Alternatively, you can get him some chewing toys such as Nylabone KeyRing Bone, Teething Dinosaur, KONG Puppy Binkie, Rope Chew Toy or Teething Stick.

These toys are made of high-quality TPR (Thermo-Plastic-Rubber material), making it safe for your dog to chew on and play with.

Not only are plastic water bottles small enough to be held in your dog’s mouth, they are also relatively easy to chew.

The crunching sound of the plastic bottle when he gets his bite on it makes him feel so delighted.

And when the noise gets louder, he gets more satisfied and excited. This makes your dog grow his like on the bottle and see it as his favorite chewing toy.

Being compact, the water bottle can easily be tossed around the room and that makes your dog feel ecstatic as he sees it spinning on the floor.

A Bad Habit That Your Dog Had Picked Up Since Young

If your dog has developed the habit of biting on plastic bottles when he is still a puppy, this behavior becomes a stimulant that awakens his bottle crunching desires whenever he sees any bottles even as he grows up.

He would love to chew on it and will not leave it alone until he is done with it! (completely ripped it down to pieces).

This is certainly a behavior that needs to be corrected, and you can make use of more appealing chewing toys such as ring bone, chewing rope or sticks to get him interested in them and gradually do away with the plastic bottles.

Keeping them (plastic bottles) out of reach from your dog or spraying them with bad tasting repellents (that your dog hates) would discourage him from this chewing habit since he can’t get his mouth on them.

Because this bad habit has been going on for quite some time (since he was young), it will take a while to break it!

Just like humans, we have our own preferences when it comes to things that we like. That applies to dogs as well.

It could be the sweet scent on the plastic bottles (if that is used to store some sweet beverage) or the cooling sensation on the bottle when he chews on it that excites him.

If you are worried about his safety, just make sure that you have the plastic bottle placed in a Crinkit before letting him “play” with it.

Another explanation for his preference is the result of his curiosity. He is curious about what you are drinking and is fascinated by it.

As his pack leader, your dog will think that you are eating and drinking good things, and he certainly wants to get his share of that.

That explains why he goes after the empty bottle once you have finished the drinks.

He Has Pica Disorder

Pica is one of the common conditions that can affect a dog.

It is a disorder that is characterized by an insatiable appetite for inedible items such as plastic bottles and bags, gravel, sands, mud, papers, tree bark, electrical cords, crayons and ashes.

If you find your dog eating these inedible items insatiably, you should take him to a vet immediately.

Pica is not something that should be taken lightly. If your dog is chewing on something that is not edible, it can lead to serious health problems such as digestive tract blockage, which can cause vomiting, diarrhea, and even death.

Some dogs will also chew on the bottle if they have some psychological problems like separation anxiety, or boredom.

So it is important to understand your dog’s behavior and figure out what could be the cause.

If you have not set aside adequate physical and mental simulation exercise for your dog, he could be feeling restless and that could lead him to excessive chewing as well as behavior problems such as barking and jumping on you.

So take care of your dog by giving him more attention, exercise and mental stimulation.

Physical games such as tug of war, playing flirt poles as well as agility training are good for your dog to exercise his body and provide an outlet for him to release his pent-up energy in his body.

Mental simulation games such as playing with puzzle toys and conducting obedience training on him are equally important as it helps in stimulating your dog’s mind and keeps him mentally tired.

If your dog is suffering from separation anxiety, he might have been scared or stressed by your absence, and you will need to work on ways to ease his anxiety.

Crate training will be a good start if he has been struggling with this problem. Once he sees the crate as his den, he will know that he has somewhere safe and comfortable to retreat to whenever he feels anxious or needs a break.

However, crate training is not always an easy process, and it might take some time for you to see success.