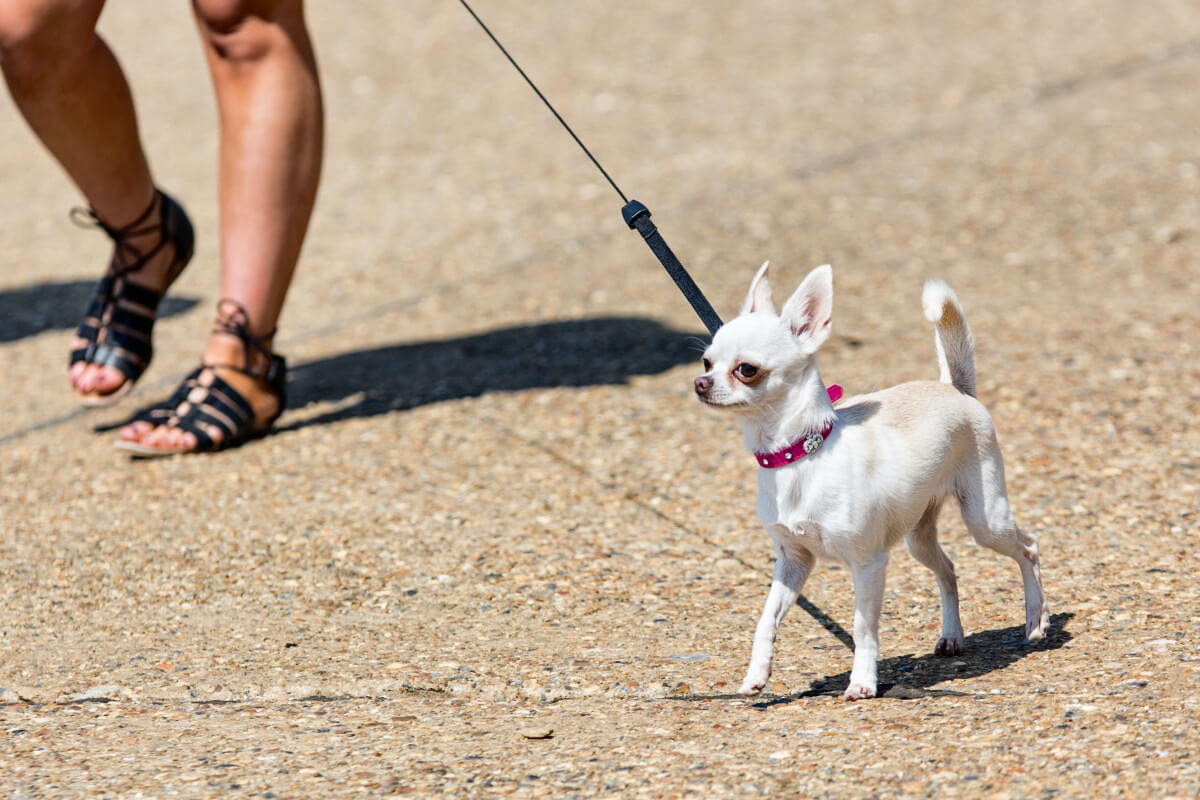 You may wonder why, sometimes, when you take your dog out for a walk, he starts jumping and biting you.

This behavior makes you feel uneasy, and you will want to know what causes this act and how to address it?

Your dog will jump and bite you during a walk if he sees you as his playmate, or if he is not yet trained to socialize and turn aggressive as he reacts to the “outside” world. He could be too tired or too hungry and want you to carry him. He wants to explore his surroundings but is restrained by a leash.

He Sees You As His Playmate

When your dog is prevented from having much social activities and exercise, he will be more likely to get bored and frustrated.

That is why he gets very excited when you take him out for a walk. Excitement will make him want to have some fun.

And he sees jumping and biting you as a form of play.

The more that you try to make him stop this behavior, the more he thinks that you are “engaging” with him.

He sees you as his playmate rather than his Alpha!

He doesn’t know that you are unhappy with his behavior and want to put a stop to it.

So it is very important that you make sure that you are NOT doing anything that is going to further positively reinforce his “playing” action, such as giving him attention in the form of “talking” to him, “pulling” him or even offering him treats in an attempt to calm him down.

This will give him the wrong idea that you are playing with him.

What you should do is to ignore him when he is getting too excited.

This way you are showing him that you don’t like what he is doing, and you are just going to leave him alone and let him calm down.

When you see that he has calmed down, then you can reward him.

This will make him learn that by remaining calm, GOOD things will happen.

This could be the case when he has not yet learned how to socialize and overreacts when he is out for a walk.

Everything outside your home seems so different to him.

The sight of moving objects such as cars and cats, smell of exhaust from cars and the taste of grass looks so different.

His mind is overwhelmed with these stimuli and makes him feel so lost in the new environment.

This is when he will turn aggressive and start to jump and bite you as a way to protect himself.

This is a time when you need to start him on socialization training so that he knows how to handle triggers and maintain calm in the new environment.

You can use the following technique to make him feel secure at home and give him confidence to leave the house.

The first thing to do is to let him smell the familiar smells of the house. Let him know that he is at home and this will help him relax.

Then take him out for a walk in less crowded places, such as a quiet street in your neighborhood.

You can also teach him how to walk on a leash by gently pulling his lead towards you.

To Break Free From the Leash

Guess what a dog will do when he is too energetic?

He would want to run about and explore the surroundings.

And when he finds himself restricted by the leash that is in your hand, he will likely try to break free from it.

This is when he starts to turn aggressive on you, jumping and biting you.

What you would need to do is to help him drain off some pent-up energy right before the walk so that he will not be so active.

This can be done by playing a game of fetch for about 10 minutes right before the stroll.

You just need to throw a tennis ball or stick for him to fetch, and you would be amazed at how much this does wonders for him.

Keep the session less than 10 minutes as you would not want to overtire him before his walk.

He Is Too Tired To Walk

Your dog is tired from playing, and he is too tired to walk.

By jumping and biting on you, he is telling you to “carry” him as he doesn’t want to walk anymore.

This is often the case when he overexerted himself while you take him out for a play.

If he had been running after other dogs or chasing after squirrels or cats in the park, he is likely going to be exhausted by the time you bring him home.

If your dog doesn’t want to walk anymore, it means he wants to rest and if you force him to walk, that is when he will start to jump and bite on you.

Let him rest for a while, then attempt to make him walk again.

Also, do a visual check if he has suffered any injury to his paws during the play and that makes him in pain when he walks.

If your dog don’t walk because he is in pain, or he is totally exhausted, you would just have to carry him back home.

Remember to bring him to a vet for physical assessment if you find any injury on his paws that needs immediate medical attention.

Hunger Is Too Much for Him

There is a saying that “A Hungry Dog Is An Angry Dog“.

If you attempt to take your hungry dog out for a walk right before his meal, you will find him to be very hostile and inclined to bite.

He will be in no mood to walk or even to listen to your commands.

He is too hungry to care about anything else.

The same is true for you. Think of the time when you are too hungry, would you still care for any walk?

Your dog will start to react aggressively if you still force him to walk despite his hunger.

You should not expect a hungry dog to be friendly.

So make sure that you take him out for a stroll ONLY after he has had his meal.

Your Nervousness Triggers His Anxiety

It is important that you, as his owner, maintain your calm energy as you take him out for a walk.

You see, your dog is an extremely sensitive animal. He will monitor your emotions and react accordingly.

If you are in any way tense or upset, it will affect him greatly.

His anxiety will be heightened if he senses that you are nervous as well.

He will then begin to feel worried and start to act aggressively.

If you are not careful, he may bite you as well.

So the best thing you can do is to keep yourself as calm as possible. This will help to control the situation.

If you are able to maintain your composure, your dog will soon follow suit.

You Are Forcing Him To Walk With You

Did you ever encounter a situation when your kid refuses to leave the playground as he is simply too obsessed with playing, and he doesn’t want to leave?

This might also happen to your dog if he is too engrossed in his playing, busy chasing after other dogs and playing with them.

If you attempt to force him to walk back with you, it is likely that he is going to retaliate and bite you.

So, how do you get him back?

To do this, you should try to make it fun for him by offering him a small treat to get his attention.

The goal is to make him know that giving you his attention and following you is going to be much more rewarding than playing in the dog park.