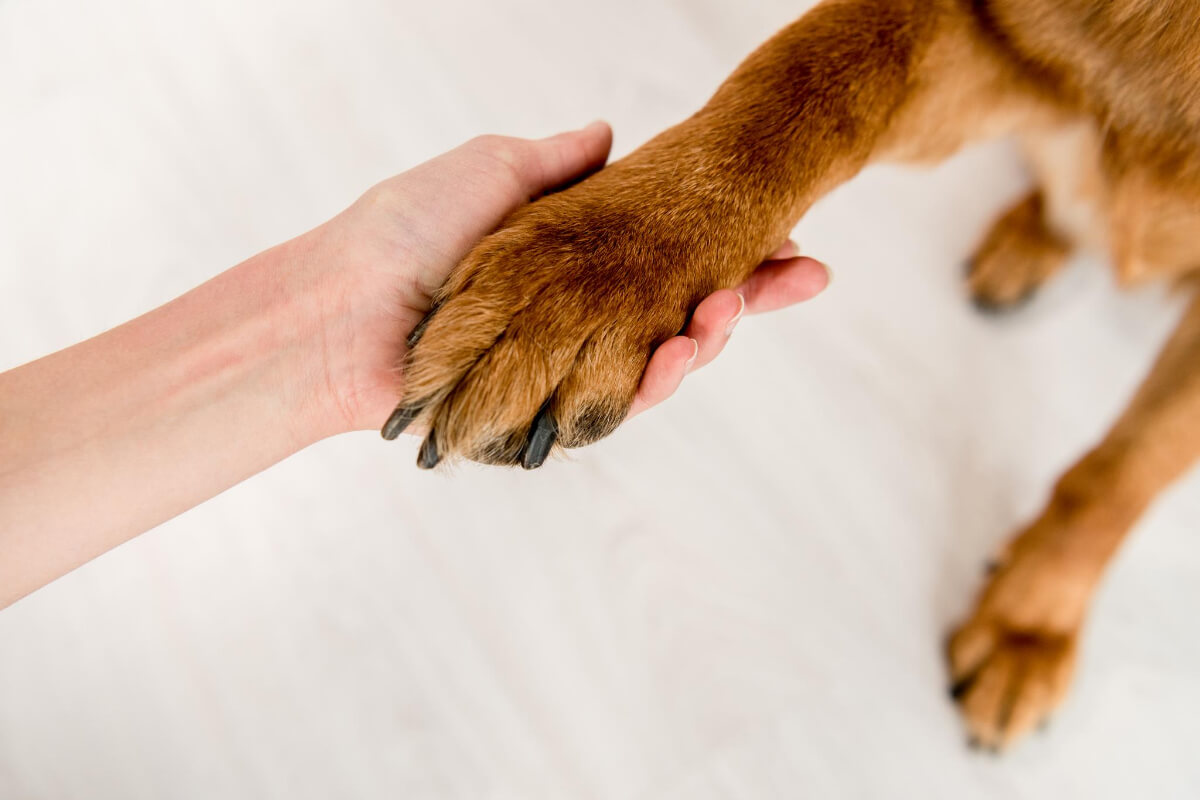 There is no doubt that dogs love to nudge us and the reason why your dog holds your hand is quite simple, it’s because he wants you to pet him.

Is that the only explanation for this behavior? Let’s find out through this post.

Your dog will hold your hand when he needs your assurance that you are not ditching him. Your dog sees your distress and attempts to comfort you. He wants your attention to attend to his needs. It is a rewarding behavior for him. It is an act of dominance, and he sees you as his property. He’s part of a breed that loves using his paws.

He Is Seeking Your Assurance That You Are Not Ditching Him

If your dog is left alone for a long time, he will feel insecure, and holding your hand when he sees you again can help him feel at ease.  He is trying to seek your comfort and assurance.

It’s also a way for him to know that you are not abandoning him and will always be there for him whenever he needs you.

Touch-oriented modes such as massaging and holding hands can release endorphins in a dog’s brain, which helps your dog to feel relaxed and at peace.

Dogs abandoned by their owners are likely to suffer from separation anxiety. They are constantly afraid that their new owners will abandon them again.

So, keep a lookout for your dog’s behavior if you find him acting abnormally, especially if he had been ditched by his previous owner before.

Symptoms of separation anxiety disorder include excessive barking, howling, accidents in the house despite being house-trained, destructive behavior including attempts to escape, drooling and panting abnormally and loss of appetite.

Here are some ways to help your dog if he is suffering from separation anxiety:

1. Make sure that he gets lots of attention from you when you are at home. Spend more time with him by engaging in his favorite exercises and taking him for a long walk daily.

2. Don’t leave him alone in the house for too long. Prepare a cozy and quiet spot for him to retreat to whenever he feels anxiety. Crates would be an ideal choice. Leave his favorite toys in the crate to keep him occupied and that will help to distract his attention from loneliness.

3. Feed him with your hand rather than leaving his food in his food bowl. This act will make him feel that you are there to take good care of him, and you will never ditch him.

4. Be sure to plan for some physical and mental workouts to help your dog release his pent-up energy. As the saying goes, “A tired dog is a good dog”, and when your dog gets to release his excessive energy, he is less likely to act out.

5. Keep a positive attitude and never lose your temper with him. It’s important to maintain a positive mood when your dog is acting out, because you need to convince him that he can trust you to take good care of him. Keep calm and let him feel your calm energy.

A dog who has separation anxiety is usually very sensitive and will pick up on any changes in his environment. So, if your dog is showing signs of anxiety, take notice and don’t let this disorder get out of hand.

He Is Comforting You in Some Way

The reason that dogs are human best friends is that they are able to sense our happiness, sadness, fear and anxiety.

They are very sensitive to the emotions of others, especially their loved ones, around them.

If your dog sees that you are sobbing in one corner of the house, he would naturally want to offer you his comfort. The way he will do it will be to place his paws on your hands and put his head on your lap.

He is telling you that he is there for you, and you are not alone. If you are shedding tears, he will even try to lick your tears to make you feel better.

When you are sad or happy, your dog will always be there to comfort you in some way or to share your happiness, no matter how many years have passed.

He will always listen to your problems, never judge you, and love you wholeheartedly.

This explains why dogs make such good companions and why they are the best friends for humans. They are loyal, loving, and devoted to humans!

Have you been neglecting your dog lately and have not given him the love and affection he is craving for?

Dogs will always give their paws as an instinctive way to get their owners’ attention. You will likely find this act to be similar to what your children will do (which is to hold your hand) when they want your attention.

If you have been busy with your work and neglecting your dog, he may paw at you just to let you know his presence.

What you would need to do is to find ways to keep him busy and help him to release his pent-up energy and keep his energy in check.

Get your dog to be involved in some physical games such as tug of war, playing fetch and chasing bubbles to help him drain his energy.

Do not overlook the need for mental simulation games for your dog as well.

It is a good idea to have a routine for your dog. This will help him to know what is being prepared for him for the day so that he can look forward to it and will be less clingy to you.

It could also be the case that he wants your help with his needs.

Run through the following list in your mind whenever your dog places his paw on you or touches you, and it will help you to better understand your dog’s intention.

A Learned Behavior That He Finds to Be Rewarding

Dogs learn from observation, and they are quick to imitate what you do, especially if it brings them pleasure.

If you show your dog affection by holding his paws and hugging him, he will “pet” you back, holding your hand to encourage you to continue.

This is his way of showing you how much he appreciates your care and attention.

He is aware that you are using your “paw” to make him feel loved, and he imitates your action to tell you that he too loves you.

This explains why your dog is so fond of placing his paws on you, just to have you shower him with love just like he does to you.

Therefore, it is no surprise to find that your dog keeps repeating this behavior in exchange for your affection.

It could also be the case that your dog perceives a human holding hands as a positive sign of affection, and he wants to do that with you.

Keep in mind that dogs are very observant creatures. They know what is going on around them, and they learn from what they see.

It Is the Act of Being Dominant

In essence, it is a display of dominance! Your dog had claimed you as property and declared his position as the alpha dog of the pack.

As a way to reaffirm your suspicions, watch out for other signs of dominance, such as:

The act of sitting on people often makes dogs feel superior and more in control and often is a sign of dominant behavior.

If your dog likes to sit on your lap and place his paws on your hand, it is signaling to other pets or family members that he is the leader.

In this instance, he perceives the position on your lap as a mark of authority and will appear aggressive toward anyone who approaches you while he is lying on your lap.

This dominance behavior should be corrected immediately through training.

To make your dog submissive, you will need to be his pack leader. This can be done in the following ways:

Breeds That Love Using Their Paws (Is Your Dog One of Them?)

Dogs communicate with their paws. It can be anything from trying to get attention, making an apology, or asking for a favor.

While most dogs express their communication primarily through barking, wagging their tails, and growling, they do use other means such as their paws to convey their needs.

This is especially true for certain breeds of dog such as Boxer, Siberian Husky, German Shepherd and Labrador Retriever that love using their paws to express themselves.

So, if your dog belongs to one of these breeds, that explains why he loves using his paws to hold your hand. It’s just an instinctive way for him to communicate with you, and show his affection and love for you.