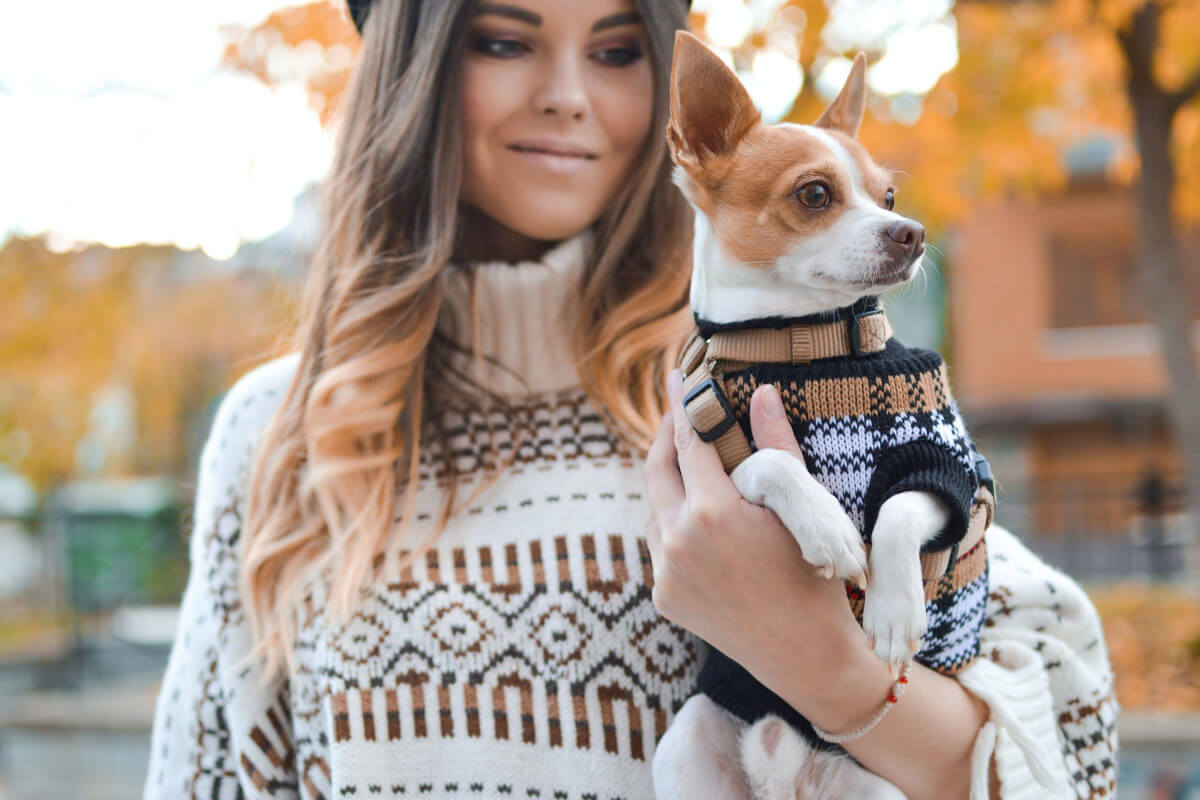 It is a common sight to see dogs of all breeds being protective of their owners when they are out in the street.

And despite the small size of Chihuahuas, they seem to do their very best to protect their owners by barking, growling, and snarling at people and other animals who come close to their owners.

That makes you wonder if this is just the natural instinct of a Chihuahua? Or could there be more to it?

The Chihuahua is a guarding dog by nature, and being protective of its owners is instinctive. Having a heightened “sixth sense” triggers their instinct for protection. They are territorial and possessive, making them over-protective of their owners. Separation anxiety and jealousy contribute to this protective behavior. Finally, the owner’s traumatic experiences drive them to protect them.

As Guarding Dogs, They Are Instinctively Protective of Their Owners

Chihuahuas are bred to be companion animals. They’re protective and will back up their owners when they see fit with their aggressive bark.

Furthermore, they are known to remain faithful to only one person, typically the one that takes care of their needs.

Because of their loyalty and witty nature, Chihuahuas are well known to be adopted as guard dogs despite their small size.

They are alert and wary of strangers, so if someone invades your home, your chihuahua will make sure everyone knows about it.

In addition, they are very loyal to their owners and very protective of them. If anyone comes too close to them, they will bark and will stay by their owner’s side even as they sleep.

The “sixth sense” is the term given to the chihuahua’s ability to sense looming danger and react swiftly.

This type of behavior can at times be overprotective because the dog is being overly defensive towards a threat that does not exist.

This can be the case where your Chihuahua feels insecure in a totally different environment with unfamiliar sights and smells and if you’re also nervous (remember that your dog can easily sense your anxiety), that will trigger his protective instinct.

He’ll then act out and start to defend you against anything that he perceives as a threat.

Many people mistakenly believe Chihuahuas to be aggressive, but in reality, this breed is just incredibly sensitive and protective of its owners.

It doesn’t take much for Chihuahuas to act over protective when their sixth sense “tells” them danger is lurking, and they will act aggressively to defend themselves and their owners.

Their overprotective nature may be due to their small size and their vulnerability to intimidation. As a result, they tend to be overprotective of themselves and those they love.

This type of aggression can be prevented if the dog is properly socialized with people and other animals.

So, it is important to socialize your Chihuahua early in his life so that he learns how to react appropriately when facing new challenges.

Territorial and Possessive Natures Lead to Overprotection of Owners

Chihuahuas can exhibit high levels of territoriality and possessiveness, as well as being overly protective of their owners.

They are not comfortable with strangers approaching them or invading their territories. This is especially true when they regard their owners as their “property” and will act aggressive whenever any stranger approaches them.

They might growl and bark at strangers and even attack them with vicious bites in order to defend their “property” (which is their owners!).

If that is what is happening to your Chihuahua, what you will need to do is to make your dog learn that YOU are his pack leader through training.

He had to be submissive, obey and follow your commands in order to have his needs met.

When he sees you as his Alpha, he will instead rely on you to protect him instead of being protective of you.

It could also be the case that you have been away for a long period of time and your Chihuahua misses you badly.

And when he sees you again, he will naturally want to ensure that you will not leave him again and will be extremely clingy and protective of you.

He will follow you wherever you go in the house and if you take him out in the street, he will bark and snarl at anyone that comes near you as he is worried that they may take you away from him.

You will need to help him overcome his separation anxiety disorder. Work on building up his confidence to be alone and to feel comfortable when you are being approached by strangers or other pets.

Make him see you as his pack leader so that he will relinquish his protective duty and be submissive to you. This will make him an obedient and well-mannered dog.

You should also reward him for his good behavior if he remains calm and submissive. This will help to positively reinforce this desirable behavior.

They Are Protective of Their Owners After a Traumatic Experience

The same protective behavior may also be displayed by Chihuahuas whose owners have been injured and feel they have failed in their responsibility to protect them.

As dogs naturally possess the instinct to keep their owners safe and sound, this “responsibility” can significantly intensify if they feel they have failed to do so.

Consequently, they develop feelings of guilt and exhibit overprotective behavior toward their owners as a result.

In order to prevent another unpleasant experience from happening, they will do everything possible to keep everyone from coming into contact with their owners.

This is their way of protecting their owners and keeping them safe.

As a Result of Jealousy, They Become Protective of Their Owners

It is common for a jealous dog to become overly protective of his owner, because he feels that the owner belongs to him and no one else should get his attention.

A jealous dog will be more likely to snap at a stranger, because he thinks that the stranger is trying to steal his owner.

Often, he will be more possessive and demanding of his owner’s attention if he has not received enough attention and stimulation.

In a household where there are other dogs and children, jealousy of a dog can cause a lot of trouble as he is at risk of snapping at them, so you ought to take special precautions.

The best way to address this jealousy behavior is to make sure that your dog gets to release his pent-up energy.

Plan for some physical games such as tug of war and playing fetch to keep him occupied.

Start him on obedience training and make him acknowledge you as his pack leader so that he will “give up” the idea of possessing you.